The best dispersant for oil on water is cooperation

In 1996, after the supertanker Sea Empress ran aground in the Welsh port of Milford Haven and caused a devastating oil spill, the UK Government set up an inquiry headed by Lord Donaldson to see what could be done to improve the country’s response to maritime emergencies.

Thus was born what is known in the UK as SOSREP, the Secretary of State’s Representative, a civil servant tasked with overseeing the UK’s response to any maritime casualty.

The first SOSREP was Captain Robin Middleton, a man I knew well while I was the environment correspondent for the London-based maritime publication Lloyd’s List. I saw him at work up close during a number major shipping casualties. He was a charismatic man with a hands-on approach to his work. He shouldered the responsibility of his decisions with the confidence and self-awareness of the seasoned professional. The value of the role was evident even for the layman.

I was thinking about SOSREP while sifting through multiple reports of last Friday’s oil spill in the Bay of Gibraltar.

The UK model seeks to ensure that decisions in a salvage operation are taken based on facts and logic, removing politics and emotion.

It is a model worth reflecting on because in the Bay of Gibraltar, where any cross-boundary action is riddled with political pitfalls, the danger is that crucial decisions and actions can be hampered by deep-rooted underlying issues unrelated to the emergency at hand.

There have been reports in the Spanish media accusing the Royal Navy’s Gibraltar Squadron of hindering Spanish salvage vessels as they tried to respond to the oil spill on Friday.

Those reports claim the Gibraltar Squadron “harassed” the Spanish Salvamento Maritimo vessels, delaying them in their efforts to assist in their response to the spill.

There is some truth in that, although ‘harassment’ is perhaps too strong a word. Initially, when the Salvamento vessel Denebola approached the anchorage where the spill had originated, it was held back by the Gibraltar Squadron. Sovereignty warnings were read out, as if it was a routine incursion.

It took phone calls from the Gibraltar Port Authority to the Ministry of Defence and on to the Foreign, Commonwealth and Development Office to defuse that stand-off. Soon after, the Spanish vessels deployed a large boom to the northeast of the Western Arm, ensuring none of the oil reached Spanish shores. 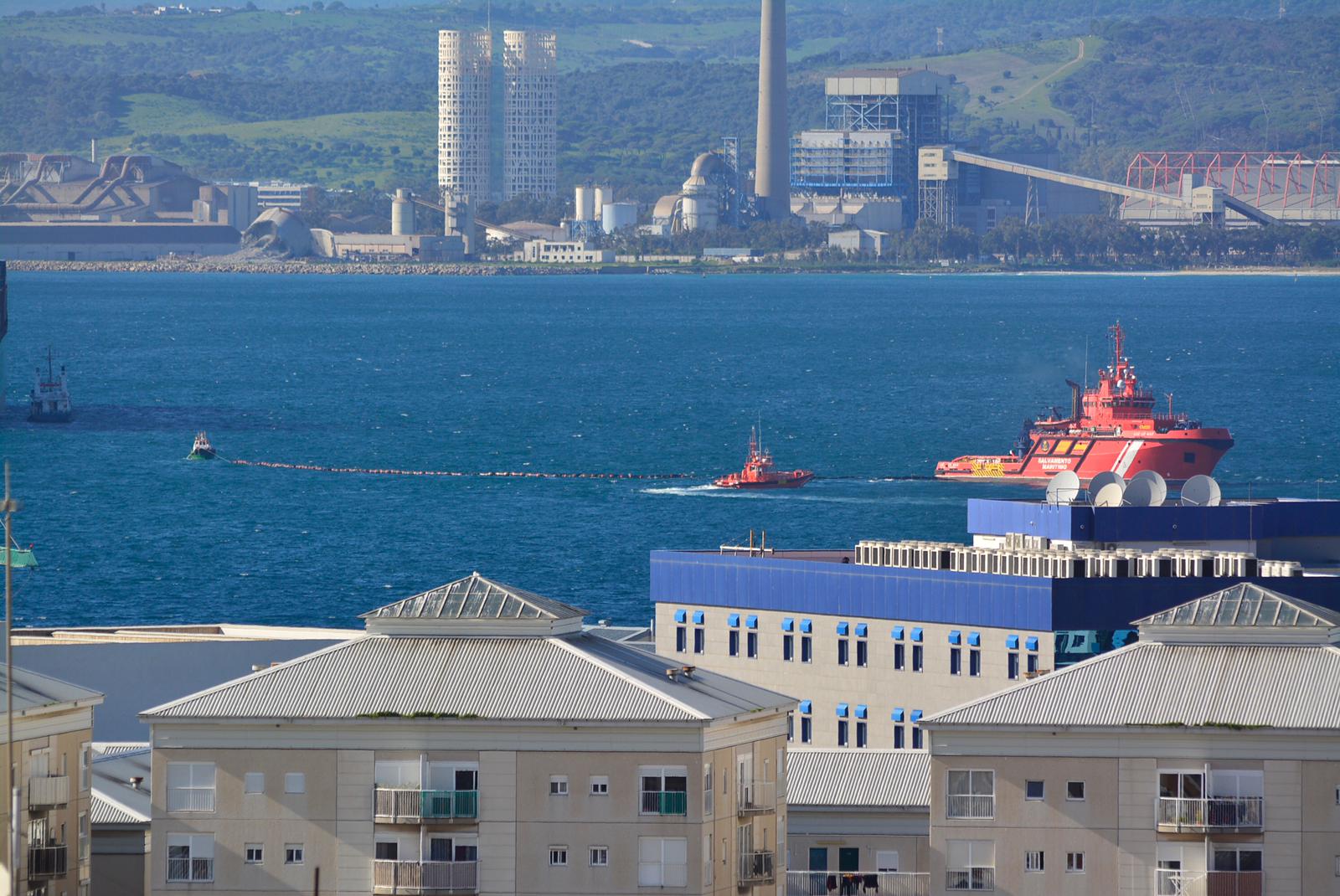 Despite the initial setback, the efforts to respond to the spill have largely proved successful. There were reports that some small patches of oil had reached shore in Spain on Tuesday, but it could have been much worse had it not been for those coordinated efforts. Understand too that the impact of what little oil made it to the beaches in Spain was amplified by politics and may not even have come from the Gibraltar spill. The Bay of Gibraltar, after all, is a very congested bay.

Oil drifted into Gibraltar’s harbour too, but even here perspective is vital. Most of it appears to have been scooped up before it reached the revetments. Of course, no one wants a situation like this. But for all the chest-beating, this was not a major spill. Without wanting to minimise it in any way, this was not the Prestige.

So for all the questions that remain unanswered about what transpired in the hours immediately after the spill, remember this: for the most part, the response was effective.

There is, however, a lesson to be learnt.

Spain’s persistent incursions into British Gibraltar territorial waters are well documented, and unfortunately set the tone for much of what happens at sea. When a country repeatedly ignores reality on the water and pretends it has sovereignty over a stretch of sea where it does not, then things become murky in practice.

But in the face of a maritime casualty – be it an oil spill such as last Friday’s, or a search and rescue operation like the one that unfolded a week earlier when a migrant boat sank and four people vanished without trace – the focus must be on cooperation.

Much as the UK SOSREP framework removes politics from operational decisions, so should Gibraltar and Spain have a framework in place that allows experts to get on with the job of resolving the problem without having to keep an eye out for political landmines.

The Gibraltar Squadron should not have to find itself in the unenviable spot of being chastised in the press for doing its job, and neither should Salvamento Maritimo find itself in the accusatory glare of an incursion when it was seeking to help prevent oil from reaching the shoreline.

Whether we like it or not, the Bay of Gibraltar is a giant maritime refuelling station. Bunkering occurs safely on both sides of the bay and generates economic activity and employment in Gibraltar and Spain. That is not going to change.

Both Gibraltar and Algeciras - the former the most important bunkering port in the Western Mediterranean, the latter Spain’s busiest port and ranked among the top ports in the world – have good systems and personnel in place to protect against what unfolded on Friday.

But accidents happen, they always do. The key is to respond accordingly and improve where possible.

Against the backdrop of talks that seek a different, more positive post-Brexit relationship between Gibraltar and Spain, perhaps those tasked with negotiating that framework should consider ways of reinforcing cross-border coordination when things go wrong at sea.

There is some precedent because in practice, when the chips are down, cooperation happens. We saw it with the Fedra incident, where the crew on a Salvamento helicopter made a forced landing at Europa Point after risking their lives to save seafarers on the ship. We saw it with the port explosion, where Spanish tugs helped control a fierce blaze. And yes, we saw it too on Friday.

Throughout the response to Friday’s incident and in the days after, senior maritime officials in Gibraltar and Spain were in constant and fluid communication, updating on the latest developments and responding accordingly. Reports claiming the opposite are simply inaccurate. Communications of this nature are recorded as a matter of routine, and this will be borne out in due course as the investigation by the Gibraltar Maritime Authority is completed.

But this dialogue between maritime officials has evolved over time organically and of necessity in our crowded bay. Without formal protocols, there is room for miscommunication and mishap. So there is scope for improvement, and few politicians will deny that.

Maritime professionals should not be placed in a position where they have to watch their backs because of wider political considerations. What is needed is a framework through which experts – and that includes the Royal Navy’s dedicated personnel - can cooperate as required and swiftly, without politics coming into the equation.

When there is oil on the water in the bay, the age-old sovereignty saga needs to be parked to one side. Everyone knows where the red lines lie, and an oil spill will neither impinge on those lines, nor resolve them one way or another.

Much like SOSREP does in the UK, the focus must be on the job in hand.