Police officer Sergeant Donovan Galia aims to complete a 24-hour fundraising cycle around the Rock this weekend to raise funds and awareness for the Gibraltar Cardiac Association.

During the event, he plans to cycle more than 200km around the Rock from 10am on Saturday until 10am on Sunday. 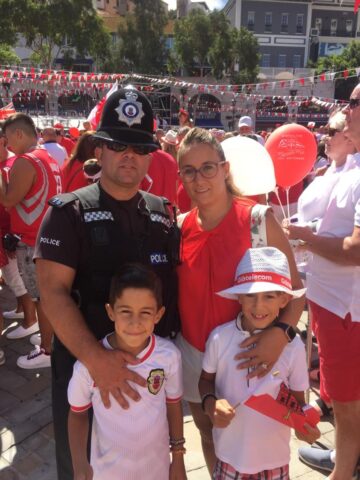 The 43 year old dad of two said he was doing it because the subject matter is one that runs very close to home.

“A number of friends and family have suffered from heart problems,” he said.

“My father (ex-RGP officer PC93 Joseph Anthony Galia) suffered from heart disease from a very young age and had his first heart attack at the age of 39.”

“I’m also dedicating this event to Tennessee Fortunato, one of my best friends who recently passed away way before his time at the age of 38. He had an undetected tumour that ultimately affected his heart, which resulted in heart failure.”

“But I was also inspired by my son’s nine-year-old friend Jamie Stevenson, who is battling a very serious illness. The manner in which he confronts and tackles his condition is commendable. He ploughs through, expecting to be treated exactly the same as others, which made me think if he can have his treatment and come to football training, I can do this 24-hour-ride. For me Jamie is a warrior and nothing short of a legend.”

Mr Galia has been training up to four hours a day in the lead up to the event and is inviting the community to join him during his challenge, which starts and ends at Casemates Police Station.

He expects the cycle during the night to be the toughest part and has wet weather clothing ready should he need it.

“I would urge all those willing to accompany me at any time of the day or night for any given amount of time, to grab their bicycle and join me,” he said.

“More importantly, I would kindly ask for your donations to this very worthy cause.”

Anyone wishing to donate to his challenge can send money direct to the Gibraltar Cardiac Association’s bank account (Gibraltar International Bank, A/C 09400001, Sort Code 608314) or donate on the day.