Air terminal staff rehearsed their response to an incident in which an aircraft experiences a minor fire on landing.

The training exercise was designed to familiarise relevant staff with passenger evacuation procedures with a further aim being to allow departments and agencies an opportunity to review and update their procedures in dealing with an immobilised aircraft.

All the organisations that operate in the direct vicinity of the Terminal including Gibraltar Air Terminal Ltd, Gibraltar Airport Fire and Rescue Service, Borders and Coastguards Agency, Gibraltar Bus Company Ltd, Gibair, AGSU, GDP and NATS Gibraltar participated, in coordination with RAF Gibraltar and the Gibraltar Civil Contingencies Department.

Terence Lopez the Air Terminal Director described the exercise as “logistical challenge” explaining that it involved getting the handling agent and everybody to react to an aircraft on another part of the airfield.

Nicky Viñales, the Senior Fire Officer at the airport, introduced the training exercise to the many dignitaries who were on site to witness the exercise, including the Governor Lieutenant General Edward Davis, Minister for the airport Gilbert Licudi, Chief Secretary of the Government of Gibraltar Darren Grech, and the RAF Gibraltar’s Station Commander Wing Commander John Kane.

“An Airbus aircraft inbound from Brussels has landed and the pilot has had to apply the brakes in a hard way and there was an indicator in the cockpit telling him that the brakes have overheated,” Mr Viñales explained.

“The Captain calls us [the fire and rescue crew] out as a precautionary measure and at that moment in time nothing happened,” he said.

“If it’s just smoking tires or brakes the fire service will respond by standing by.”

“In this particular incidence, the wheel part of it will catch fire and the fire crews will extinguish the fire.”

“Passengers will remain on board and then they will disembark in the normal manner but obviously not on the stand,” he added. 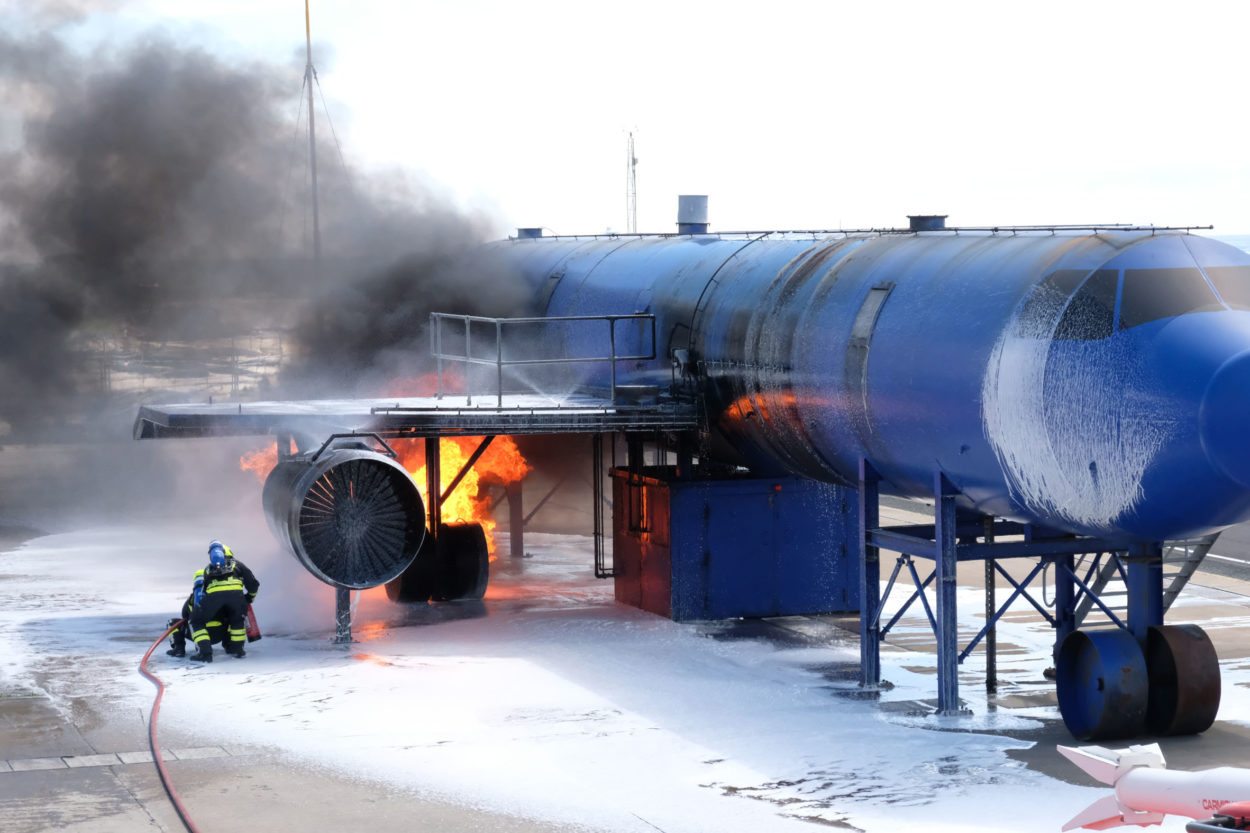 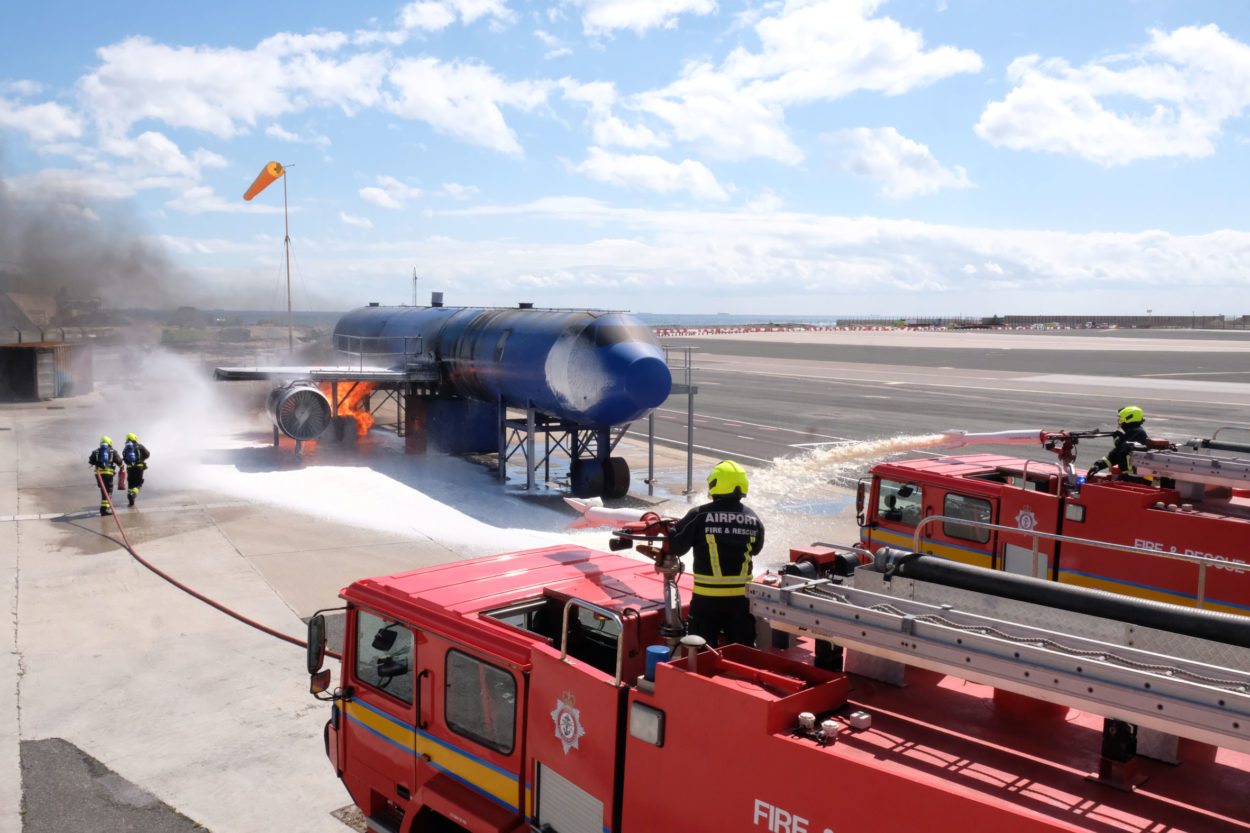 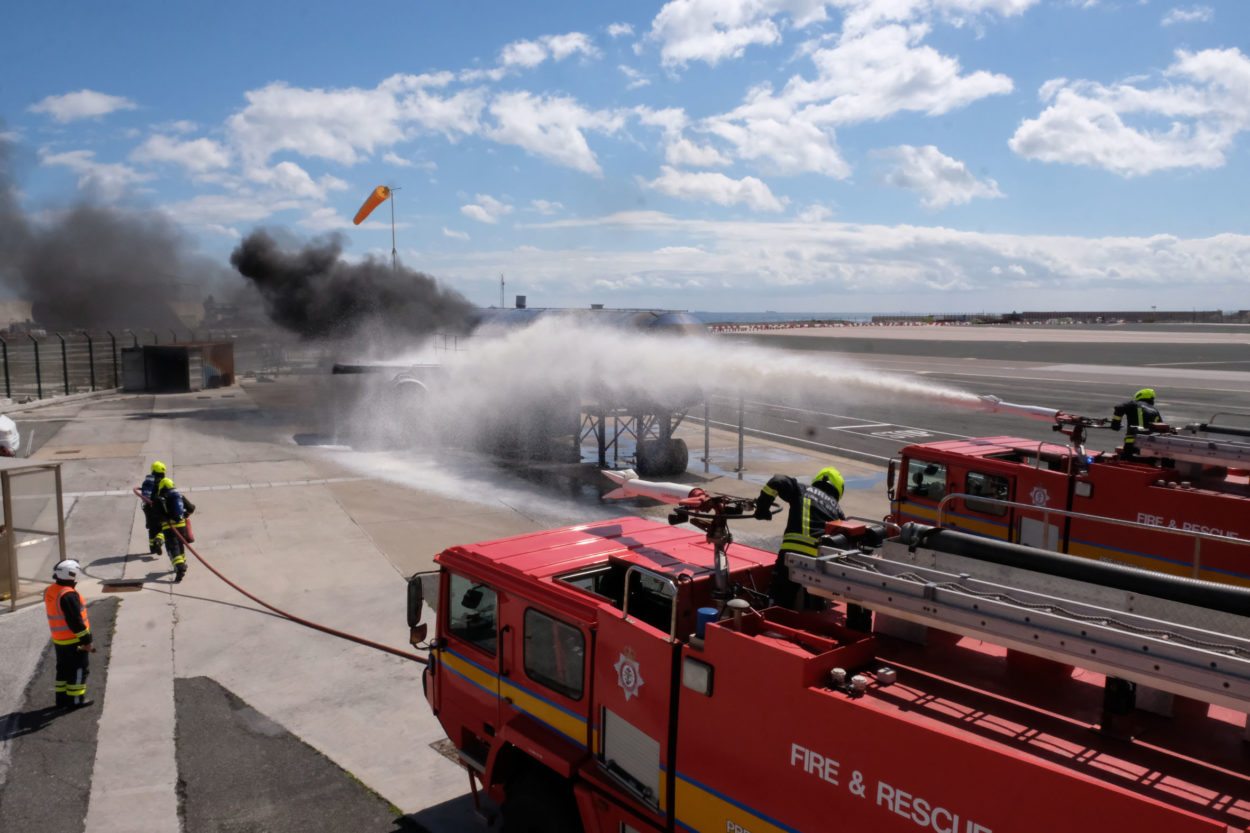 Deputy Fire Officer Adrian Hernandez added that the exercise was important in an airport that receives aircraft every day with a runway that is shorter than normal due to the tunnel works.

“If something was to go wrong the actual Captain would hit the brakes much harder than normal and that can create what we call ‘hot wheels’ which is as simple as the brakes fusing in to the actual wheel hub,” he said.

Although in the exercise yesterday all passengers were disembarked by steps, Mr Hernandez said in real life scenario they would disembark via the emergency chutes, as instructed to do so by the Captain.

Three fire engines and nine fire fighters responded to the incident, with some extra staff taking part in the exercise but not in their capacity as fire fighters.

The three fire engines placed themselves in front of the ‘plane’ with the middle one dowsing the fire and not the one nearest the fire.

Explaining the reason for this, Mr Viñales said: “In this particular case the middle one would have been protecting the fuselage from the fire had the other one on the left side had been used it would have pushed the fire towards the fuselage.”

“We always separate and push away from the fuselage.”

Mr Lopez said he was pleased with how the exercise went and explained that the civilian side of the airport works in partnership with the MoD, which means that all procedures are planned and coordinated with each other.

“From the outset everyone went where they were supposed to, the fire was treated as it should have. Sometimes you may feel there is a time lag but the fact the area needs to be made safe for everybody before we let anyone into the hot zone where the fire and rescue is. You have to make sure there is no danger to anybody else,” said Mr Lopez.

Gibair is the handling agent, “they would handle the aircraft and passengers exactly how they would on the apron,” said Mr Lopez.

“You had medics from Air Traffic Control who would deploy and create an incident control point which is the focal for any emergency services arriving at the incident.”

“The Defence police were here today in their capacity as escorting some of the vehicles through because we are not playing ‘Live’, we are playing on a normal day. But, the defence police would form part of cordon and control on a normal incident.”

“The borders and Coastguards are normally out here manning our apron and they deploy as an extra form of resources,” he added.