An environmental organisation set up by Jess Leaper from the Alameda Wildlife and Conservation Park is in the crucial final stages of a public vote for essential funding from European Outdoor Conservation Association [EOCA].

The organisation, Whole Wild World, is currently number three of six projects shortlisted in the category ‘Wild Places’ for EOCA funding of up to 30,000 euros.

The organisation is looking to rewild and area in the Algarve which is currently the size of Gibraltar’s Nature Reserve.

“It is an ecosystem restoration project which will work to protect vulnerable and important species such as the Iberian Lynx, European rabbit, European otter, wild boar, roe and red deer, Eurasian black vulture, Griffon vulture and Egyptian vulture and the Sorraia horse an almost extinct breed of wild horse. And countless other species of flora and fauna; as well as becoming a centre for eco-tourism,” said Ms Leaper.

The name Whole Wild World comes from when Ms Leaper was a child and used to tell her mother she was the best mum in the “whole wild world”, unaware the word should have been wide.

She believes this shows that her passion for animals and the environment started at a young age.

Ms Leaper is joined by other local environmentalists and conservationists to help to make the ‘world, whole and wild’ again.

It was a chance meeting with a man who owned some land in Portugal that started the project.

He came into the AWCP before lockdown looking for interested parties in landscape restoration.

“So looking at Iberian species, European rabbits, Quails that feed because it is near for one of the release sites for the Iberian lynx so it can help feed those because that project is doing really well,” she told the Chronicle.

“Because obviously if we are going to start releasing animals into an area they need to have their habitats restored.”

Ms Leaper is an advocate of restoring habitats and not just focusing on single species.

“You have to see the bigger picture. I really struggle with single species conservation and we have to start restoring habitats,” she said.

The project will focus on the rewilding of the area in line with the United Nations ‘Decade for Ecosystem Restoration’ incentive announced earlier this year, which aims to prevent, halt and reverse the degradation of ecosystems on every continent and in every ocean.

“The need to protect and restore our native habitats is imperative,” said a statement from Whole Wild World.

“Rewilding means allowing nature to restore and recover and where needed, giving a helping hand, reintroducing species of flora or fauna that may have disappeared from that ecosystem and restoring balance once more. Nature based solutions also offer communities that have been lost, due to rural depopulation and farmland degradation, the chance to recover and benefit from the revival.”

At present the land has trees that are not conclusive to being part of the habitat despite being a native species.

These trees had been planted decades ago because the land had become so degraded by farming.

The trees look more like a plantation than a natural habitat.

This is just one element of the restoration work needed in the area.

The reintroduction of species is also imperative but also very tricky.

At present Whole Wild World has secured a native stallion Sorraia horse but until they can find a mare for it to be coupled up with, they cannot place him on their land. 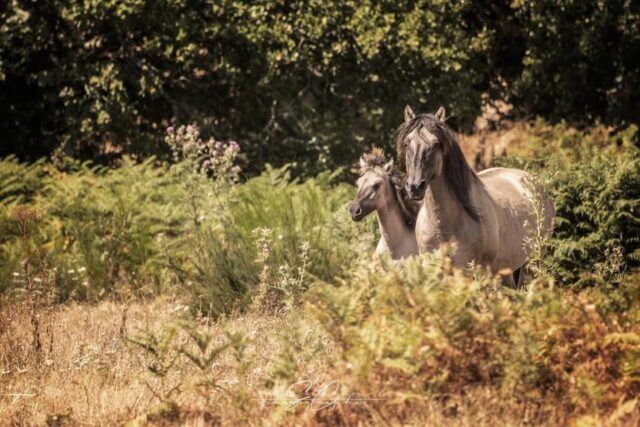 It is little intricacies like that that make the project complex, but also highlight how vital it is to get it right.

It is not just about the animals and the habitat, there are also benefits to humans from such a project.

“We do look at long term opening up and working with other land owners in the area because one of the aspects of the project is looking at mental health and nature based tourism,” said Ms Leaper.

“And also keeping local communities alive or providing communities as well as landscape because the area is very degraded, so people have just moved back into cities.”

“Covid has compounded that as well so people are struggling in the area,”

The Whole Wild World was shortlisted from over 250 projects for the 2021 EOCA European Outdoor Conservation Association public vote which closes at noon on Friday, October 29.

Go to https://www.eocaconservation.org/project-voting-category.cfm?catid=3 to vote.