It was a book all about Earth from his school library that fired up a young Brian May’s imagination. He read it cover to cover, over and over. The author was Patrick Moore, who began presenting ‘The Sky at Night’ on BBC in April, 1957, when May was just nine years old. Keeping the same role for 55 years, Moore became one of the best-known figures on British television. He spoke with great enthusiasm and yet so fast that at times one could barely follow what he said! Famously, he wore a monocle (it is a fact that he owned several and kept them in a special stand). Only once missing a show (due to illness), Patrick Moore took ‘The Sky at Night’ into the record books: it became the longest-running programme with the same presenter in television history.

On the show’s 700th episode, in March 2011, the same Brian May - he has a PhD in astrophysics but is rather better known as a rock star - was one of the guests. He told how in 1969 he had been thrilled to watch the BBC coverage of the Moon landing, also presented by Patrick Moore. (In fact, two future members of the group Queen watched the programme together that day: May was with his friend Roger Taylor.) All the guests on ‘The Sky at Night’ anniversary agreed that it was Patrick Moore, as author and presenter, who had inspired their passion for astronomy. In May’s case he also shared with Moore a love of music. Moore played piano (remarkably, he once performed as accompanist to Albert Einstein, who played violin) and also, with much dedication, the xylophone. In 1982 he even played this instrument at a Royal Command Performance.

No doubt Sir Patrick (he was knighted in 2001) would be fascinated by NASA’s latest mission to Mars, its Perseverance rover successfully landing there about two weeks ago. Also in the news, although its dramatic Starship SN10 prototype caught fire and exploded, is Elon Musk’s private company SpaceX, with a lunar voyage planned for 2023. The Moon was a particular love of Moore’s, and it was his ‘Guide to the Moon’ (1953) that really launched his literary career.

In his autobiography ‘80 Not Out’ (a cricketer himself, and a fan, Sir Patrick had recently turned eighty - this was in 2003) Moore writes that “the only game in which I really could claim to be fairly good was chess, which has always been a hobby of mine.” He learned as a young boy. In his book Moore even gives the moves to a game he won, playing, as he calls it, the “Demented Opening.” I tried following the moves but it is impossible to establish what happened, as the notation given is wildly incorrect. (Hopefully this was amended in subsequent editions!) The index of ‘80 Not Out’ includes many famous names, people that Moore met and in many cases was good friends with. Some, like Neil Armstrong, Buzz Aldrin, Carl Sagan, and Arthur C Clarke appeared on ‘The Sky at Night.’ Moore met both aviation pioneer Orville Wright and Soviet hero Yuri Gagarin, the first human to orbit the Earth.

Patrick Moore was always ready to help out with publicity events, such as at the special Hastings Centenary Congress of 1995, where he played a ‘living chess’ exhibition game with Russian grandmaster David Bronstein. Exactly forty years earlier Moore was one of the founding members of East Grinstead chess club (in West Sussex), later becoming President. Another time at Hastings Moore was pictured with a young Nigel Short in a publicity shot before the first round. There is even a Sir Patrick Moore Cup, which the astronomer presented to Sussex Junior Chess (another organisation he was President of), and which for some years was awarded to the winning team in a match between Sussex and Irish juniors.

In 2006 my friend Carl Portman wrote to Sir Patrick after reading his autobiography, and offered to play correspondence chess with him. This led to an invitation to ‘Farthings’, Moore’s home in Selsey, West Sussex. Carl and his wife Susan remember their visit fondly. The chess pieces on which Carl and Patrick played were ones the astronomer took special pride in, and had been found by him at a London market when he was very young. The chess board had a different provenance: Carl remembers Patrick telling him he purchased it in Gibraltar! It was from his home that ‘The Sky at Night’ was recorded when Sir Patrick could no longer make the trip to the BBC studios.

Almost everything that Patrick Moore wrote - books and private letters - came into existence through the medium of an old (1908) Woodstock typewriter. It is astonishing to learn that having acquired it when he was just eight, and taught himself to touch-type, Moore then stayed loyal to the same machine all his working life. The ribbon, he tells us, needed changing “about once a week.” Moore loved cats (“a catless house is a soulless house”). His mother, Gertrude, to whom Moore was devoted, lived with him, reaching the age of 94. She painted watercolours, which were framed and hung on the walls, and which were also published in a book - when she was 87! When they were barely in their twenties Lorna, Moore’s fiancée, who worked as a nurse in London during world war two, was killed in a German air-raid. Moore decided that he would not marry another girl, and so remained a lifelong bachelor.

On a train from Moscow to St Petersburg (or Leningrad, as it then was) in the 1960s, Moore entered a carriage to be greeted by a pipe-smoking Russian who, unfortunately, spoke no English. Moore knew no Russian, and it seemed their journey together would necessarily be of an unsociable kind, until the other man produced a travel chess set. In Moore’s words, “We had a most enjoyable three-hour battle, ending in a honourable draw.” Upon arrival they shook hands, smiled at each other and parted. “I never did know his name!” says Moore.

Pam Thomas, for many years Publicity Officer for the Hastings Chess Congress, remembers Sir Patrick as a kind man, charming, “no trouble to entertain”, who gave his time and who was always friendly. His at times rather eccentric flourishes endeared him still further. Another of my friends, Vernon, who at the time of their meeting worked for Yorkshire Television, describes Sir Patrick as “a smashing, fascinating man.” Producing the show ‘Through the Keyhole’ they were shown round ‘Farthings’, which Vernon calls “one of my favourite three houses to ever film in.”

Today’s puzzle comes from Carl, mentioned above, who posted it on his Twitter page this week. The task is: White to play and force checkmate in two moves. It was composed in 2002 by English chess problemist David Shire. I am sure Patrick Moore would find the unusual traffic jam down the g-line amusing! Only one White move does the trick, and it is a surprising choice. Can you find it? The solution is below.

Sir Patrick Moore’s autobiography is a lively read. Another hobby he mentions (“a mild hobby of mine”) is wine-making, and his penchant - or perhaps weakness! - for gin and tonic is affectionately remembered by friends and house guests. As a final anecdote, Moore has a confession: to one of his lectures not a single person came. The day was right, the month was right, as was the venue. However, it was the wrong year! The abashed astronomer had shown up precisely 365 days too early. 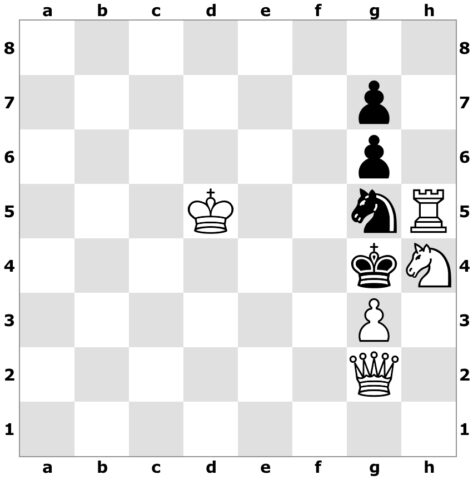 Solution: White plays Nh4-f5! (knight to f5). Black has many options but all are met by checkmate. Try to find the different responses!