Youngsters associated with the far-right party Vox sought to disrupt a speech by Chief Minister Fabian Picardo in Madrid on Tuesday, using a remotely activated Bluetooth speaker to blast ‘Gibraltar Español’ briefly during the event.

The propaganda stunt was short-lived and served to sharply underscore Mr Picardo’s message of dialogue and respect ahead of UK/EU talks for a “dynamic” post-Brexit future for Gibraltar and the neighbouring Campo de Gibraltar.

Addressing the prestigious Club Siglo XXI, Mr Picardo spoke of a common desire for “mutual progress and prosperity” to break from the “nostalgia of the past”.

But as if on cue, Vox teenagers dragged that nostalgia into the room with a childish prank that nonetheless raised serious security concerns too.

Mr Picardo told guests that Gibraltar, the UK and Spain had been able to engage in close dialogue and cooperation to try and find opportunity in the challenges of Brexit, even while respecting each side’s long-established red lines on the issue of sovereignty.

“No one seeks, or should seek, regression or conflict,” he said.

“That is why Gibraltar has always been a strong advocate of dialogue, because dialogue does not humiliate those who engage in it.”

“You are not kow-towing or losing your dignity when you try to settle disputes with reason and not with headlines.”

“Dialogue is essential for coexistence, [and] living together as we do with Spain, coexistence must be based on mutual respect.”

The governments of Gibraltar, the UK and Spain have repeatedly and publicly highlighted their commitment to build on the consensus reached in the New Year political framework agreement, and to support negotiations to turn it into a binding UK/EU treaty for the Rock’s future relations with the bloc.

But the Vox antics, coupled to some hostile questioning from some of those present in briefing, highlighted the deep-rooted preconceptions that still exist about Gibraltar within sections of Spanish society. 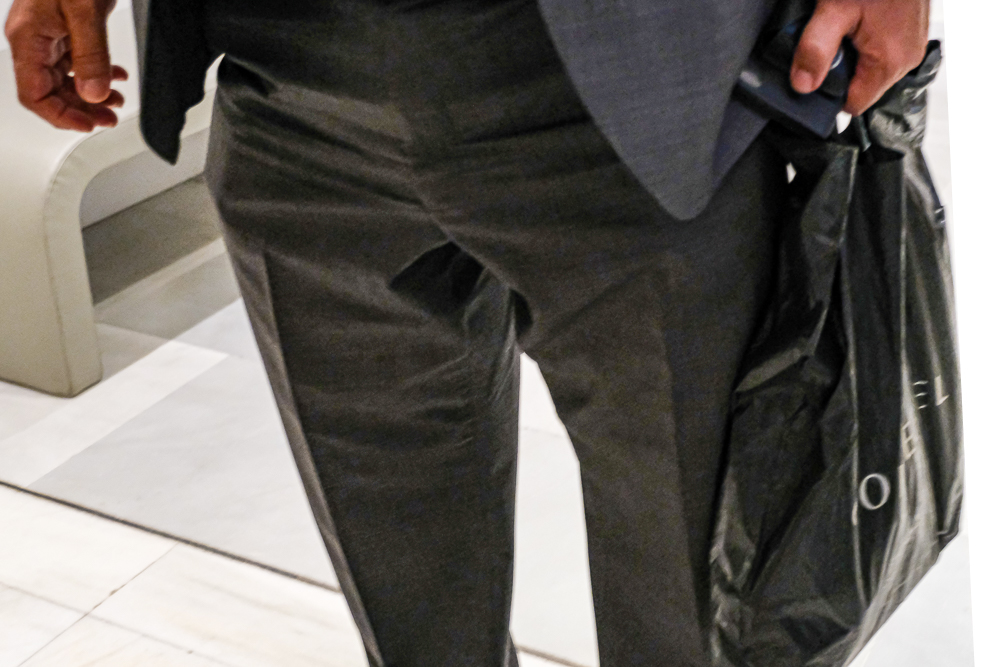 Shortly after Mr Picardo began addressing guests at the 9am session of the prestigious Club Siglo XXI in the NH Collection Eurobuilding hotel, a loudspeaker began blaring out the Spanish anthem alongside chants of ‘Gibraltar Español’.

The sound was swiftly traced to a speaker that had been placed in a cloth shopping bag under the stage on which Mr Picardo and other guests, including the UK’s Ambassador to Spain, Hugh Elliott, were sitting.

The chants and music lasted less than a minute and appear to have been activated remotely by someone in the audience, while another person videoed it using a smartphone.

The youth wing of Vox later claimed responsibility for the stunt on Twitter, describing the Chief Minister as “a pirate” and posting footage of the incident.

As always when travelling in Spain, the Chief Minister was accompanied by a security detail of RGP close protection officers who work closely with those hosting the event.

“We are concerned that an automatic device could be placed so close to the Chief Minister and his entourage,” a spokesman for the Royal Gibraltar Police told the Chronicle.

“The security of the Chief Minister and his entourage outside Gibraltar is risk assessed based on the information available to officers at the time. “

“Plans are put in place based on that risk assessment.”

“There is also an expectation that those hosting the Chief Minister will have their own security procedures in place.”

“This incident highlights the importance of information-sharing amongst all relevant stakeholders whenever the Chief Minister is travelling outside Gibraltar.”

The RGP had sent additional resources to Madrid with the Chief Minister on this occasion and had been monitoring those involved, who were identified even before the incident unfolded and later challenged.

But “…the technological nature of it - a music file played over a Bluetooth speaker - meant it could not be prevented,” the RGP spokesman added.

“Enhanced security has nonetheless been in place for the whole of the Chief Minister's visit to Madrid.” 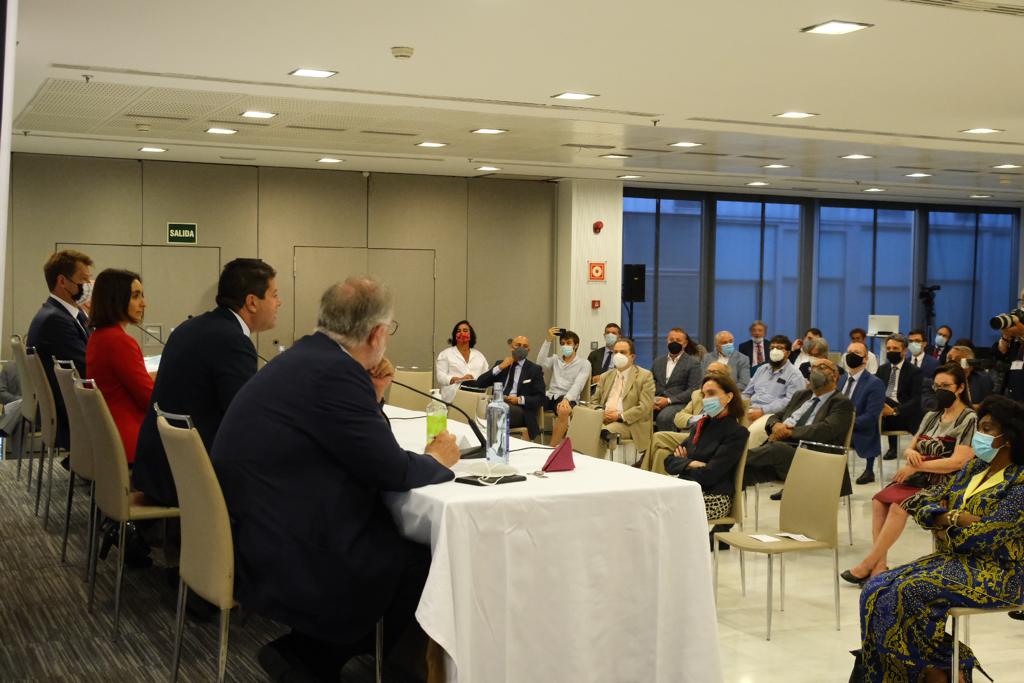 During an hour-long speech followed by a question-and-answer session, Mr Picardo told an audience of politicians, business executives and journalists that cross-border relations had stagnated as a result of 300 years of “strong words, sieges and conflict”.

He reminded guests that Gibraltarians had voted overwhelmingly to remain in the EU but had accepted the result of the Brexit referendum because they desired to be British above all else.

But he said too that the rupture of Brexit had created an opportunity to “thaw” institutional relations between Gibraltar and Spain for the sake of citizens in Gibraltar and the Campo, where communities were closely linked.

He dismissed the standard Spanish bugbear that Gibraltar was a tax haven that leeched on the Campo, explaining instead the Rock’s economic contribution to the region and the shared aim to build on that in the years ahead.

“We Gibraltarians do not wear pirate patches,” he said.

“We are not the caricature that is painted of the Llanito in the most rancid and defamatory media.”

“The truth is that, like everyone else, we Gibraltarians are good and not so good. Some to everyone’s taste and some to no one’s taste.”

The Chief Minister said that after the Brexit vote, and despite hardline voices on the right of Spain’s political spectrum, the three governments had been able to set aside the issue of sovereignty in order to sit down and talk.

To underscore the UK and Gibraltar’s red lines on sovereignty, Mr Picardo quoted Spain’s former State Secretary for Europe, Marco Aguiriano, who once told the Foreign Affairs Commission in the Spanish Congress: “If we table sovereignty issues, the British and the Gibraltarians will close their files and leave.”

“My friend Marco did not make any mistake in his analysis.”

But the Chief Minister acknowledged too that the UK and Gibraltar position on sovereignty had a Spanish flip side.

“Well, we all have teeth and nails,” Mr Picardo said.

In government, the PSOE’s position on sovereignty was exactly the same as the Partido Popular’s, the Chief Minister said.

Even so, he told guests that several Spanish Foreign Ministers, from the PP’s Alfonso Dastis, through the PSOE’s Josep Borrell and the current incumbent in the post, Mrs Gonzalez Laya, had realised that something that was bad for the Gibraltarians would also be damaging for the Campo de Gibraltar.

All three ministers – and Fernando Moran and Miguel Angel Moratinos before them - had met and spoken with Gibraltar’s Chief Ministers, most recently Mrs Gonzalez Laya, who discussed Brexit with Mr Picardo during a visit to the Campo de Gibraltar last year, and despite the difficulties of Covid-19.

“It was a meeting that elicited a lot of negative and unwelcome comment from those who never seem to want us to see each other face to face,” he said.

And he added: “That’s why, every time there’s a meeting between a Spanish Foreign Affairs Minister and a Chief Minister of Gibraltar, [detractors] try to ensure the commentary is so negative that it serves as a notice to mariners to avoid any future contact.”

“Well, to me, Moran, Moratinos, Dastis, Borrell and Laya appear even braver, because each has met with Chief Ministers of Gibraltar and, I think it’s true to say, none has regretted it.” 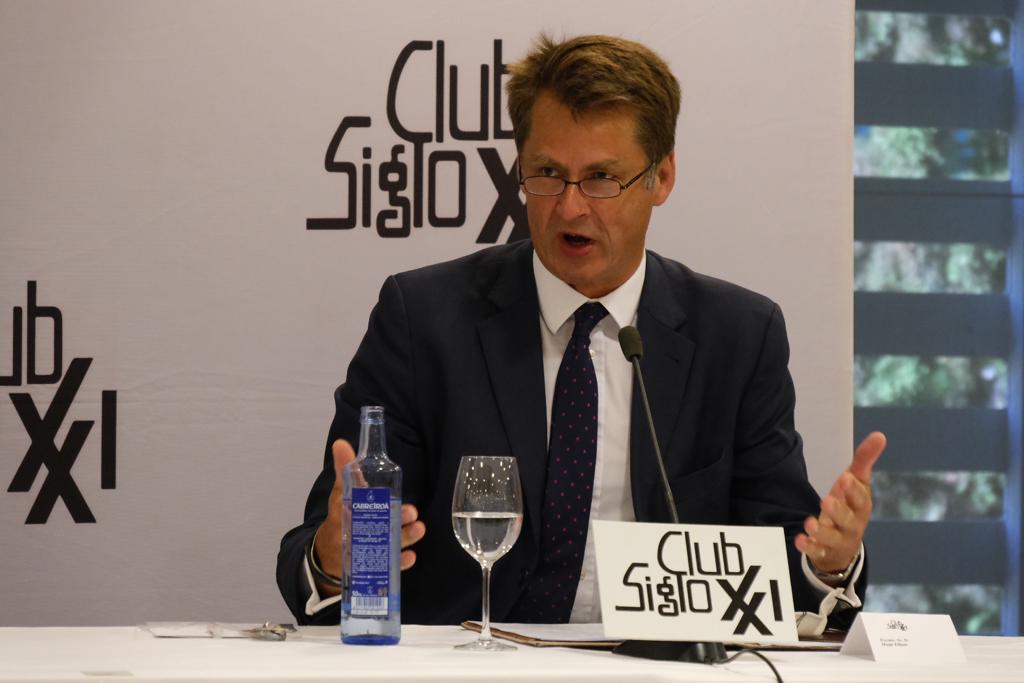 Mr Picardo focused the last part of his speech on young people, perhaps fittingly given that the Vox Youth had sought to mar his intervention.

He said three governments that saw themselves as modern could not condition their world view on the “battles, events and treaties” of the past 300 years.

He echoed statements by Juan Lozano, the PSOE president of the Mancomunidad de Municipios in the Campo de Gibraltar, who had called on Madrid to focus investment on the Campo.

“There is still time for these investments to be designed to complement the investments projected by the Treaty we are proposing between the United Kingdom and the Union,” he said.

The Chief Minister expressed his hope that the European Commission would soon finalise its negotiating mandate to allow for the start of talks on the UK/EU treaty on Gibraltar, repeating his belief that “there is a great opportunity here” to tap into the region’s geographic importance and the skills of its people on both sides of the border.

And he acknowledged too the words of Spanish Prime Minister Pedro Sanchez, who earlier this year told the London School of Economics that he wanted to make Gibraltar “a showcase for cooperation”.

“The combination of the human and natural resources of the area and the entrepreneurial spirit of the Llanitos and Campogibraltareños present us with the potential for future growth, more wealth and that ‘shared prosperity’ of which we have spoken so much,” he said.

Mr Picardo had been introduced by the UK Ambassador, who poured fulsome praise on the Chief Minister and sketched out too the UK’s position on Gibraltar and the months ahead.

Mr Elliott paid tribute to Mrs Gonzalez Laya and her “tenacious” negotiators, and said the talks represented an opportunity to move form a situation where “everyone loses” to one where “where everyone can win”.

The goal was to create “confidence, certainty and enduring stability” for communities on both sides of the border, without prejudice to each government’s respective position on sovereignty, jurisdiction and control.

And at the end of the session, Mr Elliott, with more than a hint of irony in his voice, thanked the Vox youngsters for the music they had “kindly” played at the start of the talk.