As Queen takes to balcony in London Jubilee celebrations, a 42-gun salute is fired in Gibraltar

By Chronicle staff and PA

Soldiers from the Royal Gibraltar Regiment fired a 42-gun salute to mark the Queen’s Platinum Jubilee.

The salvoes coincided with the Queen’s first appearance on the palace balcony in London, where she took a salute of her soldiers returning from Trooping the Colour.

As the Guardsmen and officers passed by the head of state, the monarch watched them parade as thousands lined The Mall after witnessing the pomp and pageantry of the ceremony attended by the royal family. 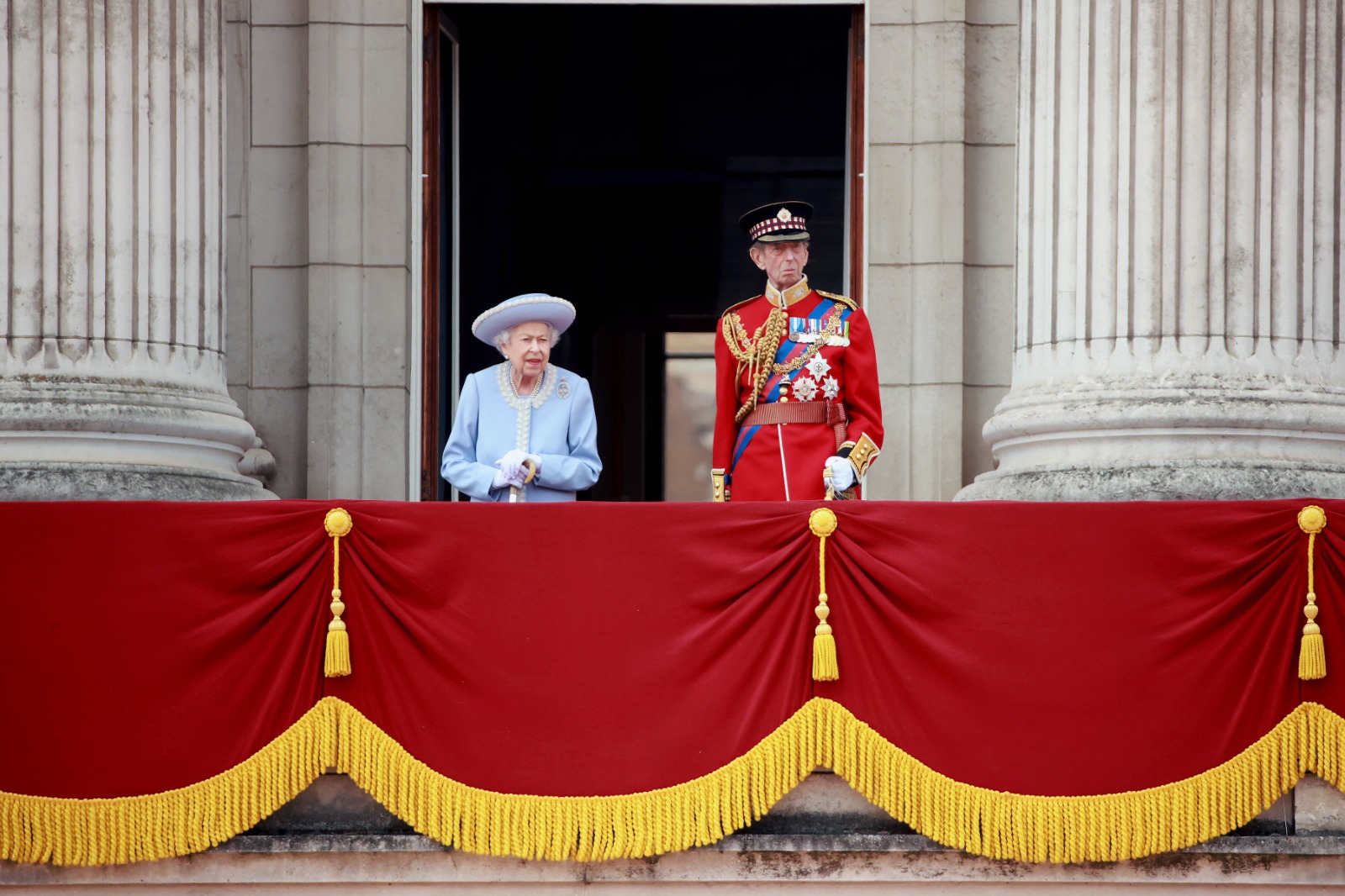 At the same time in Grand Battery in Gibraltar, a 42 Royal Gun Salute was fired by the Thomson’s Battery, Headquarter Company of the Royal Gibraltar Regiment to celebrate the anniversary of the Queen’s Coronation.

Present at the salute was Major John Pitto, who just yesterday was made a Member of the British Empire [MBE] in the Queen’s Jubilee Honours list for services to Headquarters British Forces Gibraltar, and the inspecting officer was the Commander British Forces, Commodore Steve Dainton. 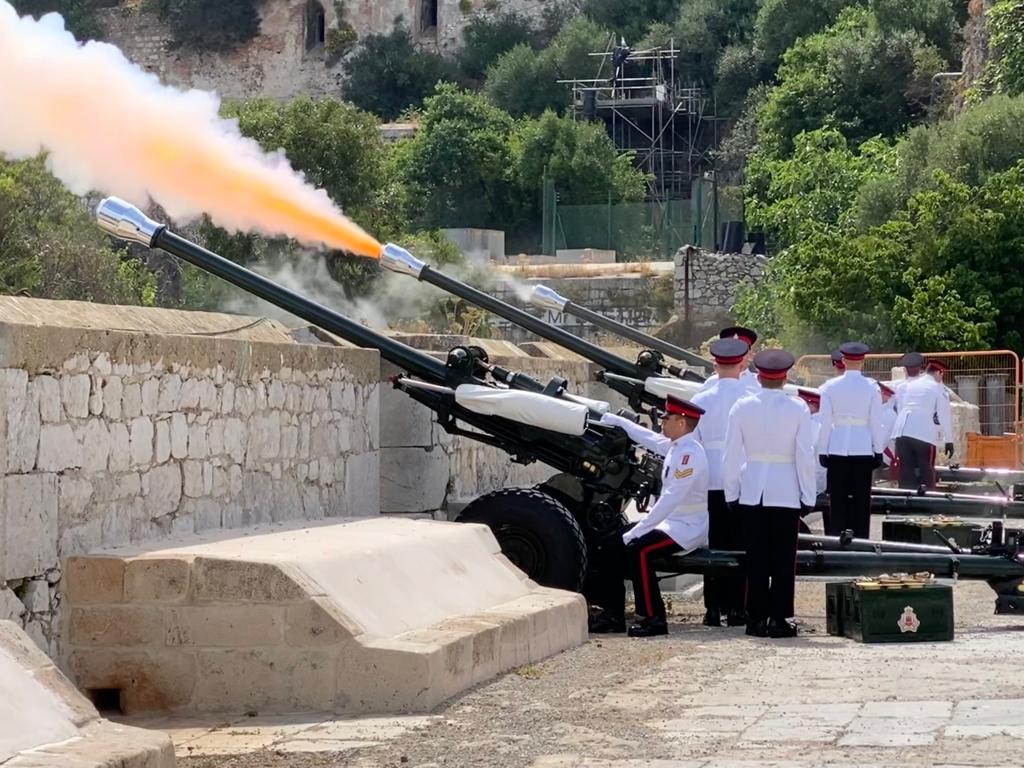 On completion of the inspection Major Pitto escorted Cdre Dainton to a central position to the rear of the troops where he viewed the salute.

Members of the public gathered to watch the salute as officers stood to attention. 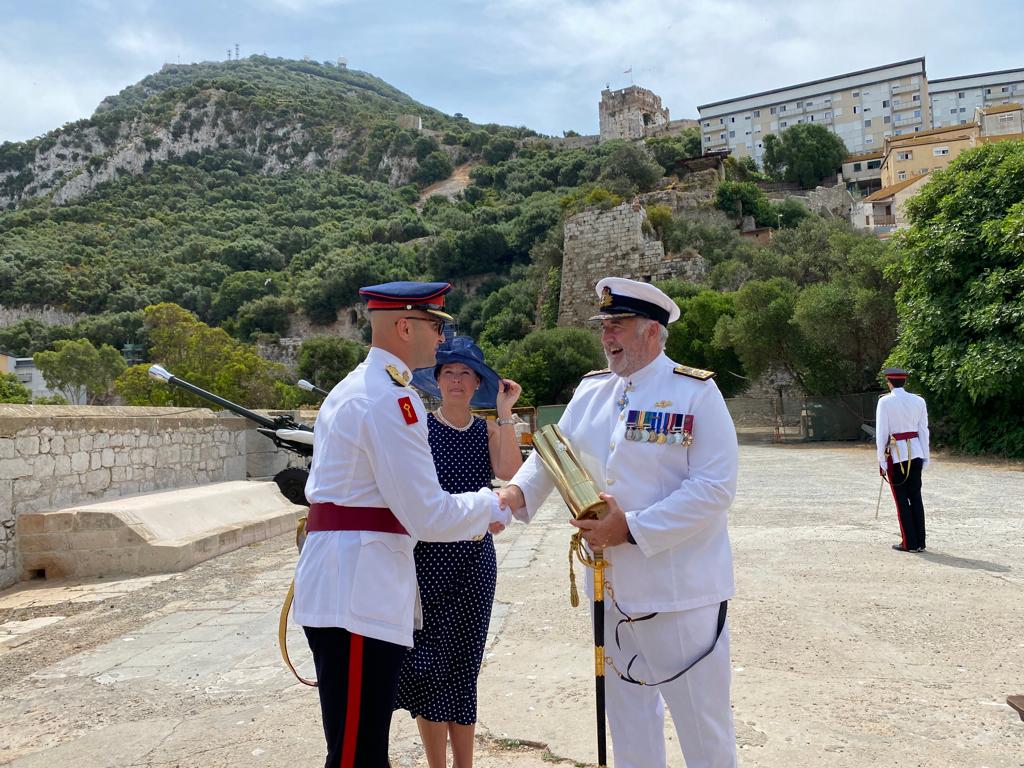 On completion of the salute, Cdre Dainton signed the Inspecting Officers’ book and was accompanied into Grand Battery House by Major Pitto. 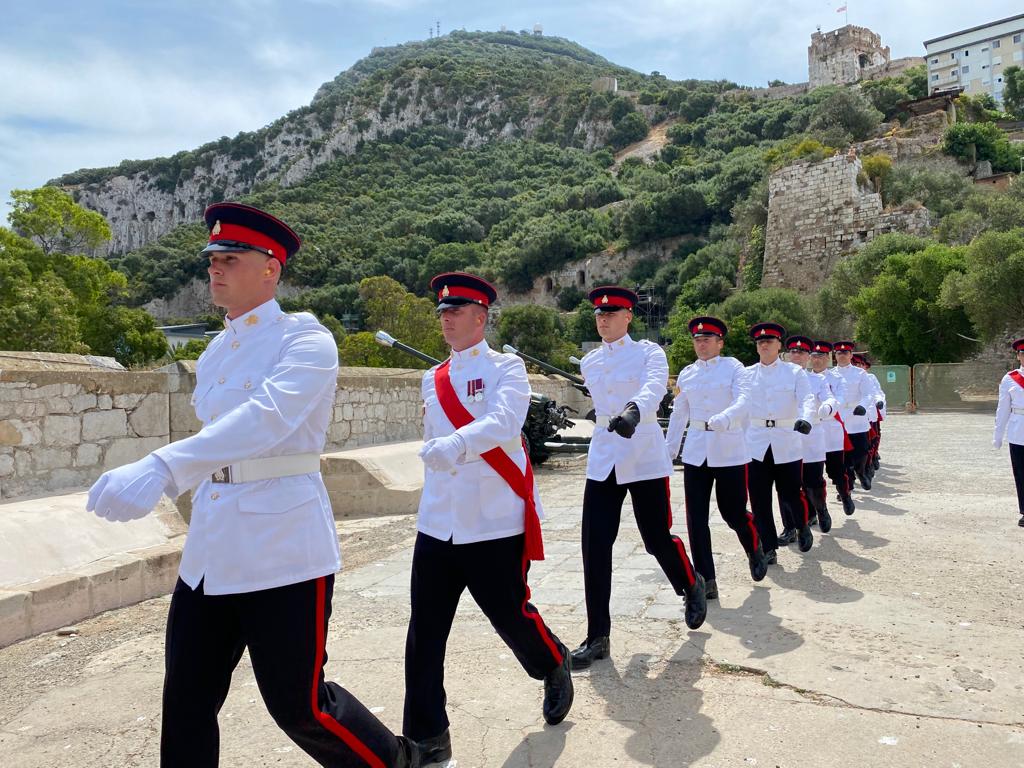 Back in London, the Jubilee Queen, head of the Armed Forces, carefully inspected the military from up high as she stood with her cousin, the Duke of Kent – Colonel of the Scots Guards.

Dressed in a dusky dove blue Angela Kelly coat which she wore for her official portrait, and matching hat, the 96-year-old Queen was holding a walking stick and wearing the Guards’ Badge on her coat.

The Duke and Duchess of Sussex were among the guests who watched Trooping the Colour at Horse Guards, although they have yet to be publicly pictured.

They joined a host of royals including the Duchess of Cambridge and Duchess of Cornwall in the Duke of Wellington’s former office the parade ground.

It is believed to be the first time Kate and Meghan have met in person since the Sussexes left in 2020 for a new life in America.

The crowds were earlier treated to the sight of Prince George, Princess Charlotte and Prince Louis with proud parent Kate and their step-grandmother Camilla in a carriage procession. 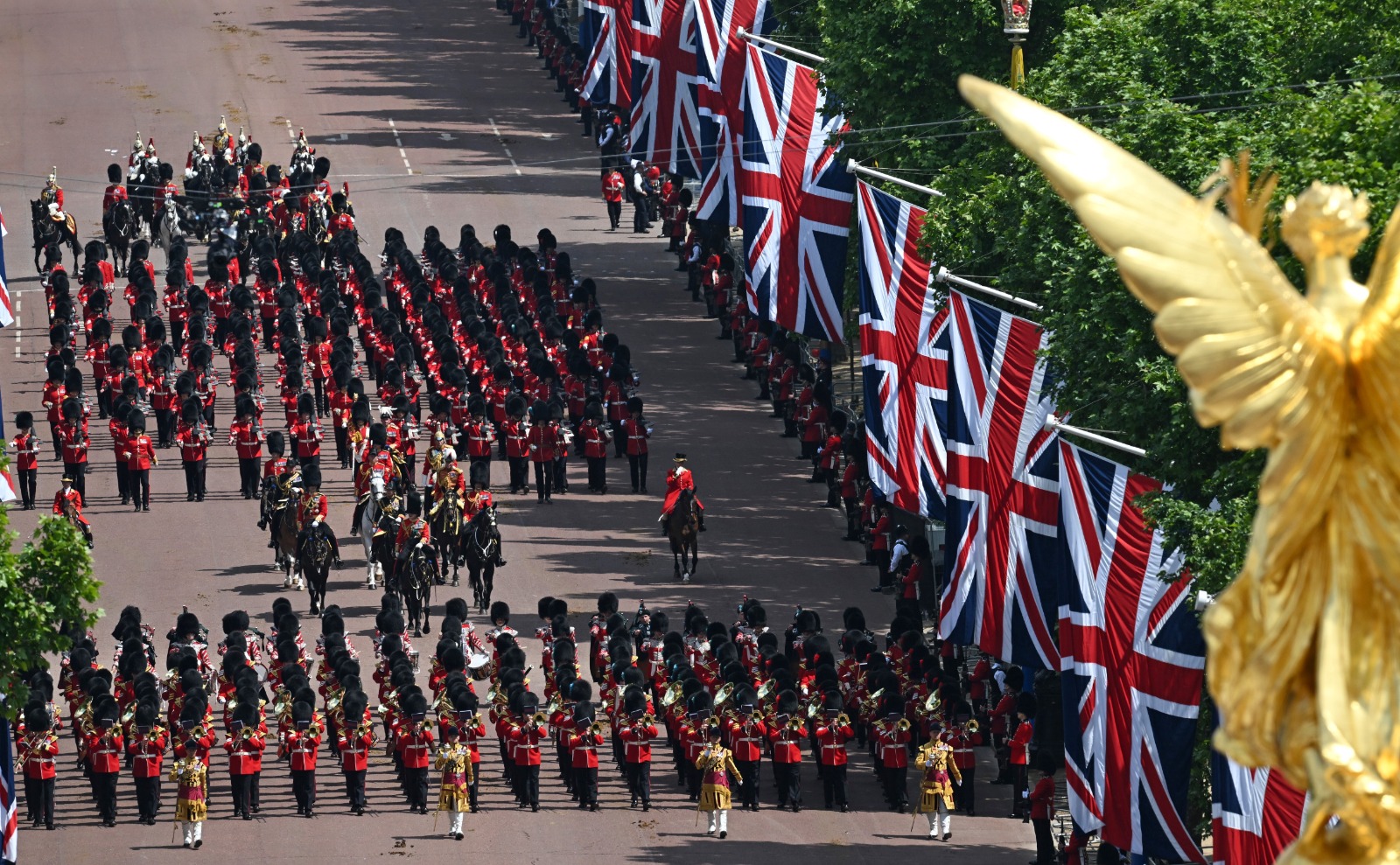 As the spectators waved at the young royals the trio waved back in their first major public outing for a Jubilee.

The monarch, who has mobility issues, deputised her usual role to future king, the Prince of Wales, who inspected the Guardsmen in their scarlet tunics and bearskins and acknowledging their salute. 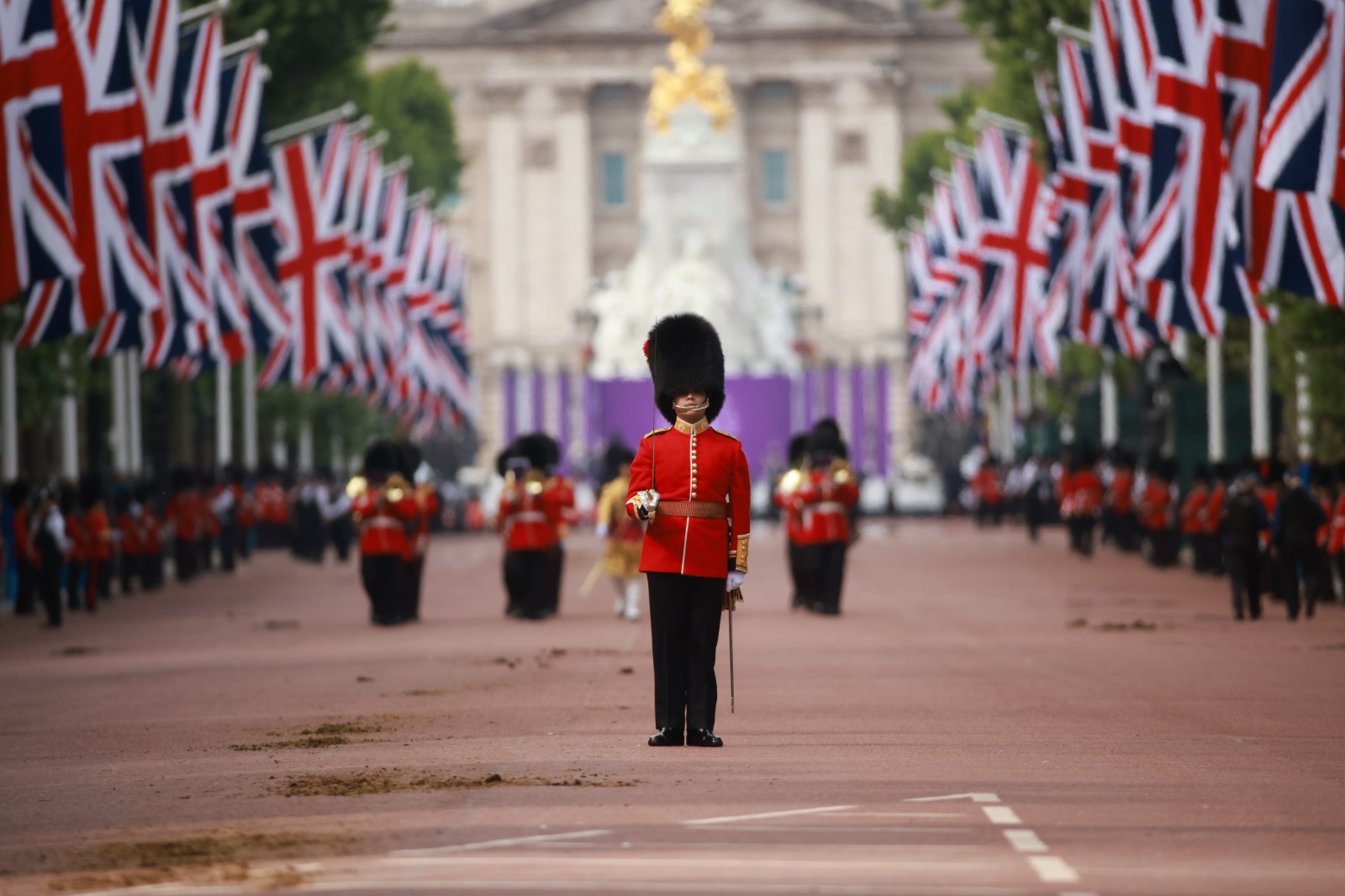 But she passed a watchful eye over the servicemen, with the Duke of Kent by her side, after their return from their display of procession marching.

The nation is embracing the special extended bank holiday weekend of pomp, pageantry and star-studded festivities, which will see celebrities and the public gather in their millions in tribute to the monarch.

Among the police officers guarding the event was the RGP's PC Rik Guarnieri, was on duty at the Trooping the Colour ceremony where the salute was taken by Prince Charles.

He was there at the invitation of the Metropolitan Police.

"This was a truly memorable occasion. I felt very proud to represent the RGP on such an historic day," said PC Guarnieri. 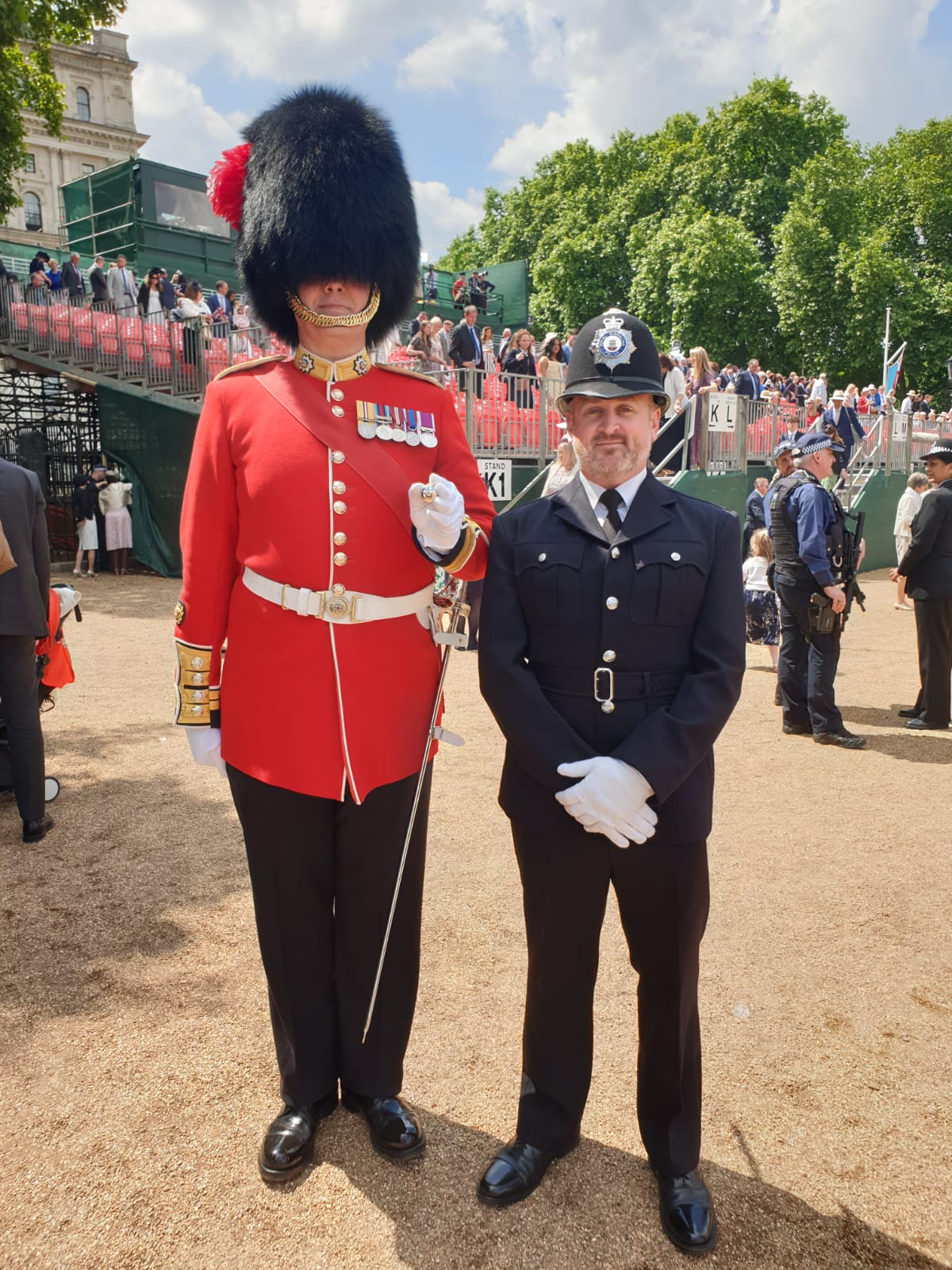