As Russia invades Ukraine, a phone rings in Gibraltar

Two Polish nationals stand outside No.6 Convent Place on Thursday to protest Russia’s actions in Ukraine. Photo by Eyleen Gomez

By Gabriella Peralta and Eyleen Gomez

At 5am on Thursday, Larisa Meleshenko’s phone rang in Gibraltar. It was her 80-year-old mother in Ukraine calling to tell her Russia had invaded.

Mrs Meleshenko told her mother not to panic, but from Gibraltar she fears for her family and friends.

Her mother lives in Irshansk, a small town in Ukraine west of Kyiv and a couple of hours' drive from the border with Belarus.

On Thursday, as Russia closed in on Ukraine, Mrs Meleshenko’s mother prepared to hunker down in a basement or garage.

Mrs Meleshenko told the Chronicle her mother has received documents instructing her on what to do if Russian troops enter her town, with the advice being to hide.

She is also concerned for her cousin and many of her friends.

“They are worried about the situation,” Mrs Meleshenko said.

One of her friends has tried to flee the country but has been unable to do so as the roads have been blocked by police vehicles.

In Ukraine, she added, her family and friends have heard the airstrikes.

Mrs Meleshenko lived all her life in Ukraine and after meeting a local man, she moved to Gibraltar in 2019 and the pair were married.

She urged Russians not to believe in war or the politics of conflict.

“I want to tell people in Russia to do something,” she said.

“These politics are lies.” 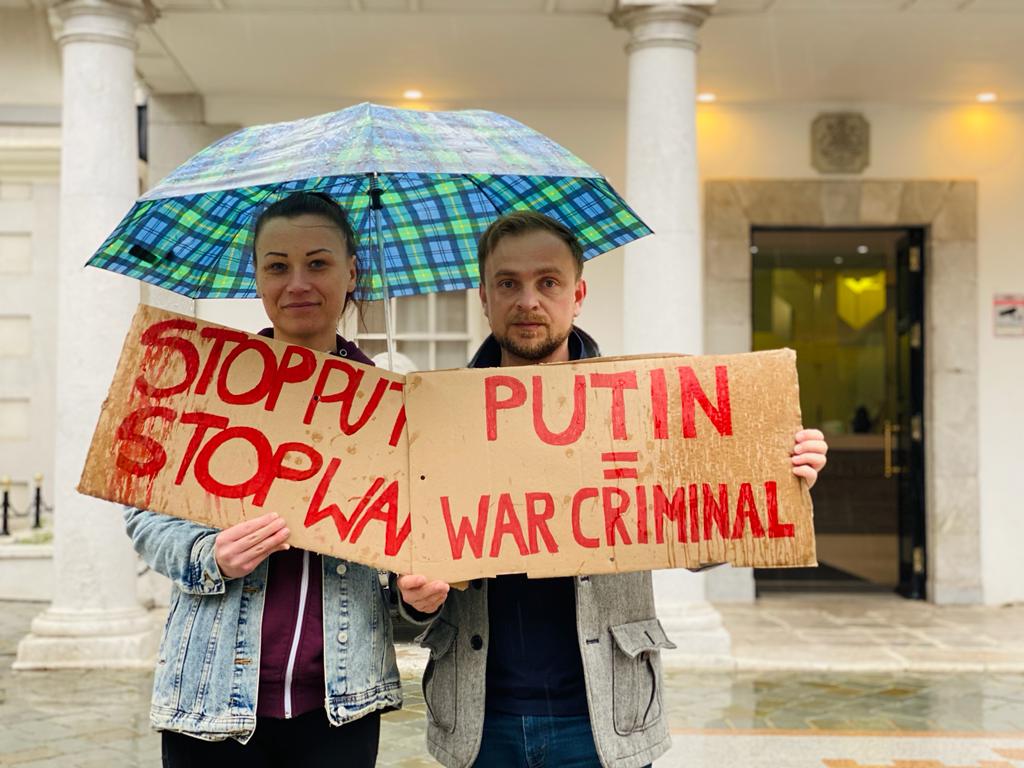 And as the world denounced Russia’s aggression, with protests rapidly organised in many European countries, Gibraltar was no different.

On Thursday afternoon, Polish nationals Michael Żelazo and Maja Wisnewski stood in the rain outside No.6 Convent Place to raise awareness of the ongoing crisis in Ukraine.

“We are here because [Russian President Vladimir] Putin decided to invade Ukraine, which is basically a war crime,” Mr Żelazo said.

“And we think that Putin is a bully and you should stand up to a bully and this is what we can do at the moment.”

By standing outside the Government building in Gibraltar, the two Poles hoped to highlight the plight of Ukraine and the concerns of neighbouring countries including Poland.

“Because the more people that know, the more likely they are to support the victim, which is the Ukraine,” said Mr Żelazo.

He added that even Gibraltar can make a difference despite its size because “everybody counts and we have to be united.”

Mr Żelazo has friends in Ukraine. They were safe on Thursday, bu he feared for them given the fast-moving situation on the ground.

Mr Żelazo wlll also be outside No.6 Convent Place after 5pm on Friday.