Blood, sweat and the promise of cold beers formed part of Royal Marine Ian ‘Bish’ Bishop’s afternoon on Thursday when he ran across the runway, marking the end of the double amputee’s epic ultra-marathon run from Malaga to the Rock.

“I can’t wait to get these legs off, put on my normal walking legs and go get a couple of beers,” he told the Chronicle as he crossed over the border from Spain. 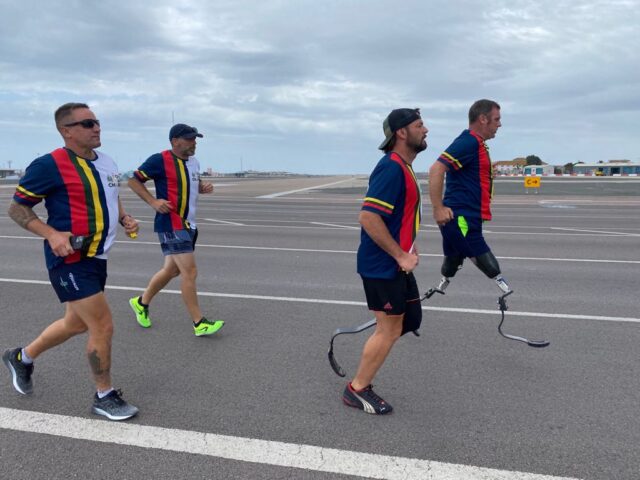 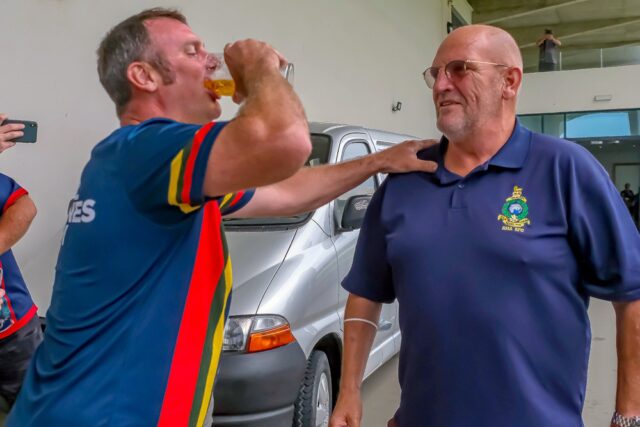 Flanked by three other Royal Marines, he undertook the four-day challenge to raise funds for the Royal Marines Charity and On Course Foundation, to date he has amassed nearly £11,000.

Mr Bishop was serving in Afghanistan in 2009 with 45 Commando Royal Marines when he was injured by an IED and lost both his legs. The support both charities gave him since then inspired him to do something to give back.

“I am relieved it is over. It has been an absolute epic. I have had the other three guys with me including Vicey (Paul Vice MC) who is a below-the-knee amputee and he has been in the same boat as us but it has been great because we are raising money for two great charities,” said Mr Bishop.

“It’s great that I can still do something physical and get out there and do 75km.”

“There have been a couple of times, especially yesterday, when I didn’t think I could do it because my legs were hurting that much.”

“The stumps were bleeding, the prosthetics were rubbing that much I had blisters and the heat when we were up Malaga was absolutely horrendous.”

He said that without the team supporting him - Paul Vice MC, Bob Toomey and Jock Macrae, never letting him quit and giving him all the encouragement and motivation to keep going - he would not have made it.

“I am glad I have done it but there has been many points over the past few days where it was just like ‘what are we doing’, but I have had three really great blokes with me that really helped me out and pushed me on,” he said.

“There has been good fun and games, they haven’t taken pity on me and they pushed me the whole way and we got there.”

That was not the only support he received.

Meeting him at the frontier was fellow Royal Marine and no stranger to challenge Lee Spencer, his wife Claire, and Barry Gray former Mountain Leader and RSM to the Royal Marines who walked solo to the South Pole in 2018/2019 as Mr Spencer rowed solo across the Atlantic. 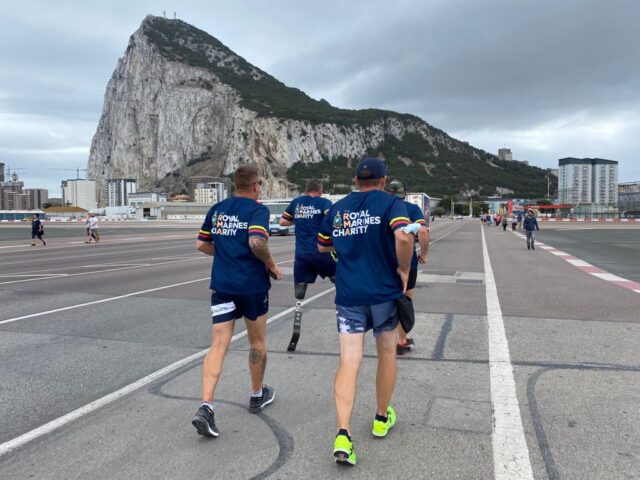 Mr Bishop and the three men also received support from Air Traffic Control when a message, “Well done Ian, nearly there,” boomed from the ‘Voice of God’ as they made their way across the runway.

The boost was exactly what the men needed as they reacted with a delighted holler and a fist in the air.

Mr Bishop lives near Mijas and with the Royal Marines Association celebrating its 75th anniversary, he felt the walk to Gibraltar from Malaga was a good distance to aim for. 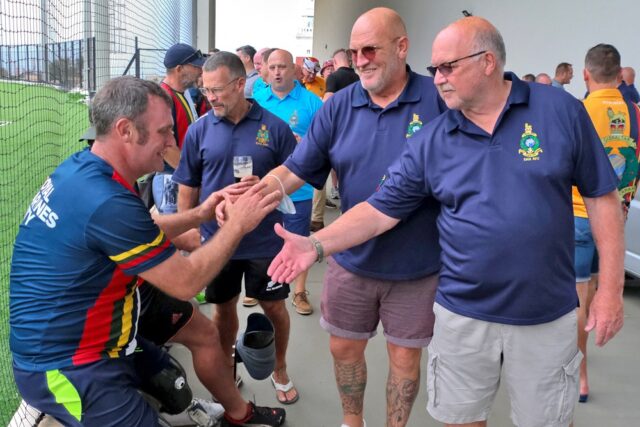 He opted for the dates as they coincided with the arrival of the Royal Marines Rugby Association on the Rock for their annual tour, where they will play the local Gibraltar side.

He was taken by car from the CEPSA petrol station by the runway to Europa Point to meet the team at the home of rugby on the Rock.

“We thought we would meet them down here, run 75km and try and raise some funds,” said Mr Bishop.

The journey has not been easy but given the fact that Mr Bishop is on prosthetic legs hills were avoided where possible.

As a result they ran down many boulevards and boardwalks.

“Unfortunately with prosthetic legs hills up and down don’t really work because gravity takes over and there is only one winner there,” he said.

Mr Toomey said the event was an emotional one for Mr Bishop.

“What he went through yesterday with his stumps with blood coming out of his sockets and all sorts of things. It got a bit tricky at one stage but through Commando spirit he just got through it,” he said.

The team left early to try and beat the sun every day and completed 25km on the first day, Sunday, alone after that they aimed for 15km a day and on Thursday the final 5km.

“He just cracked through it and he just kept on going and going,” said Mr Toomey.

“It took him over an hour to get his sockets on this morning because his legs were so swollen and blistered. And Vicey too was struggling as well,” he added.

To donate to Mr Bishop’s challenge go to https://uk.virginmoneygiving.com/IanBishop3/1