A commemorative 50p coin has been launched in honour of British chemist Rosalind Franklin, ahead of what would have been her 100th birthday.

The Royal Mint coin includes Franklin’s name along with Photograph 51, referencing the groundbreaking X-ray diffraction image of DNA she captured in 1952 with scientist Raymond Gosling at King’s College London.

The coin was designed by Royal Mint graphic designer David Knapton, who used the printing techniques of the era. 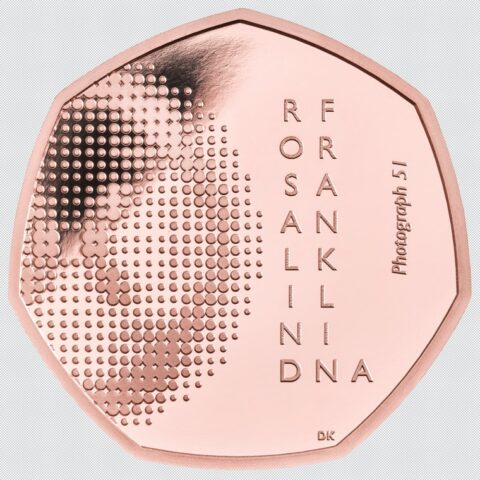 Mr Knapton said: “A straight replication of Photograph 51 wouldn’t have worked on a coin, so I decided to reflect the printing techniques of the era.

“Adding an A to a third column to line up with the last letters of Rosalind and Franklin to spell DNA felt like a small penny drop moment.”

Franklin played an instrumental role in the discovery of the double helix structure of DNA and in pioneering the use of X-ray diffraction.

Her brilliant career was cut short when she died of ovarian cancer aged 37.

The Royal Mint has also gifted Franklin’s sister, Jenifer Glynn, with a silver proof edition of the coin in celebration of what would have been Franklin’s 100th birthday on July 25.

It is the second coin in the Royal Mint’s innovation in science series, with the first dedicated to Stephen Hawking.

Clare Maclennan, divisional director of commemorative coin at the Royal Mint, said: “This commemorative 50p coin is truly a fitting tribute to a scientist who was instrumental in enabling one of the greatest discoveries of the 20th century.”

President and principal of King’s College London Professor Ed Byrne said: “I am delighted that today she has been formally recognised for her groundbreaking and wide-ranging work, which has allowed and inspired generations of students, scientists and physicists at King’s and beyond to delve deeper into biophysics, human heredity and to develop treatments for genetic diseases.”