Copenhagen brings ECL atmosphere to book their place to next stage

Copenhagen booked themselves a place in the next stage of the Europa Conference league after their 0-4 victory against Lincoln Red Imps at the Victoria Stadium. The match, the last Lincoln Red Imps played at the Victoria Stadium during the Europa Conference League group stage brought to the forefront many of the lessons learnt during Lincoln Red Imps impressive achievement of actually playing at this stage of the competition.
Five hundred Copenhagen fans brought to the stadium scenes which have not been seen in Gibraltar football before. Whilst Lincoln Red Imps players were by now used to such scenes having played in Copenhagen, Slovan Bratislava and Paok’s stadiums where the noise, the flares and the chanting have been constant, and at a larger scale. For Gibraltar fans, officials and stewards it was a new experience which they had thrust upon them during this Europa Conference League group stage. Thursday’s match seeing the biggest visiting number of fans and the first sight of flares.
Ninety minutes of chanting and singing, flares burning just as teams came out onto the field had officials on edge with football’s security tested this Thursday evening.
The match was to go without any real incident although questions were being asked as to how flares had been allowed onto the stands.
It was a deep contrast from one stand to the next. Directly opposite, the west stand filled slowly, with the one thousand seats sold to local fans never filling up in full. Many fans also arriving late with just a third of the west stands full as players lined out. Notably, the relative silence of Gibraltar fans during the ninety minutes once again contrasted with the chants from the east stands where very wet Danish fans beat on the drums and sang throughout. Once again, similar to the latest international matches, fans had remained silent as they watched.
Whilst the passion for football was not present on the stands Lincoln Red Imps once again put in a valiant display. Although not the display that they would have hoped for they were not to walk away in a whimper as some had predicted before they had kicked the first ball in the group stage.
Lincoln had started brightly attacking Copenhagen’s’ goal and silencing in the first minutes the vociferous Danish fans.
However, the latter did not have to wait long before their side went into the lead. Within seven minutes Copenhagen had put themselves ahead with goals from Johanensson and Legares.
The two early goals came as a massive blow to Lincoln Red Imps who were forced to tighten at the back and keep what was a young Copenhagen side from getting further ahead.
Although Lincoln Red Imps had a handful of chances to step forward Kike once again found himself out of his depth against the Danish defence, the Spanish forward once again unable to make his mark on home soil.
Whilst Lincoln Red Imps passion had seen them venture forward the differences in what was at stake once again played a major role. Copenhagen required a victory and hoped for a good result from the Slovan `Bratislava versus Paok to secure their place into the next stage, a multi-million pound reward awaited them from entering the next stage.
For Lincoln Red Imps the only reward was pride with just one match left in the competition away from home against Paok, and the knowledge that they were already out of the competition.
Whilst Lincoln held Copenhagen to a 2-0 for halftime dominating possession from the start of the second half Copenhagen extended their lead through Boving on the 63rd minute.
Caught in the break, although Coleing had been able to get his finger tips to a lobbed ball over him as he came out to block, it was not enough to stop the subsequent pass to the middle where Boving slotted past defenders with ease.
Just ten minutes later Hojlund finished off with a one touch shot on the run after a sweeping one touch passing moving across the right flank sliced through Lincoln’s defence.
For Copenhagen the victory placed them on 12 points, four ahead of their closest rivals and with just one match to play.
Whilst Lincoln Red Imps finished their home matches and now travel to Greece for their final match their display during the Europa Conference League group stage has set the tone for Gibraltar’s football to be seen with another perspective rather than the minnows image it has carried since entering UEFA.
Competitive on the field and making life difficult for opponents, whilst Lincoln Red Imps still have some way to go before reaching the quality of opposition they have faced at this stage, the signals that they could compete at this level were clearly seen.
Unfortunately, just like the weather where a down pour dampened the mood, Gibraltar’s hopes of celebrating a result in the group stage were washed away with the rain, for now. 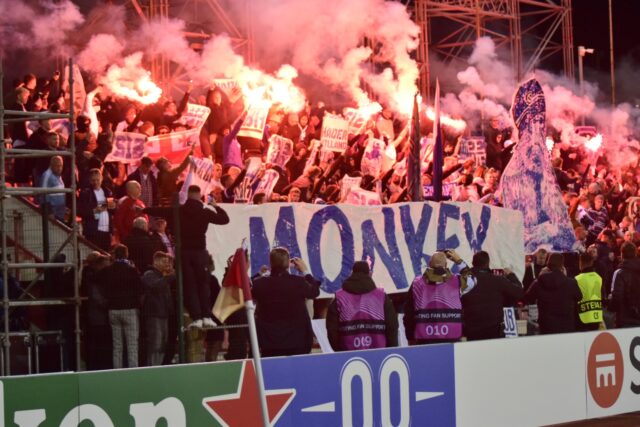 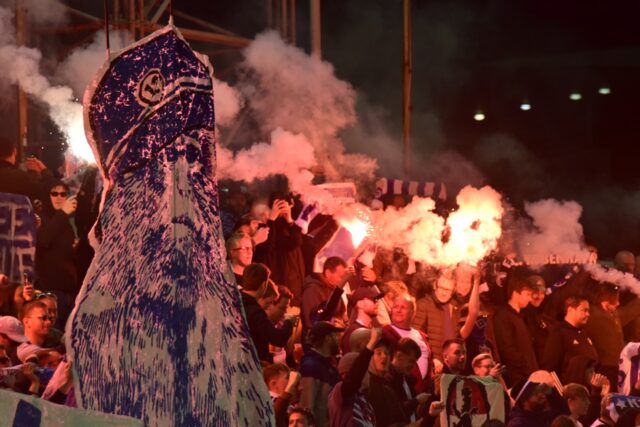 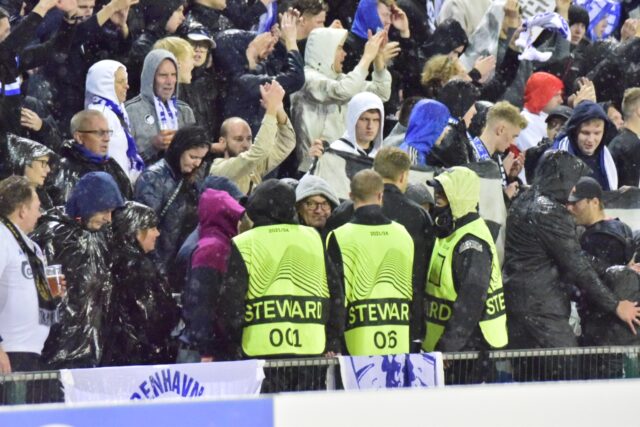 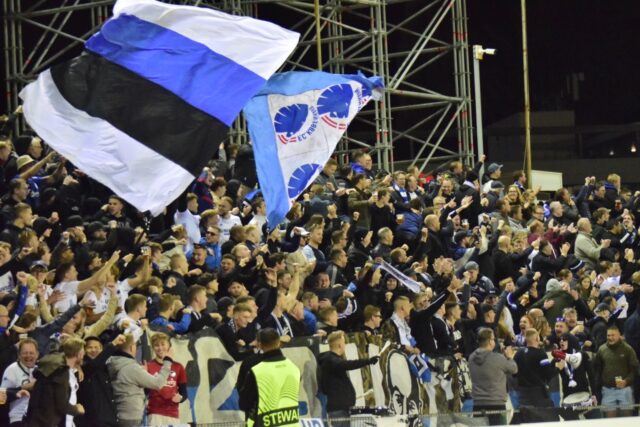 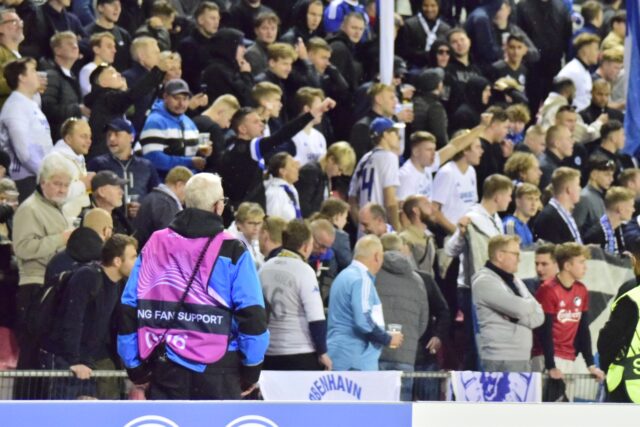 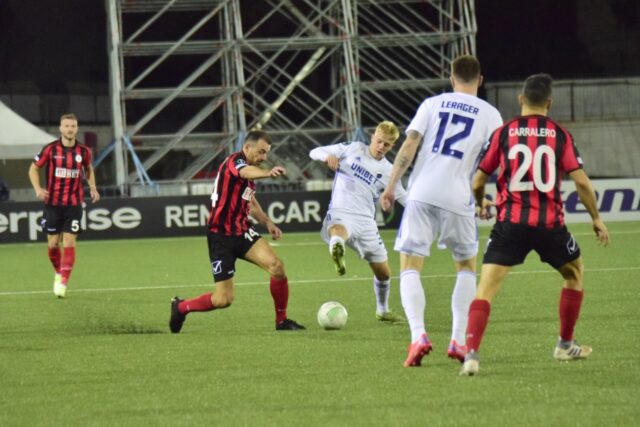 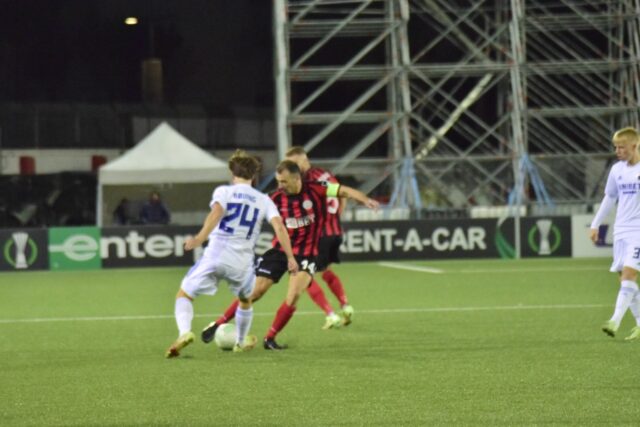 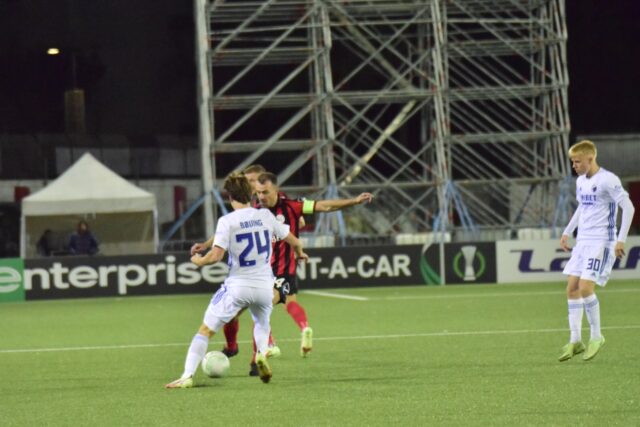 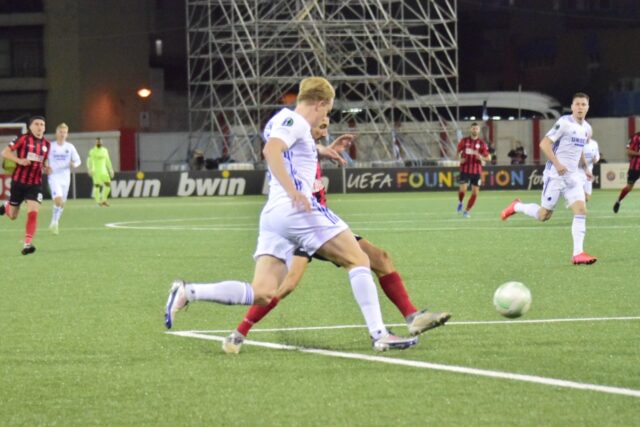 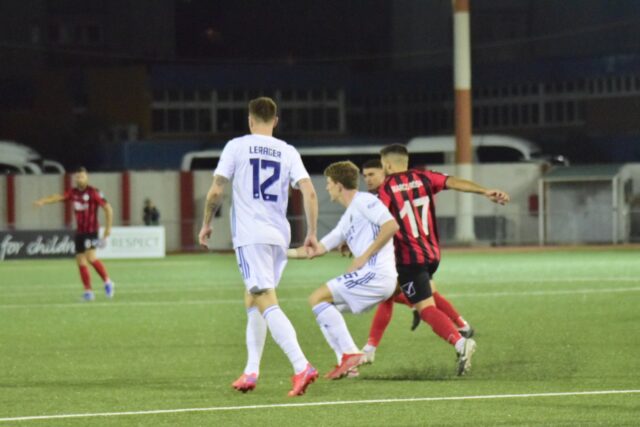 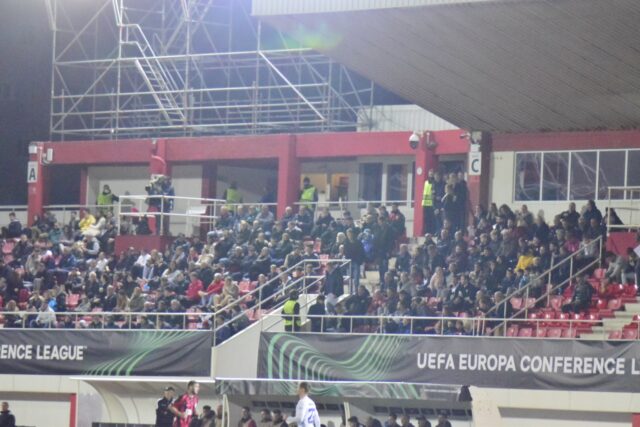 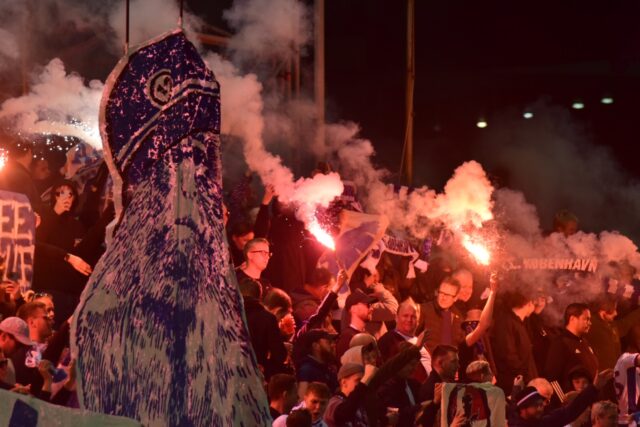 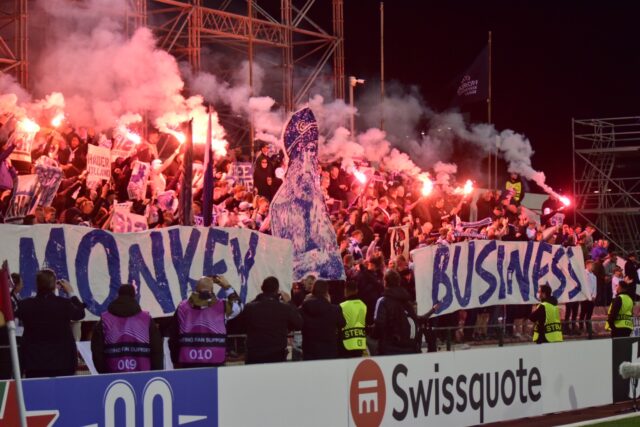 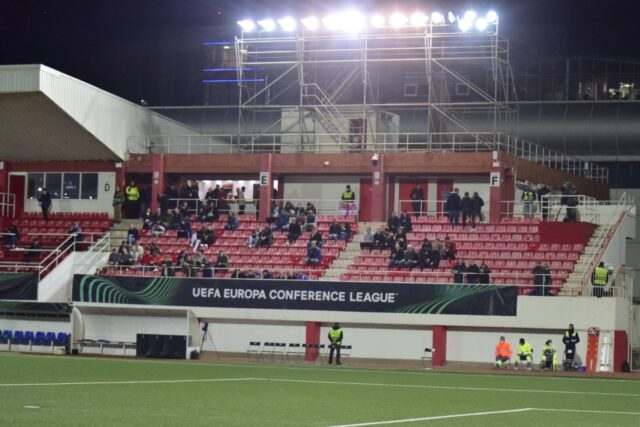 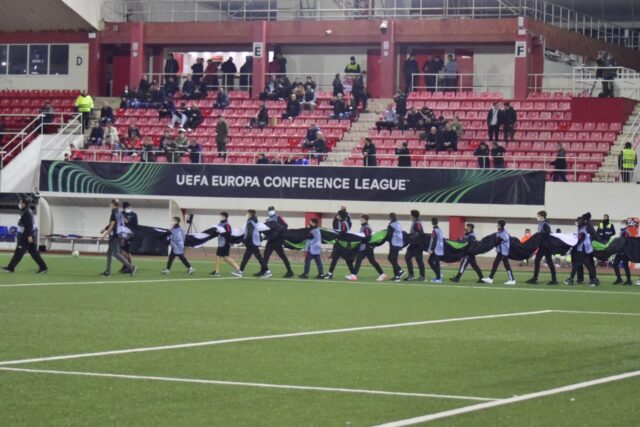 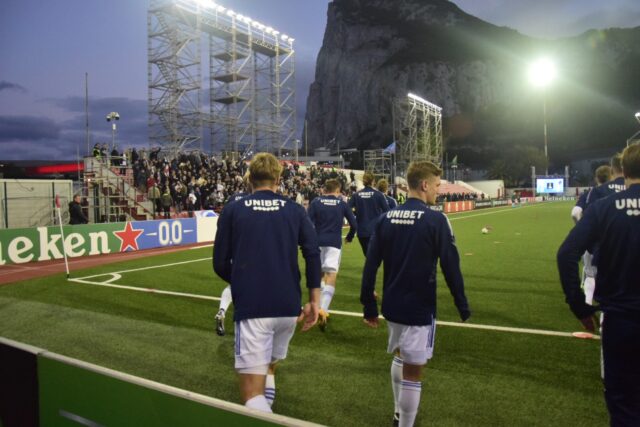 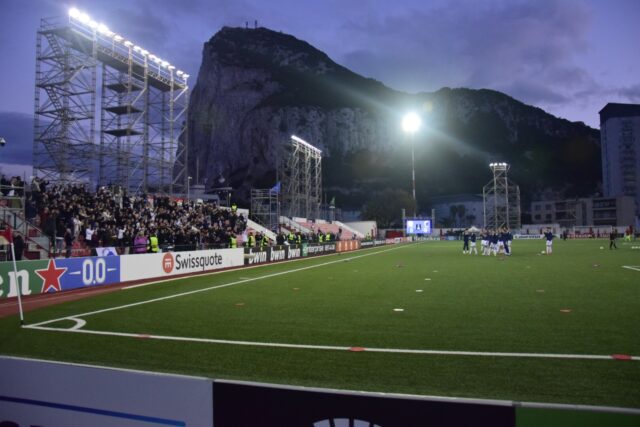 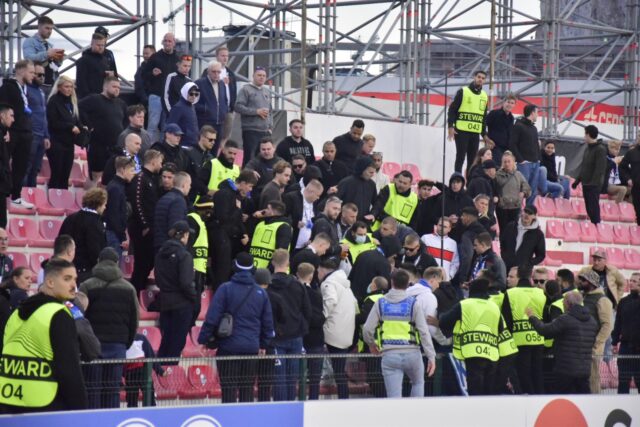 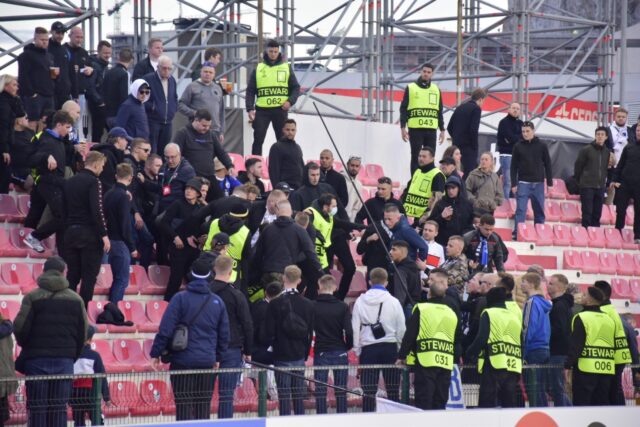 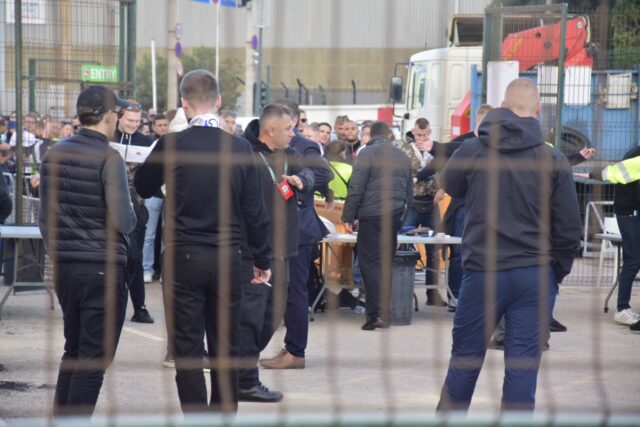 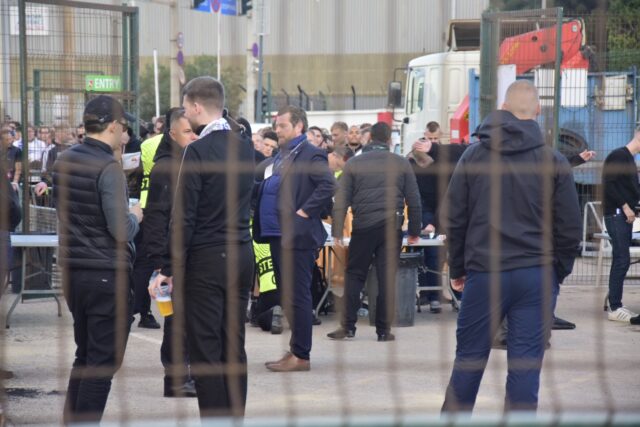 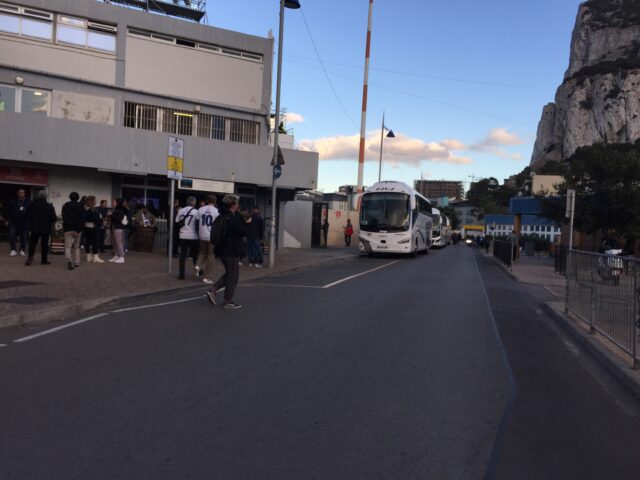