600kms, a couple of punctures and a burst tyre later, the five men who set off from Lisbon on Thursday morning pedalled into the Marina Bay on Sunday evening and were greeted by family and friends at the end of their gruelling challenge. 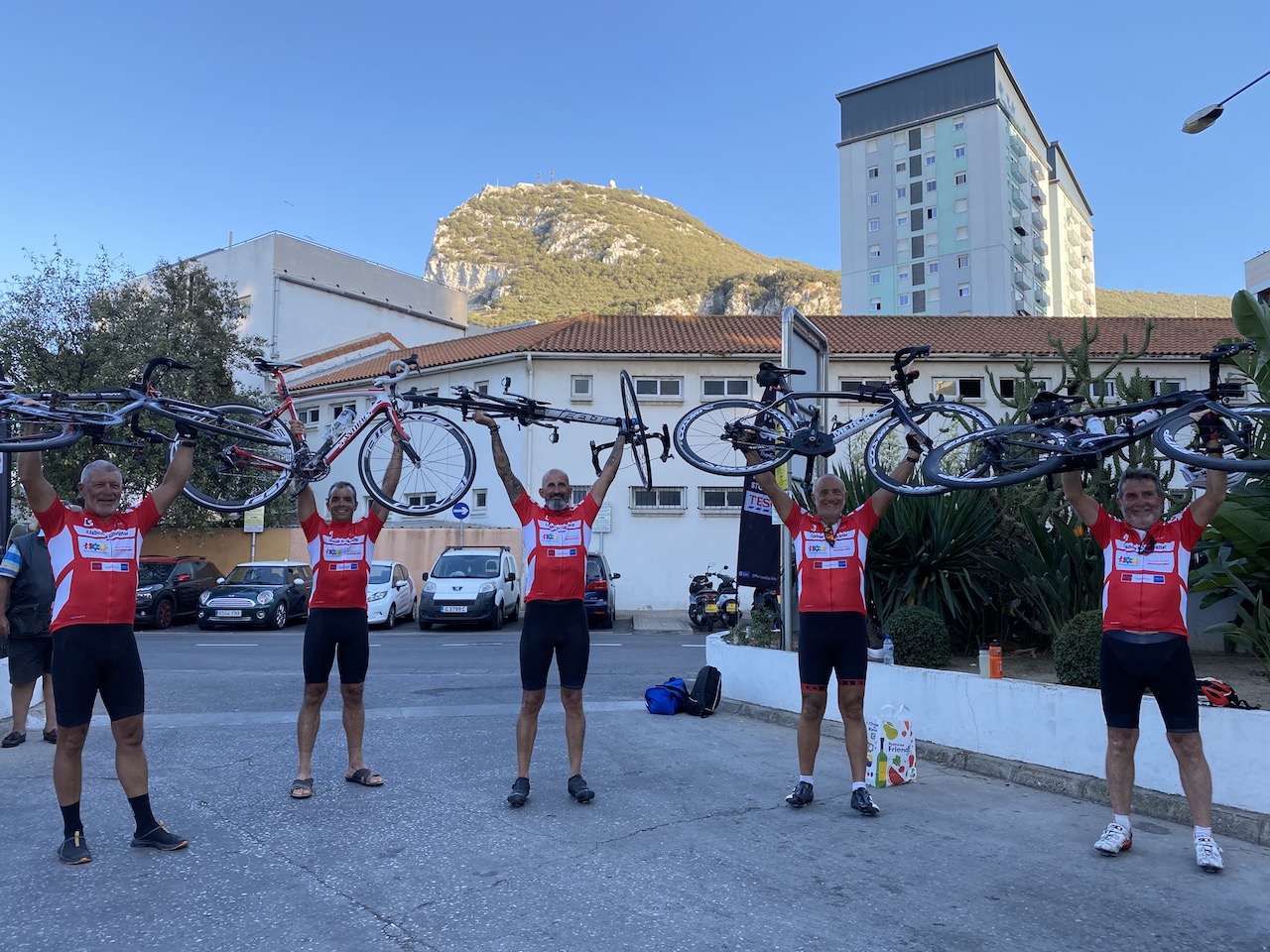 Relief was evident across all their faces and that of their families. Grandchildren went running to hug their grandparents, wives embraced their husbands and even Holly the dog was ecstatic to see her loved one Mr Vella. 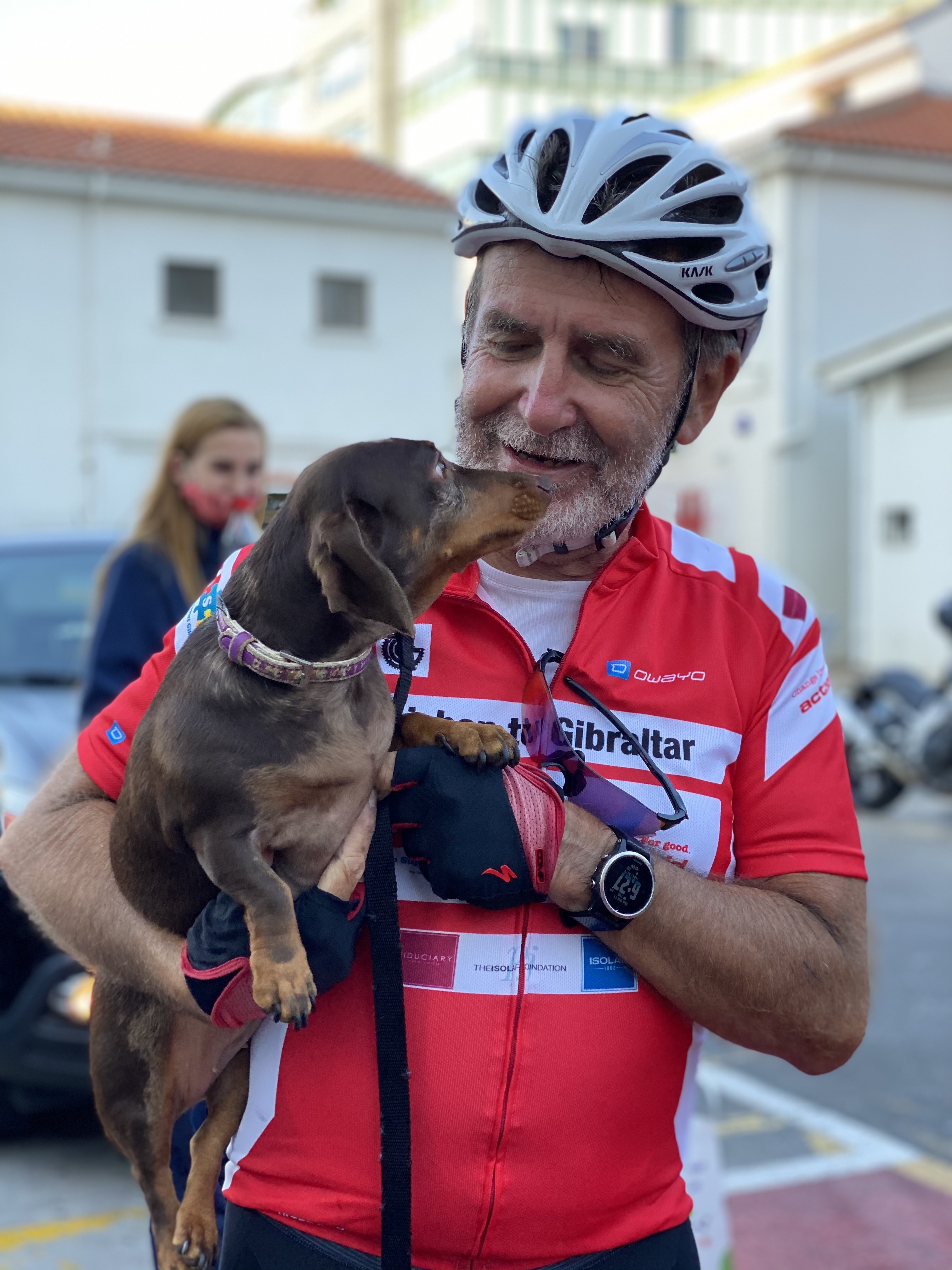 “I feel great at the moment,” Mr Hook told the Chronicle.

The journey to Lisbon was not an easy one for Mr Hook and Mr Galton as their flight was delayed getting there and they had about only one hour’s sleep before they set off for the longest day of the four-day challenge.

“I struggled the first day but after that it has been fantastic,” he said.

He said leaving Portugal and entering Spain was one of the most memorable moments of the trip.

“The entrance to Spain was really beautiful but coming here and seeing the Rock was just very special, because it was the end of the journey.”

That journey started when “it was just an idea I had and I put it to Ian and it went from there,” he said. 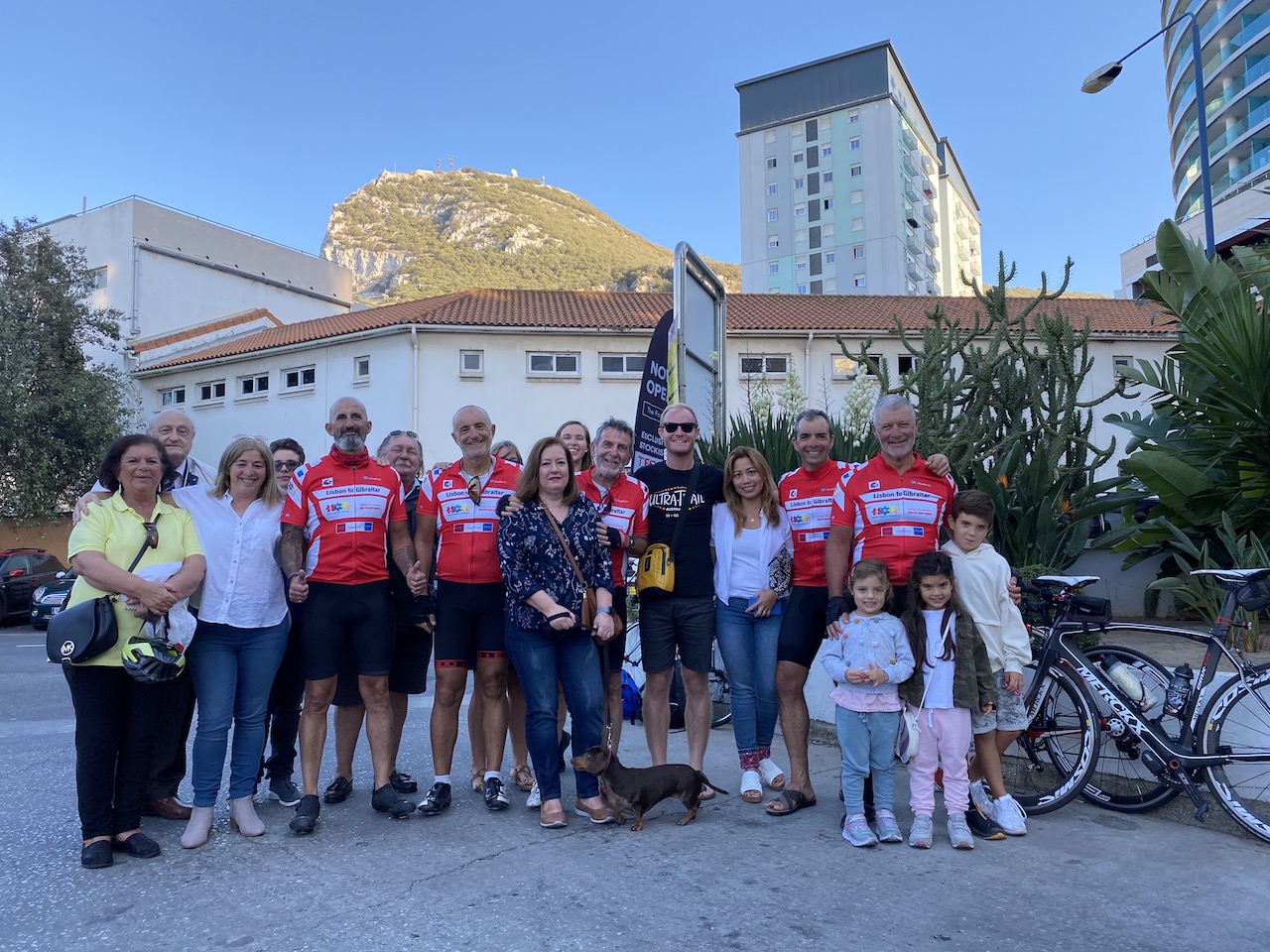 One other thing the cyclists noticed was having to cycle on some bumpy roads, an uncomfortable experience at times. However, they were amazed at the reason why these roads were bumpy.

Mr Howes explained that it was to protect lynx cats. Motor vehicles would need to slow down and the animal would hear them coming and be able to get out of the way. But, these roads “are useless for bikes”.

The cycle down was uneventful in terms of injuries and there were only a small number of minor incidents with the bikes. Arriving at a hotel each night, the men would wash and hang out to dry their cycling tops promoting the challenge.

They would eat lunch on the side of the road prepped by their support team in a bid to keep their expenses down. For them this was about the charities and raising as much money and awareness as possible. 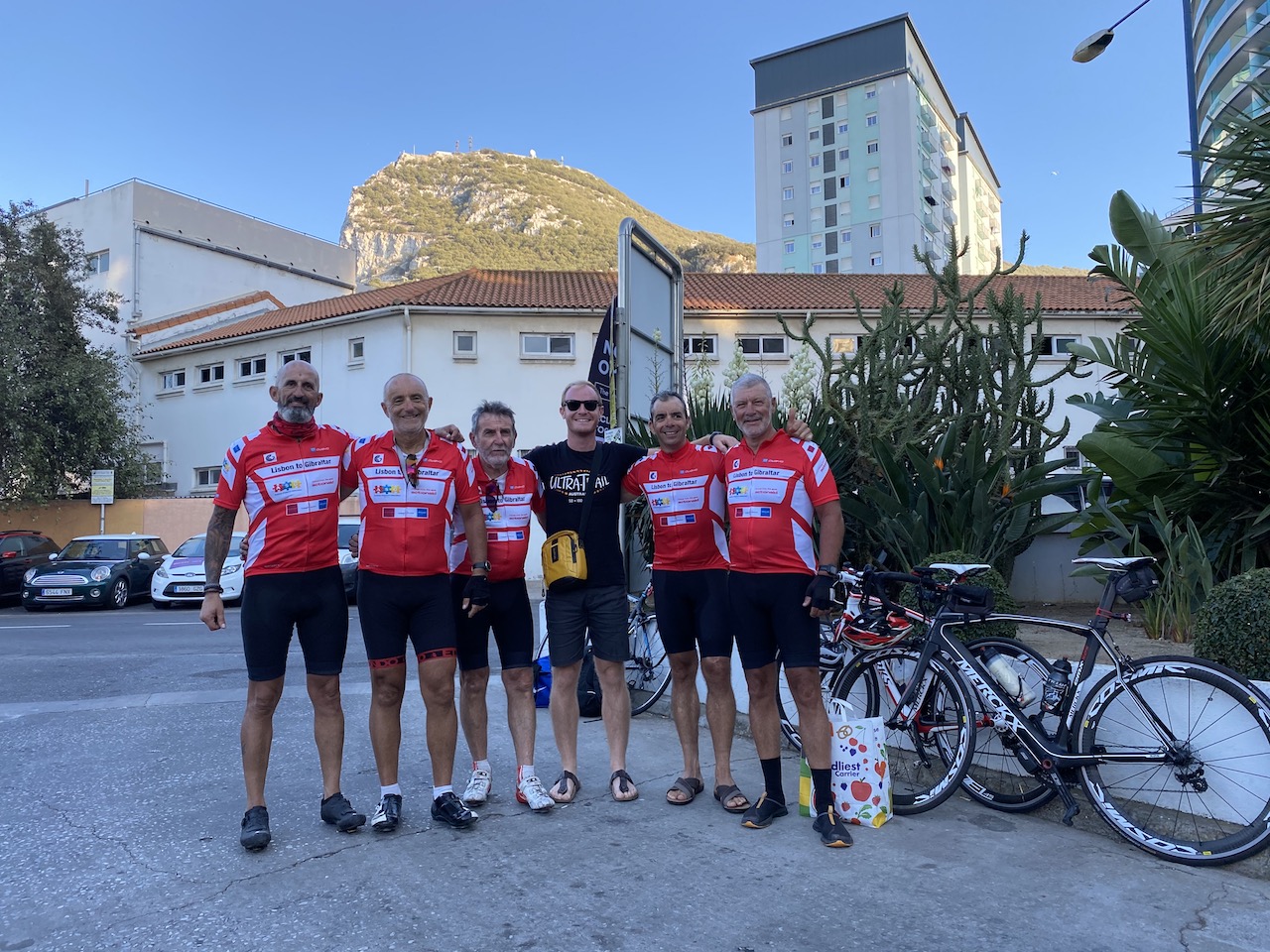 Ensuring they ate and dealt with any issues swiftly was their support team. Mr Johnson had nothing but praise for the men and how they welcomed him as a late edition to the team.

“They were awesome, every bit of support I did they helped with also along the way,” said Mr Johnson.

“Normally I do this sort of thing [long distances on a bike] so it was good to see and give something back. It’s a different point of view being a support crew. I was jealous as I wanted to be on two wheels instead of four but it was a special ride.” 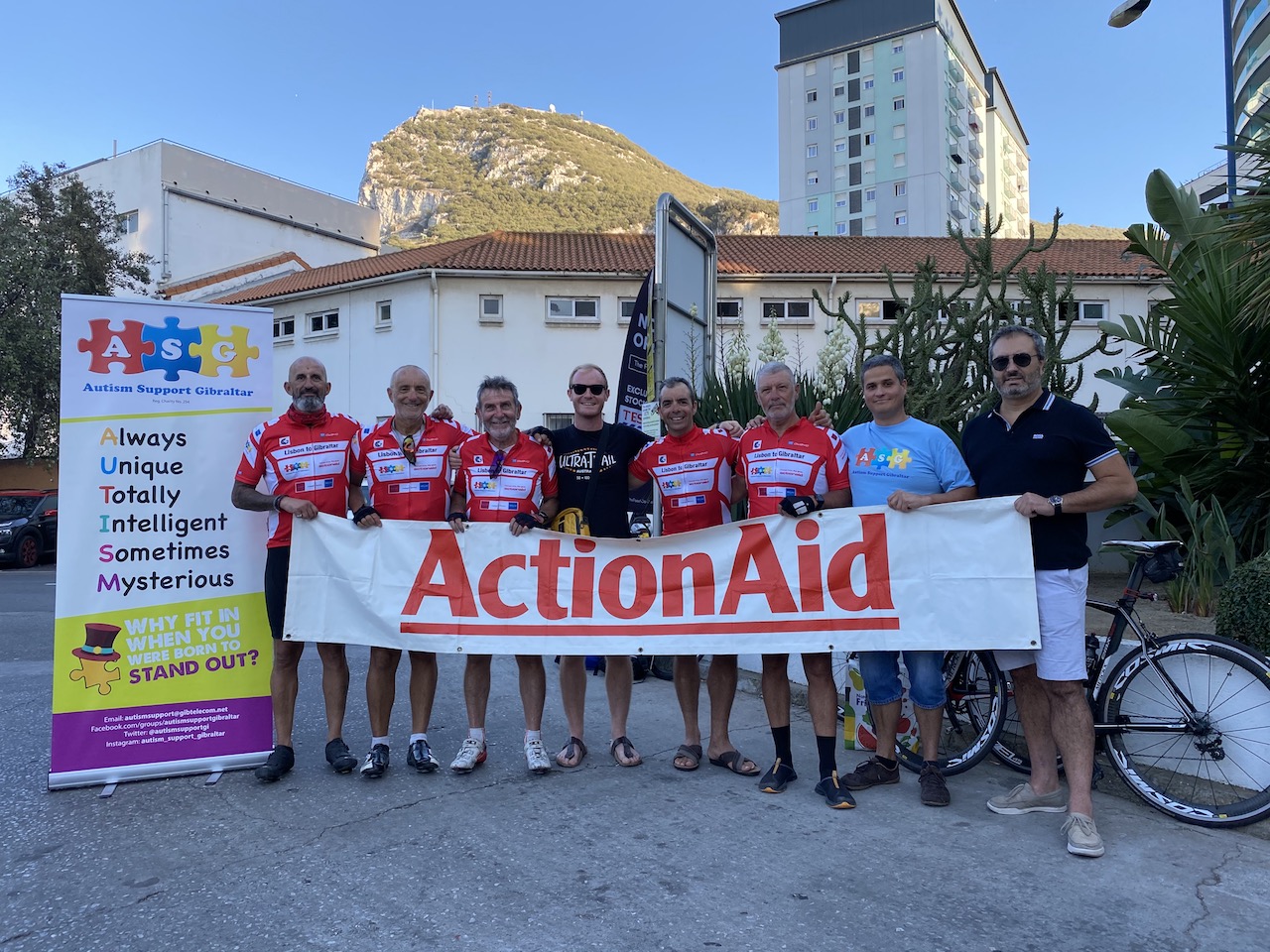 Eugene Howes from ActionAid, Ian’s father, told the Chronicle that his son and the other four cyclists were making people aware of autism and the work of ASG,, but also about ActionAid and how that charity helps so many children.

“There are people actually dying as we are talking,” he said.

“Every half a minute someone below five dies from lack of food, let alone Covid and tsunamis and whatever.”

“This highlights the fact.”

“We get money, of course we get money, and sometimes people ask you ‘do you really believe in this, does the money really go to where it is supposed to’?”

“I go, look, I don’t care so long as one individual doesn’t die because I have done something about it I consider myself satisfied. That is the how you need to look at it. That individual that is going to die could be your grandson or granddaughter but it isn’t? Why? Because we live in Gibraltar and how lucky we are,” he said.

David King from Autism Support Gibraltar, added: “This means a great deal because we depend on the goodwill of the community to keep us going. People like the team we see before us today really are the crux of that and we are massively grateful.”.

“Autism effects an estimated one in every 86 people, that is not just children but grown-ups as well. There are a huge number of people in Gibraltar effected either directly or by having a family member or loved one with autism.”

“What this will enable us to do is to carry on that effort to try and make life better all round for people and families.”

At present due to not knowing exactly how much they will receive but once they do get it it will go towards different projects they had in the pipeline before the Covid pandemic. 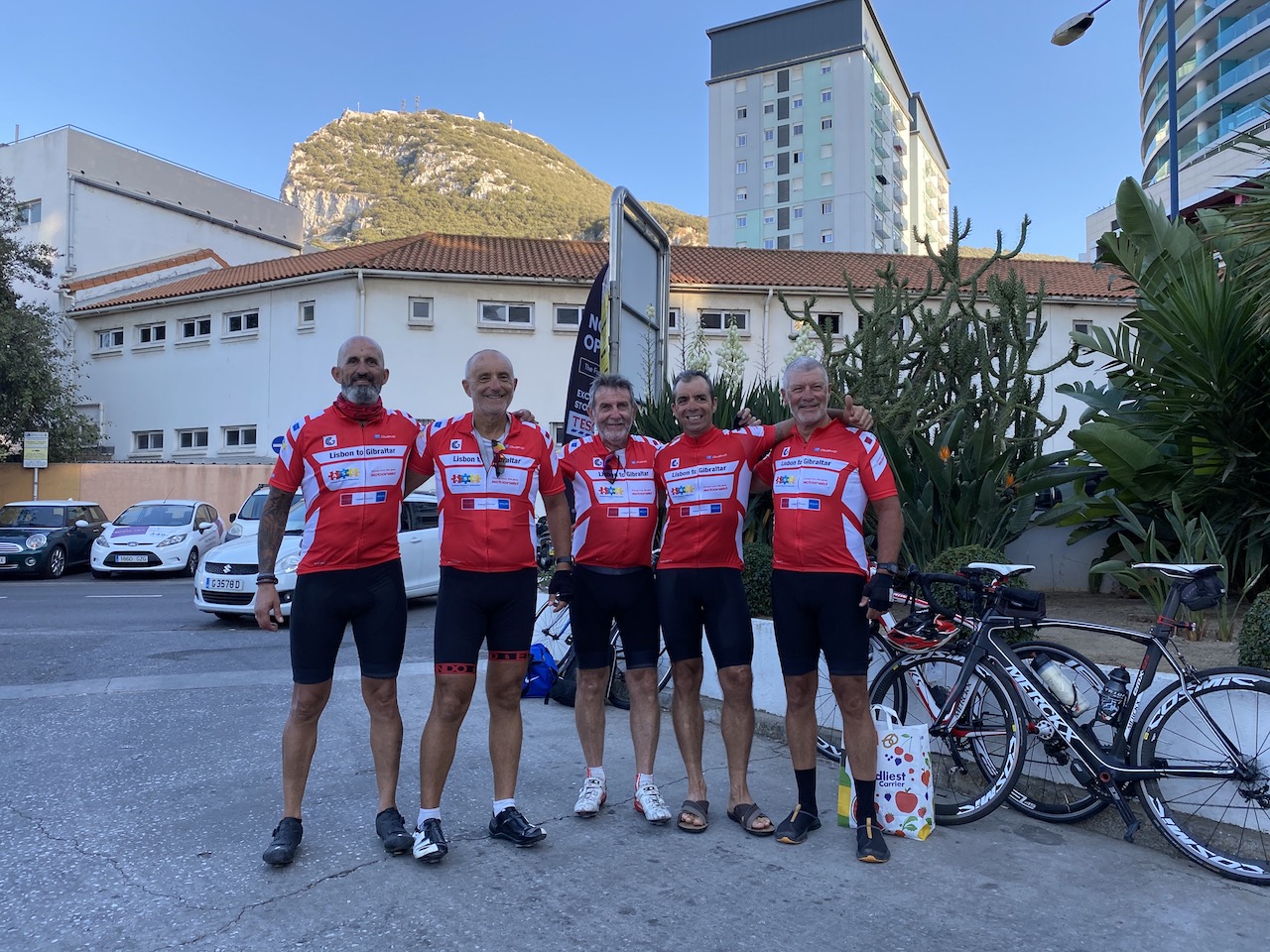