A group of demonstrators delivered a letter to the Governor on Monday evening highlighting their “heartfelt” concerns about the negotiations for a UK/EU treaty on Gibraltar’s future relations with the bloc.

In the letter, the demonstrators said they felt the Gibraltar Government did not have a mandate to agree to any treaty without first putting it to a referendum “…so that the citizens who categorically want to remain British and be part of the UK can voice their choice.” 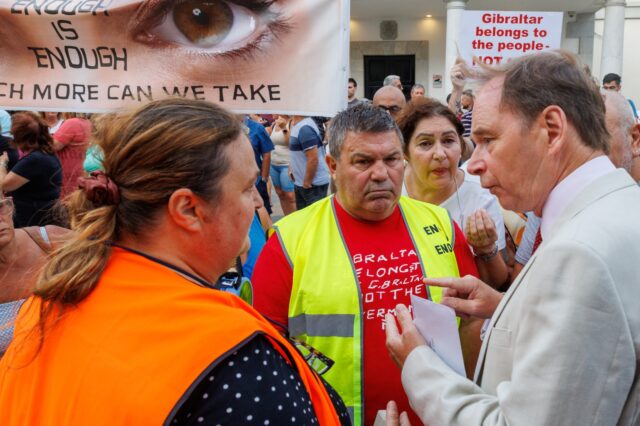 The demonstrators also raised concerns about last week’s budget announcement, accusing the government of “frivolous” spending and highlighting that many families were suffering due to the rise in the cost of living.
On the march from Casemates to Convent Place there were calls for devolved integration and for a referendum, alongside chants against the Chief Minister.

The demonstrators were met outside The Convent by the Governor, Vice Admiral Sir David Steel, who collected the letter and exchanged a few words with them.

Sir David underscored the work carried out in partnership by the UK and the Gibraltar Government, reassuring the demonstrators on Gibraltar’s British sovereignty and expressing confidence that a safe and beneficial deal could be reached.

In reply, the demonstrators said people should be allowed a say on a deal that affected their future.
Police estimated there were about 150 people at the demonstration.