Photo of a previous virtual meeting of the DPC.

The Gibraltar Government’s plans for the beautification of Line Wall Road, to be named Line Wall Boulevard, were discussed at Friday’s virtual meeting of the Development and Planning Commission.

These works do not fall under the definition of development under the Town Planning Act and therefore permission for this Government project is not required by law.

The Government is also not required by law to present the scheme to the DPC for feedback, but traditionally does so.

The scheme runs from the Holy Trinity Cathedral to the ICC car park.

The planned extension and beautification of promenades along the length of Line Wall Boulevard which is set to include landscaping and planting of trees, the provision of outside spaces, which aims to provide opportunities for leisure and catering establishments.

The Town Planner’s comments on the proposal included the lack of information in respect to how the loss of parking on Line Wall Road will be managed and the details for the proposed children’s park by the Holy Trinity Cathedral, which may need planning permission.

Consideration to make the cycle line two-way was requested, a comment that was echoed by some members of the DPC including Government Minister Steven Linares.

Town Planners also asked for bicycle racks to be included in the scheme.

At vehicular cross over points, Town Planners want consideration to be given for a change in road surface and a “speed table-type design” to highlight the cross over.

It noted that the current plans have no provisions for loading areas and that the existing refuse area should be designed into the scheme.

Bus stops were also a concern, and the Government was asked to consider a flexible design that would allow bus traffic in either a north or south direction.

Concerns raised by the DPC members included the use of mature trees in an area where there are underground utilities.

Janet Howitt from ESG was concerned that these trees may not be planted and planters would be used instead.

Representatives from CGA Architects, who are working on the project, said different species of trees were being looked at with attention given to the roots of these mature trees.

Mark Gregory from Landform, who consulted on Commonwealth Park, will be in Gibraltar on Monday to discuss plans for the area.

Mrs Howitt also raised the possibility of underground waste disposal and was told that had been looked at but it would not be possible.

With respect to bus stops an ‘island’ that would facilitate using both sides of the bus was suggested by the Town Planner Paul Origo.

He was told that was one of the options currently being looked at by the Government.

The flow of traffic and the impact of the full time closure of Line Wall Road was also discussed, with Ms Howitt expressing concerns that a survey on the impact on traffic elsewhere of the current three-day closure had not been concluded.

She added that the survey had not been conducted when children were back at school and vehicle usage is arguably at its highest.

She was informed a survey is presently ongoing of the area and along Queensway. It was not made clear as to when that survey started and is expected to finish.

The Government’s planned project for elderly residential homes at 1 Bishop Caruana Road was discussed by the DPC members and approval was gained with seven members in favour and three members against the project.

Plans to create the development via a 50/50 joint venture with a Chinese company were announced earlier this summer. 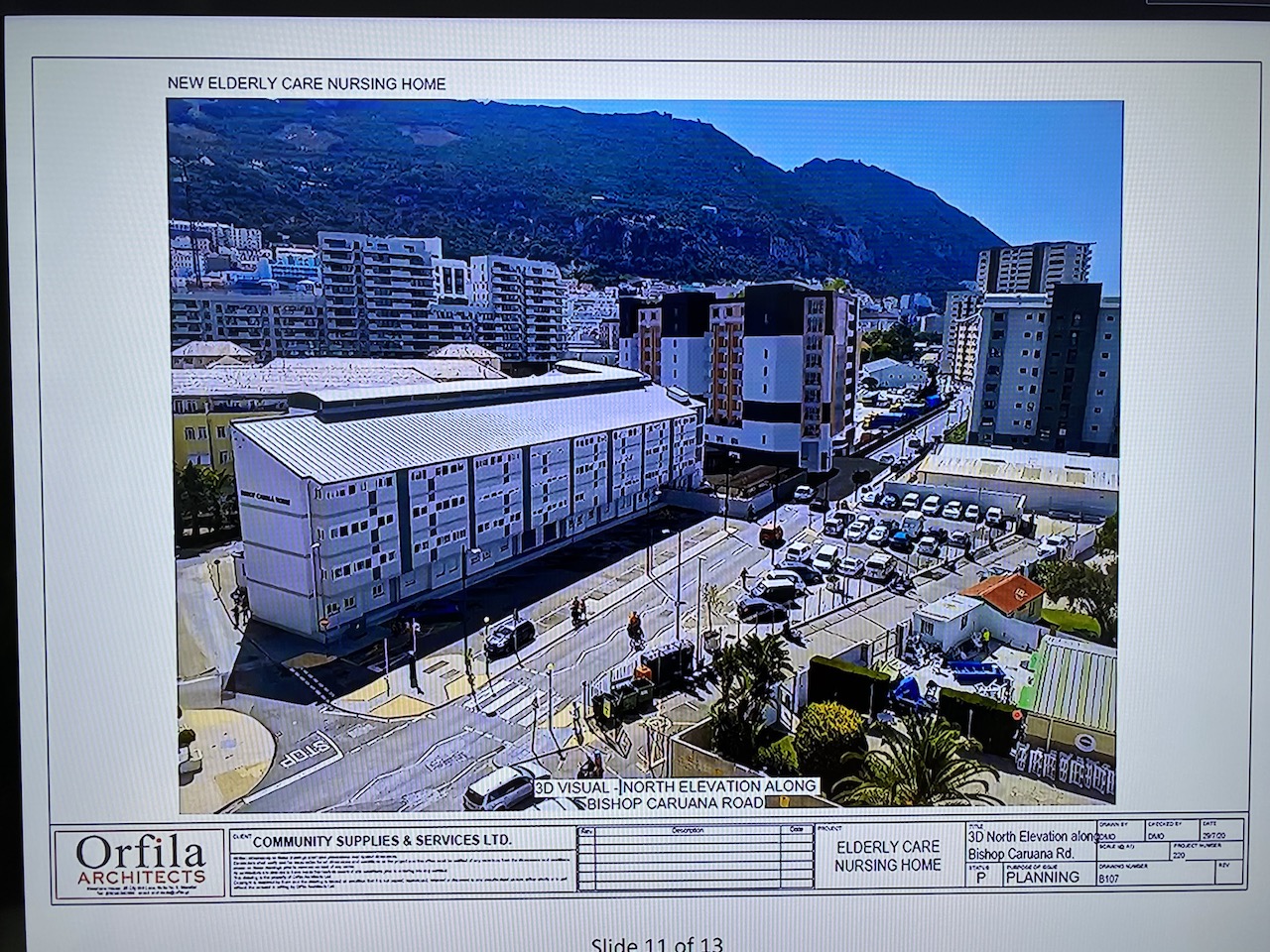 The company would use modular construction techniques to erect the home which would be run privately.

An objector to the project, Dion Darham, the representative from the architect David Orfila and members of the DPC discussed concerns on making decisions without knowing what will happen to the nearby Rooke site and the future plans for the area.

Presenting his concerns to the members Mr Darham called the development “a giant warehouse for the elderly” and said it “reinforces the appearance of Gibraltar as an incoherent ‘concrete jungle’. An ugly ‘Birmingham-On-Sea’.”

He likened the design to that of Lego with no aesthetic merit and sparse greenery.

“Rooke offers a unique and unusual opportunity,” he said.

“The site deserves a master plan for a traditional pedestrianised neighbourhood design with mixed-use buildings, so that the daily needs of life are within a short walking distance and where the elderly can move around freely and safely.”

“All within an aesthetically pleasing, human-scale environment, built in a familiar architectural style.”

He believed the provision of car parking spaces reinforced the dependence locals have on cars, which is against the Government’s traffic plan, and that the car garage would mean that the level would not be suitable for different commercial entities such as a café.

Overshadowing and wind induced by the building was also a concern.

He suggested two or three smaller blocks with a public realm courtyard linking each building would be nicer for the residents.

He also stated that the building would not be environmentally friendly.

“Importing modular containers from China, made from steel using imported coal, is not a low-carbon solution,” he said, adding that there are modular builds that are environmentally friendly being produced in Europe.

Some DPC members agreed with Mr Darham and said the need for public places imposed on private developments should be applied to the Government too.

Addressing the Commission, Mr Orfila said the objections did not have much substance and that the project could not be compares to other developments around the world because land in Gibraltar was at a premium, meaning high buildings were the obvious solution.

“I dispute the notion that it is a Lego or it is a warehouse,” he said.

“It is a unique building that caters for the elderly nursing home.”

When pressed by DPC members he said he would look into providing some amenities, but that this would depend on the amount of space the ground floor takes up.

He noted that the problem with the development is that it is next to a “barren land”.

He also expressed that he is limited by the brief he has been given, be it with reference to the size of the plot of land, the number of rooms required and the style of accommodation.

The Town Planner's report expressed its disappointment at having to consider one small element in what will be a larger redevelopment proposal for the area.

It noted that it understood the need for the elderly residential home but that the modular development would be constructed quickly and would exist before any plans for the Rooke site were formally agreed.

With respect of the architectural treatment of the building, the report acknowledged that buildings like this have standardised requirements which make additional elements had to add.

Approval of the scheme was recommended by the Town Planner.