Photo of William Goodge's mother Amanda. Former rugby player William has his sights set on breaking a world record as he prepares to take on 48 marathons in just 30 days.

A former rugby player has his sights set on breaking a world record as he prepares to run 48 marathons in just 30 days. 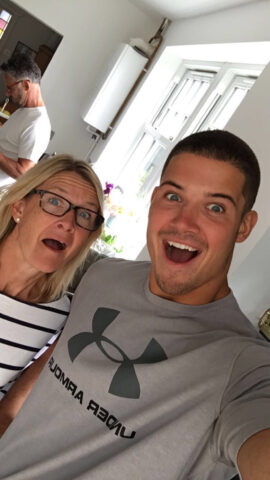 William Goodge’s mammoth challenge will see him pounding the pavement from Cornwall to Cumbria in a tribute to his mother, Amanda, who died from cancer.

The endurance runner will undertake marathons in all 48 English counties throughout September, finishing with the London Marathon on October 3.

During the epic series of marathons, Mr Goodge will cover more than 1,200 miles in aid of Macmillan Cancer Support, which supported his mother at the Macmillan Primrose Unit at Bedford Hospital.

He said: “The Macmillan nurses who work within Bedford hospital, where my mum had most of her treatment, were always there for her when she was diagnosed with cancer.

“Knowing there is an available support system for the cancer patient and the family too was incredible. It’s a tough time for so many people and I found comfort even knowing there was support available if I or my family needed it.

“Everyone I’ve met in Macmillan has a true heart of gold and the work they do every day is beyond important.”

For the past three years, the 27-year-old model has spent Christmas Day running near his home in Ampthill, Bedfordshire, as a way of coping with the loss of his mother, who died aged just 53 after being diagnosed with Non-Hodgkin lymphoma.

Remembering his mother – who worked for years as a nurse before opening a cafe – he said: “She was the kindest person you could ever meet and never had a bad word to say about anyone.

“When it came to her family, she was very protective. She was very selfless and always wanted to do everything for everyone.”

As a former rugby player for championship side Ampthill RUFC and now a seasoned runner, Mr Goodge says he is physically well-prepared for the 30-day challenge.

He added: “Those moments of complete depletion, when you feel like you shouldn’t take another step, is when I feel closest to my mum.

“I am inspired by her strength in her cancer fight and the same strength other people with the disease show.”

He is kicking off his series of marathons in Northumberland on Saturday, finishing on October 3 with the London Marathon.

Melanie Humphreys, regional fundraising manager for Macmillan, said: “The last 18 months have been incredibly challenging for many of us, especially people living with cancer.

“It is more important than ever that we are able to provide high-quality support that reaches everyone from the moment they are diagnosed.

“At a time where Macmillan’s support is needed more than ever before, we are facing the aftermath of a significant drop in our income as a result of the pandemic.

“We cannot thank William enough for his endless efforts to help us raise the vital funds we need to be there for people living with cancer.”