Back To Login
Local News Sports

Football makes its slow return towards new normality this Wednesday

Halted since March 13 football in Gibraltar will make its first tentative steps as from tomorrow Wednesday.
Restrictions in Gibraltar on all contact sports as it transitions through the Unlock the Rock process will maintain its activities under a non-contact environment meeting Public Health Gibraltar guidelines.
This was announced today Tuesday evening by the Gibraltar Football Association.
In a statement this evening the association announced that as from tomorrow Wednesday, "football activities will resume at the Victoria Stadium via its recently approved Return to Football Program (the “Program”).."
"Gibraltar’s first phase of Returning to Football will see Clubs, Teams (of all age groups) and National Squads return to non-contact training. This phase is expected to last up until the next Unlock the Rock phase on 19th July 2020. "
A test training session will be held this Wednesday for a selection of National squad players, and upon successful completion, allocations will be opened up to Clubs starting on Thursday June 25.
Both pitch one and two will be divided, into four and two zones respectively, with only a maximum of twelve players allowed in each grouping.
Football, the largest of the contact sports in Gibraltar, is among the last to make its return others already actively pursuing a non-contact activities based programme. Basketball was among the first to return alongside hockey and netball. Only this past few days rugby has also its return with the juniors and minis involved in non contact sessions on Saturday and the ladies and men on Monday.
The return of football activities to our sports facilities comes after weeks of planning behind closed doors. Working with the GSLA and Public Health, the Gibraltar Football Association have been planning a restart which is aimed at seeing a safe transition to allow clubs and national squads back on the field for training in the short term.
With clubs such as Europa, Lincoln Red Imps and St Joseph's looking towards a mid August start of their European club competitions, calls for suitable arrangement were made last week. These came immediately after UEFA's announcement that Champions League and Europa League football would return in August.
Football professional financial structure, has added an additional pressure to resume activities following the restart of leagues such as the Bundesliga, La Liga and Premier League. However, the local governing body has resisted the calls indicating the high cost and resources required to make a safe return under the current restrictions were not viable to consider even in a short term basis.

The following guidelines will have to be adhered to by all Clubs and Teams who return to training:

All players need to arrive with their own kit and personal drinks.
Entrance to the Victoria Stadium for players and coaches will be via the designated drop off and pick up point beside Pitch 2 (CEPSA).
Staggered arrival of players/coaches to be managed by each club.
All players and coaches to be greeted, at entrance, by a club representative with hand sanitising spray/gel.
Boot hygiene need to be enforced by club representatives. Player’s boots to be sprayed with sanitiser on entry and exit at the Victoria Stadium.
There will be no use of Dressing Rooms.
Pitch 1 will be divided into four quarters/zones with a maximum of 12 players/coaches in each quarter/zone of the pitch.
Pitch 2 will be divided into two halves/zones with a maximum of 12 players/coaches in each half/zone of the pitch.
Players need to be advised to adhere to social distancing guidelines at all times.
All Training sessions must be non-contact.
Players need to leave as soon as each training session ends.
At present all training sessions under the Program will be monitored by a Gibraltar FA Delegate, who will ensure all Clubs and Teams are adhering to the guidelines.
Records of all players/staff attending each session must be submitted by each club to the GFA delegate on arrival. 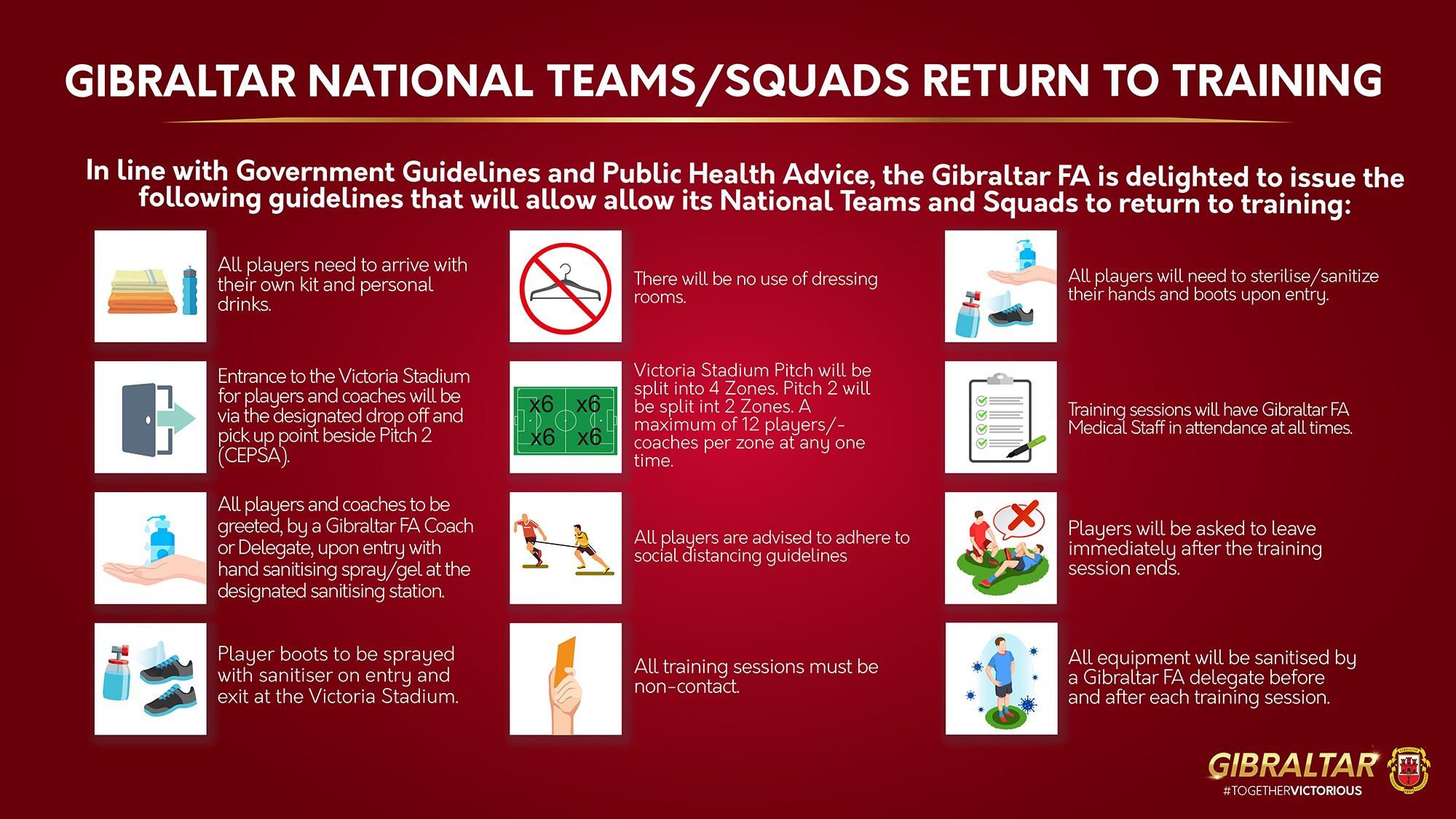 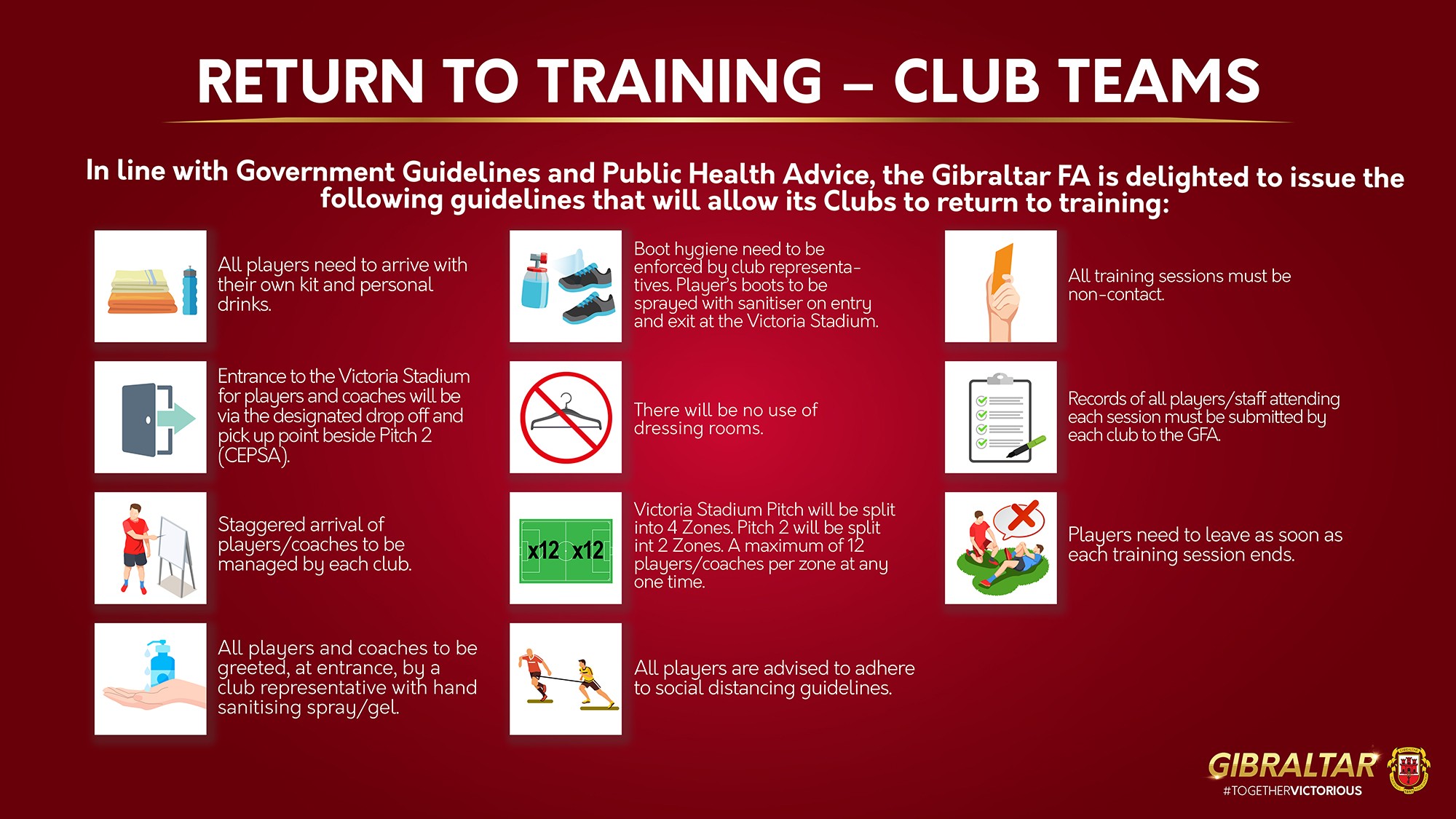