For College students, 1789 is a key date in Northern Defences fundraiser

Students and teachers at the Gibraltar College this week met their target walking a distance of 1789km to raise £1789, in a charity event linked to the Northern Defences.

The date 1789 is carved in stone on many of the locations along the site.

As part of their initiative to reach out to the community, students and teachers set themselves a challenge of walking 1789 km collectively, on a relay basis.

The route was between the College and the Northern Defences, and the target was set only days prior to the GBC Open Day. 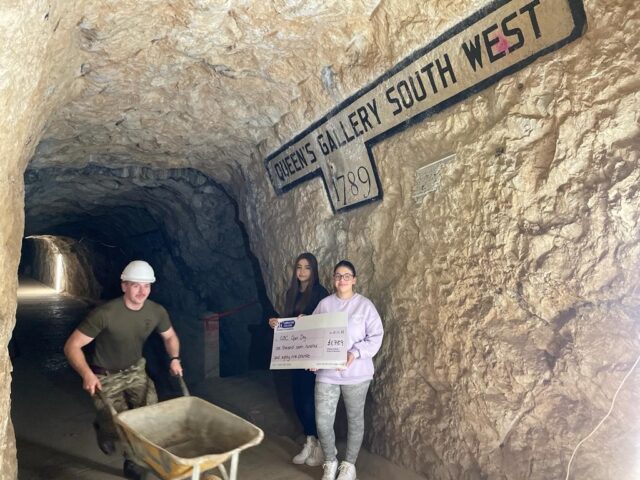 Organising the event was Mrs SJ Roberts, who described the event as part of the Gibraltar College Enrichment Programme, which has been inspired by the works carried out at the Northern Defences.

She said the early stages of the course had helped students develop character in driving and managing events.
Students had learnt the value of teamwork in a manner that no textbook could ever achieve.

“We have received massive support from our community throughout this period but perhaps the most significant moment was on Monday when it seemed that our target of 1789 km was at risk,” she said.

“It was then where we received assistance from the Office of the Deputy Chief Minister through Project Director Carl Viagas, in a manner that was totally unexpected.”

“We were escorted and provided access to the Queen’s Lines and joined by the Royal Engineers.”

“Deployed at the Northern Defences to carry out clearing works, approximately 20 engineers assisted in having their efforts recognised as part of our challenge.”

“Once again, we are extremely grateful to this military unit who have their roots deeply embedded in Gibraltar.”

“We witnessed kilometres being clocked by future officers as they tirelessly sped with wheelbarrows full of debris from one end of the defences to the other.”

“With each run of approximately 400m it was a matter of hours when our 1789 km challenge was met.”

Mrs Roberts thanks Lewis Stagnetto Ltd, who had heard of their achievement and provided the balance to reach a fitting total of £1789.

“I was almost overwhelmed when we heard from Mr Maurice Stagnetto who kindly stepped in to support our efforts,” she said.

The Deputy Chief Minister, Dr Joseph Garcia, welcomed the College’s achievement and recognised that the Northern Defences project, which commenced as a dream back in 2014, was now becoming a reality attracting various visitors and events.

“His Majesty’s Government of Gibraltar has been resolute and consistent in investing in our heritage and will continue to do so, but achievements such as the one which we have witnessed are indeed praiseworthy as we see our community come together not only in appreciation of our assets but also to support the most vulnerable,” he said.