From hospital bed to 42km, ‘Running saved my life’

Local athlete Louise Atkinson will run her first marathon in Seville next month, three years after she was given the all clear from breast cancer.

Ms Atkinson will achieve hospital bed to 42km on February 23 after she fought a battle with breast cancer by lacing up her trainers and hitting the road whenever she could.

Accompanied by her fiancé Les McKee, the couple are set to marry this summer, Ms Atkinson is currently building up her mileage running distances of 20 plus kilometres in preparation for the big race.

Ms Atkinson told the Chronicle about her battle running very literally saved her life, when the weight lost through running meant she was able to feel a lump in her breast.

“It was the best thing he ever bought me, it saved my life,” she said.

In June 2016 the couple were due to move to Ibiza where they were going to buy a bar. But just two months prior to this Ms Atkinson started feeling unwell.

“I was not myself at all, I was tired all the time,” she said.

“I was exercising so I thought it was down to that.”

“I went to the doctors and she said you have got anxiety and its probably because you are moving away. It is a big change in your life.”

“In June I went back to the doctors because I had found a lump.”

Ms Atkinson had lost three stone and was able to feel the lump in her breast as a result.

This marked the start of Ms Atkinson’s battle with breast cancer and she realised that it also explained the anxiety she had been feeling.

Plans for the move to Ibiza were cancelled, they got their old jobs back and moved into her Mum’s Liverpool home.

“We just had to crack on with two years of treatment then,” she said, using the word we as she believes that it was Mr McKee along with her mother who kept her going throughout those months.

“We had signed up to do a five kilometre in January 2016, but we ended up running ten and it was the first ten we ever ran.”

“That is when it all began, I lost the weight and it saved my life really.”

It was not just then that running helped her with her health. While undergoing treatment she credits the running with keeping her focused and positive.

“We did this run called the Scouse 5K where you run with curly wigs on and it was for Clatterbridge which is where I received my treatment,” she said.

“So we thought we would get a few of us together, raise some money and give back.”

Raising that money and being part of Team Atko [called after her] kept her focused.

“I kept my diet right, I kept running and I just kept in my head that I wanted to do these things and tick these things off like the half marathon,” she said.

She did the Great North Run, the distance of a half marathon, right after she finished her treatment of injections and chemotherapy in 2017.

When she completed the distance, she said to herself that was a one off.

“I am never doing a half marathon or anything more than that ever again. And, here I am,” she laughed. 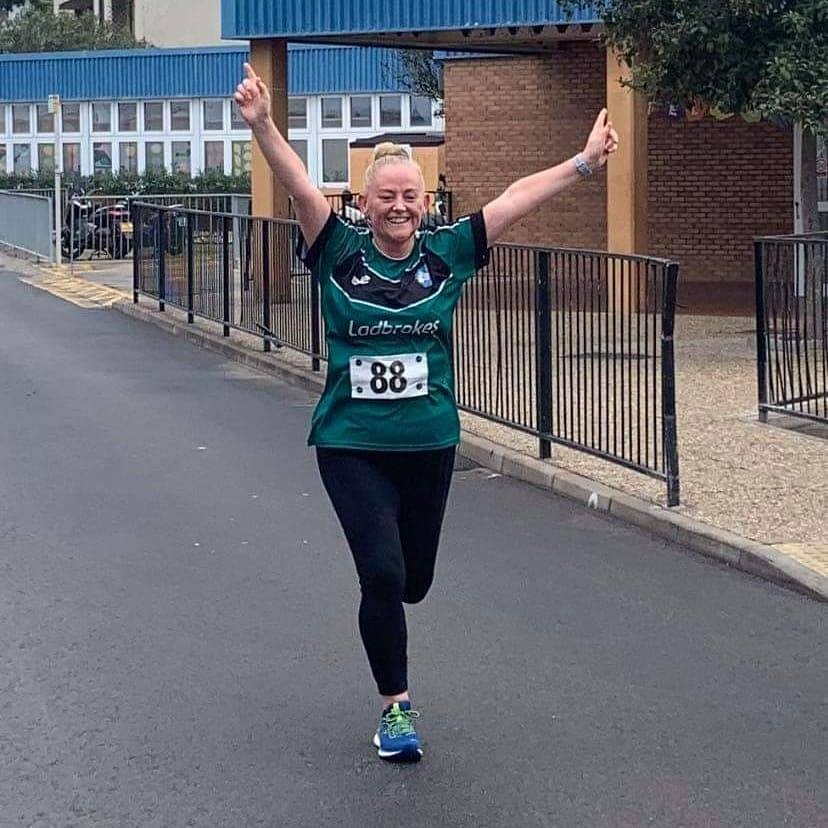 Ms Atkinson and her fiancé are founding members of the local Carpe Diem Running Club and moved to the area in January 2018.

The move to Gibraltar came about because it still gave them the lifestyle they wanted and the healthcare was also very good.

“The GHA have been fantastic out here with me, I can’t fault them a bit,” she said.

“The Cancer Relief Centre as well they have helped me loads.”

She added that running has been important to both of them and she notes how much Carpe Diem is helping other people with their achievements.

“Everyone always says ‘oh you’re an inspiration’ but I don’t feel like that,” she said.

“I used to get embarrassed when people used to tell me you’re so brave. But you really have no choice.”

Ms Atkinson added she did not let cancer beat her she added crediting Mr McKee with being such a rock at that time who repeatedly told her that he never doubted her and her strength to overcome the disease.

Ms Atkinson never had a full marathon in her sights until she came to Gibraltar.

“Hopefully it will be more of a mental battle instead of a physical one.”

“I feel better than ever, I feel fit, I feel well, I feel well in my head mentally and I don’t really look back anymore.”

“February this year when I do my marathon, I will be three years clear.”