Four young winners have been selected for the Gibraltar Defence Police (GDP) drawing competition.
Last year, the GDP visited the HELM Point Community Centre at Four Corners to carry out several Road Safety Awareness sessions with members of the Youth Club.
As part of these sessions, those who attended were given the opportunity to enter a drawing competition.
After careful consideration by the GDP officers, Police Sergeant Dylan Borastero and Police Constable Diandra Desoisa selected Lavinia Noteyoung, Macy Sutton, Oscar Waldrom, and Emily Harris-Joce as the four winners.
Due to Covid-19 restrictions, the four winners had to patiently wait to claim their prize and only recently were they able to visit the GDP Headquarters.
Spending some time in a policing environment, Emily, Lavinia, Macy and Oscar were shown around the facilities at the GDP Headquarters and saw for themselves the control room where the day-to-day operations are carried out.
They also joined in with officers carrying out a patrol in one of the GDP vehicles and met the Specialist Firearms Officers.
The highlight of the day was the opportunity to mingle with the GDP police dogs, Mira and Arry, who together with their handlers, carried out a display especially for the winners. 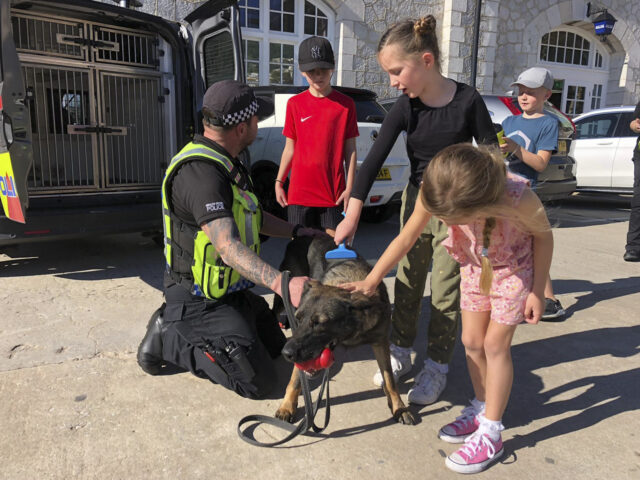 The GDP would like to thank all of those who took part in the drawing competition and looks forward to seeing other future police officers attending the GDP Headquarters.