Calpe Giants are now just two wins away from winning the 2022 Indoor League after they beat Rugby CC last night.
Rugby CC won the toss and elected to bowl first, Harrison and Collado both got off to a good start getting Calpe to 73 after 5 overs. However Rugby CC battled hard and run Harrison out for 23, Collado was out for 30. Bokhari fell to Lizzie Ferrary whilst youngster Bruce was run out for just 3 runs. Zammit battled on and added a further 20 runs from just 9 balls as Calpe Giants finished on 122. Pick of the bowlers for Rugby CC was Lizzie Ferrary finishing with figures 1 for 28.
In reply, Rugby CC got off to a bad start losing captain Advani with the score on 15, but Atoloye and Barley had other ideas as they steadied the ship for Rugby pushing the score along. However Atoloye finally fell for 26, bowled by Harrison, who also got Barley stumped for 30, a brace effort by Rugby but fell 26 runs short as Harrison finished with 3 for 13.
Onto the second game and Whelan run the show for Entain.
Pirates won the toss and elected to bowl, it seemed like it would be a great choice with 3 wickets falling in the first 2 overs and Entain struggling on 12-3, however Matt Whelan had other ideas as he pushed the ball all around and soon enough passed his half century, he was finally out on 54 runs as Ryan Grimes had him run out as Entain ended on 102. Amy Valverde pick of the bowlers for Pirstes as she returned figures of 1 for 15.
Pirates needing 103 to win got off to the worst possible start as they lost Mark Garratt in the first over and Grimes and Gilbet before the 3rd. Pirates were 16-3 at this point, could someone save them? Unfortunately not this time as wickets kept falling and Pirates fell short of the score and were all out for 62 runs, with Scott Blake and Blaise Cook both taking two wickets each. 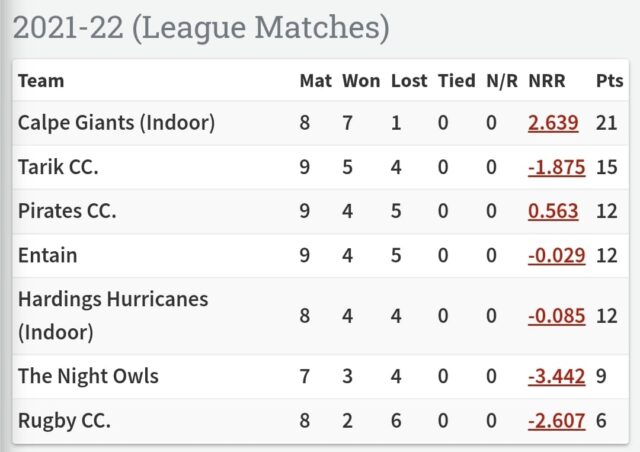