Gibraltar Futsal provide positives from a 7-1 defeat against Sweden

The Europa Sports complex was the home to Gibraltar futsal’s latest international friendly this Monday.
Gibraltar played against Sweden ranked 61 in the Futsal world ranking against Gibraltar’s 117. Under UEFA Futsal co-efficient ranking Sweden was at 32 compared to Gibraltar’s bottom three of 48.
Gibraltar’s last encounter against Sweden in 2017 had ended in a 5-1 defeat in the Futsal Euro qualifiers.
Much had changed though in Gibraltar Futsal since then with a new crop of players now rising through the ranks and greater interest from local players in the top division which provided for greater competition for positions in the national team. However, much had also changed globally in Futsal with Sweden on the night showing how the differences between the two nations was still as great as they had been when they first met.
The differences in attitude on the court for Gibraltar from past defeats were apparent with the hosts making life difficult for their opponents even though finishing with a 7-1 defeat. Any ideas from Sweden that they would cruise through the match were soon dispelled as Gibraltar put in a hard shift from the kick off.
A disciplined display keeping a tight defensive posture whilst taking the game to Sweden’s half ensured that the visitors were kept at bay during the first nine minutes. Their first goal came on the ninth minute after a gap had been left behind the defence during a freekick leaving space for a shot. A mistake they were soon tried to learn from but which emerged on a number of occasions later, although not ending with a goal.
Moxham who had made numerous saves to keep Gibraltar in the game was unable to do much about it.
Although Sweden had the better part of the possession they did not have a clear path to goal and looked far from a team that would end up with a 7-1 victory in the first half. Their strength showing towards the latter part of the match as Gibraltar started to look tired.
Gibraltar, who had several chances to open their score finally put one past when a rebound from a freekick fell to Nafal who from a tight angle squeezed it in for the equaliser.
The celebrations were short-lived with Sweden grabbing their second goal just a minute later. A speculative shot squeezing past defender and keeper to take the lead again.
Gibraltar were then penalised for a foul and had to face a penalty foul which provided Sweden with a cushion into the second half.
Sweden started the second half confidently but were soon tested with two good attempts by Nafal.
The visitors struck their fourth after a good threaded move by Gibraltar did not find its final pass seeing Sweden respond with a quick counter and a goal.
Gibraltar had their chances as they continued to look for their second goal. However, it was Sweden who found their fifth with a cheeky well crafted lob over the oncoming keeper after the ball was chipped over the defence leaving the Swedish attack alone in front of goal.
Jayden Parody was unlucky not to find the net after crafting his way from deep in Gibraltar’s half into a goalscoring position only to see his shot curl just wide off the top corner.
Jamie Bosio also creating another chance moments later stealing well and seeing his shot cleared by the keepers feet and sending Sweden on the counter.
Sweden’s sixth goal came with five minutes left on the clock after ploughing their way past Gibraltar’s defence and laying the ball into the middle to slot through to goal.
With just minute left and with Gibraltar looking tired but still battling Sweden stamped their final mark with a seventh goal which highlighted the differences between the two.
Although a 7-1 defeat will have been a disappointing result Gibraltar provided some positives with a confident display against a side which far outranked them. 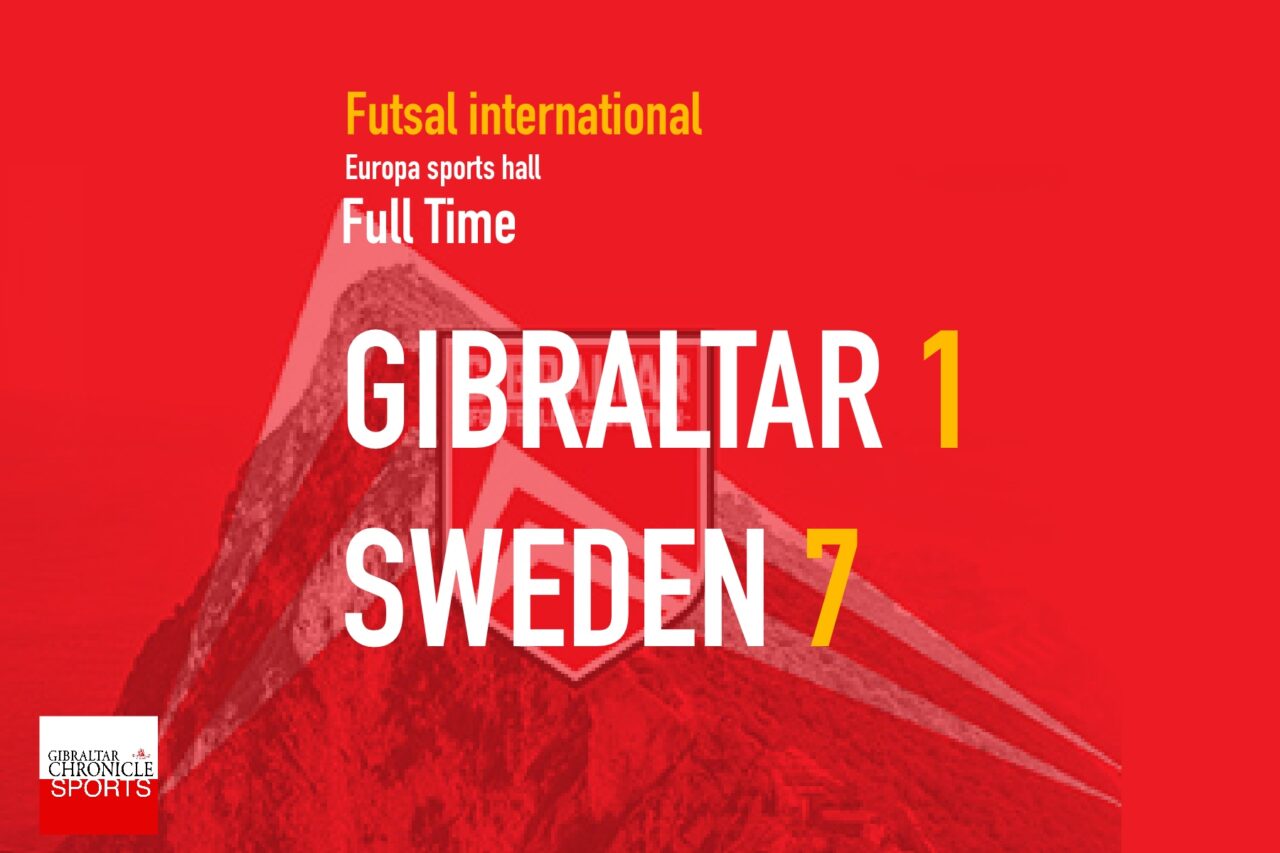