Gibraltar heads to the polls

GSLP/Liberals topped the GBC exit poll with 54.7% of the vote.
‪According to the poll the GSD held 23% and TG gathered 21.3% of their vote.
Independents Robert Vasquez and JC Pons received 0.5% each. Out of seven opposition seats 5 are expected to go to GSD with a further two for TG.
Leader of Together Gibraltar Marlene Hassan Nahon tops the opposition list in the GBC poll which saw over 700 take part.
Mrs Hassan Nahon was followed by GSD candidates Damon Bossino, Keith Azopardi, Daniel Feetham, Freddy Ballester, Roy Clinton and TG candidate Craig Sacarello.

Queues could be seen as from 9am on Thursday when voting began in earnest at the 15 polling stations across Gibraltar.
The 2019 General Election has seen 32 candidates, comprised of four parties and two independents in the running.
Today the Gibraltar electorate will decide which party with govern over the next four years.
Leader of the Liberal Party Dr Joseph Garcia cast his vote this morning at 10am encouraging the public to head to their polling stations. 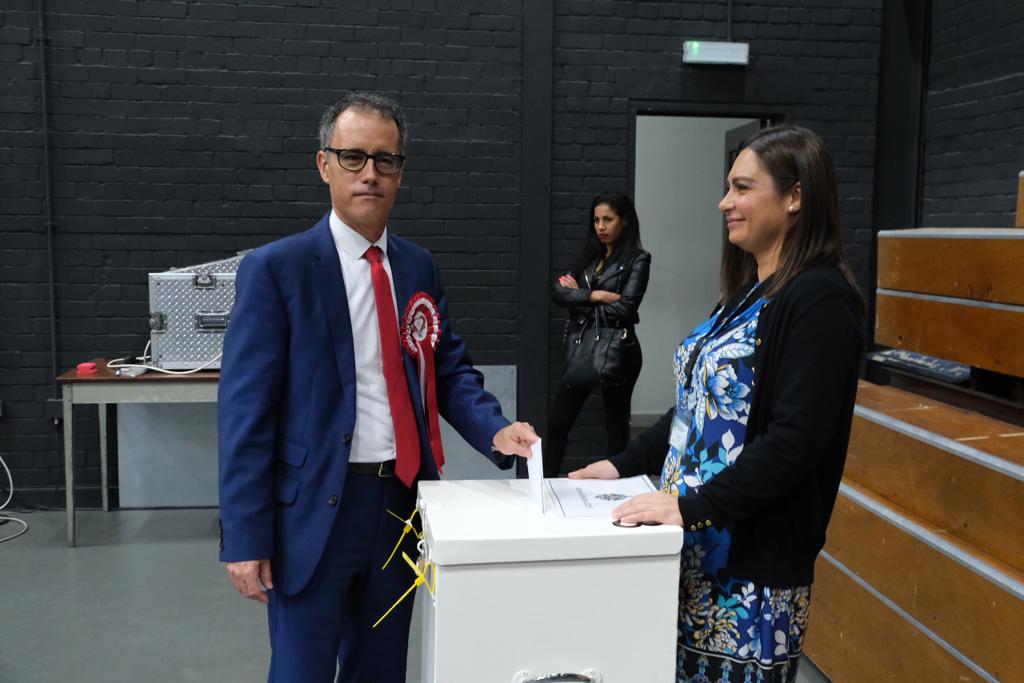 "I think this has been the cleanest campaign I have ever experienced and been involved in," said Dr Garcia.
"Full credit to all the different parties who have been participating in it. For us this is very exciting we have made the point throughout that this is the Brexit election, there are things that are outside Gibraltar that will have an important bearing on our future and the message we have delivered is that we feel we are the best people to deliver for Gibraltar going forward."
Dr Garcia encouraged people to go out and vote, starkly setting out the message that people have died to ensure future generations could vote.
"This is not something we should take for granted," Dr Garcia said.
"If you have the right to vote you should exercise it as you wish and hopefully the vote will be for us."
Brexit has seen turbulent times in UK politics with Gibraltar intertwined in complex negotiations over the past three years.
As the Rock prepares to leave the European Union on October 31, Dr Garcia said this election is "fundamental" in Gibraltar's history.
"We may now leave the European Union in the next two weeks and it is going to change the fabric of life here in Gibraltar," Dr Garcia said.

Leader of the GSLP and caretaker Chief Minister Fabian Picardo highlighted the importance of voting as he was swarmed by Gibraltarian and Spanish reporters outside the Central Hall polling station. 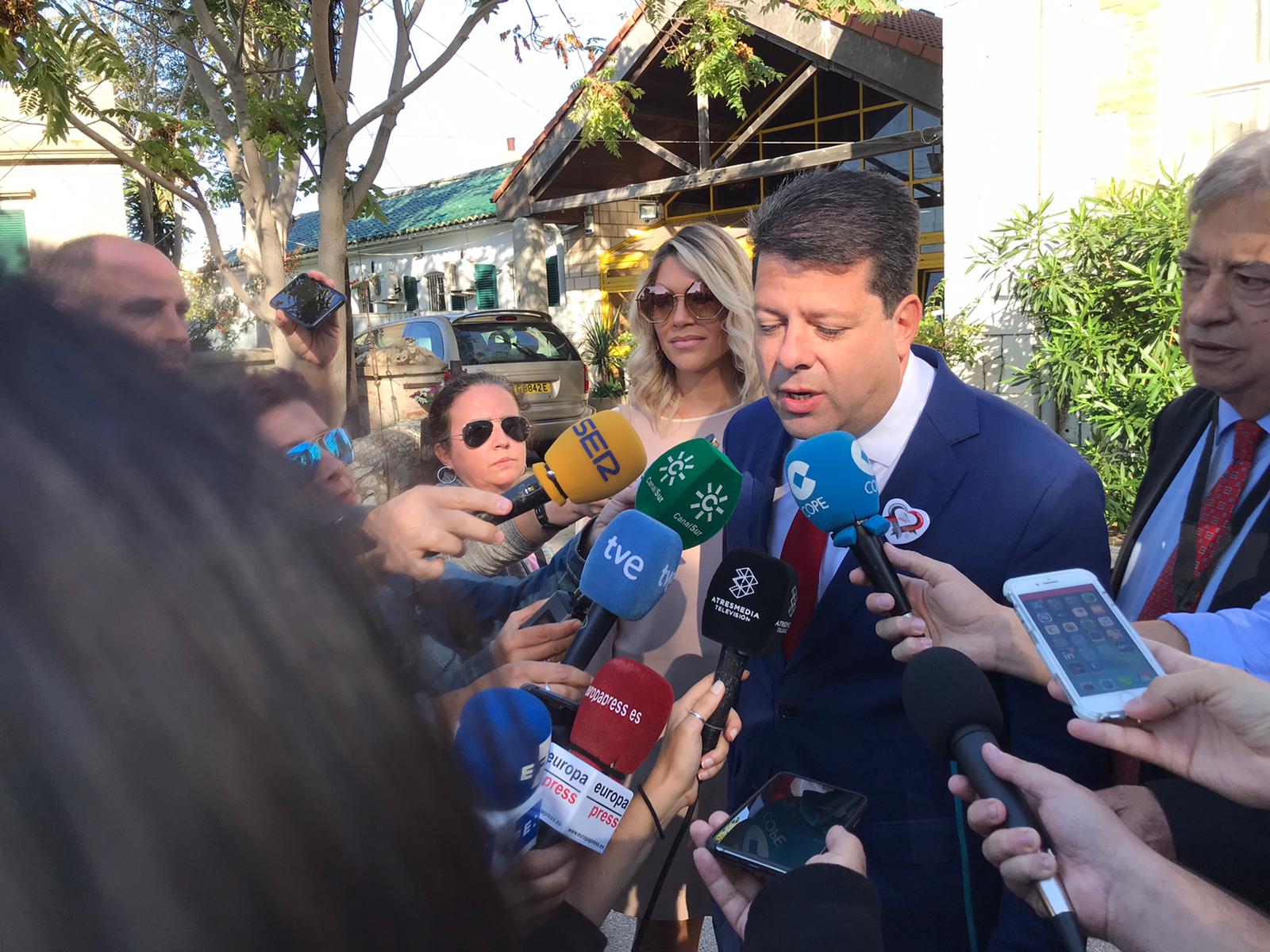 "Today is a hugely important day in the electoral cycle in Gibraltar to come out and exercise the right to vote," Mr Picarrdo told reporters.
"We don't all have the right to vote in the world, it is something people have fought for it is something we have to exercise carefully. We need to think about what is best for our families and our nation."
Although tipped by the Chronicle and Panorama poll to win this general election Mr Picardo said "the only poll that matters is the general election".
Mr Picardo added that Gibraltar now "awaits the judgement of the ballot box" and signalled this would be the last time he would stand as Leader of the GSLP.
"I have given this party my all, I have given this campaign my all and I said that I would not be the leader of this political party when my son went to comprehensive education and to make things even harder for myself and clearer I have brought the age down to when people start the comprehensive to 11 and not 12." 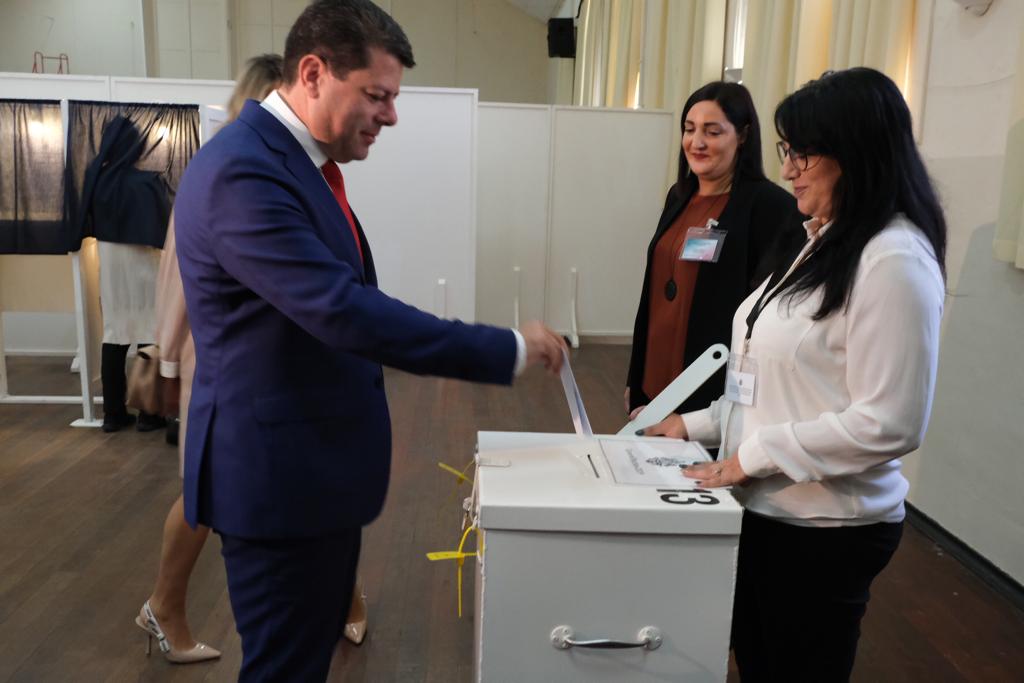 Leader of the GSD Keith Azopardi signalled "important challenges" in regards to Brexit and responded to the latest developments as he cast his vote at the Dolphin Youth Club early this afternoon.
"The dice has been cast, all things have been said and I think now it is very important for everyone to come out and vote, to exercise their democratic choice," Mr Azopardi said.
"This is not a day for campaigning so I am not going to say what the important issues in this election have been because I think people have heard everything they have got to hear from the candidates. It is time for people to exercise their right and decalre who they support in this election." 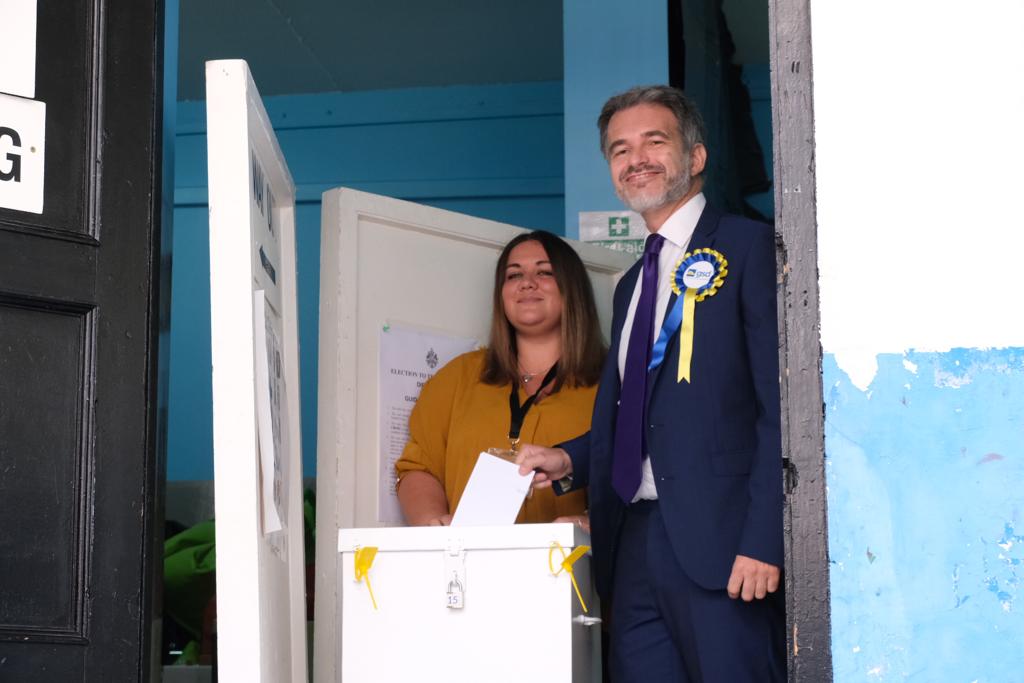 Mr Azopardi told reporters there are "important challenges" ahead in regards to Brexit and that his party is committed to help the people in Gibraltar.
In reponse to questions he underscored that although Gibraltar does not want to leave the European Union that it would be best to do so with a deal.
His comments came moments after UK Prime Minister Boris Johnson announced a new Brexit deal had been struck with the EU.
He added the uncertainty brought by Brexit could affect how the Gibraltar electorate votes today as the Rock prepares to leave the EU in just two weeks time.

For Leader of Together Gibraltar Marlene Hassan Nahon casting her vote in this general election was a first as leader of the newly formed party.
"I am really proud to be here today," Mrs Hassan Nahon said.
"I am proud to live in a free democracy where all voters can exercise their democratic rights. Today is exactly one year to the day when our movement voted to transition into a party. Something I only realised this morning and I am extremely proud of that. I am extremely proud of the slate we have that was voted in by the membership. A gender partiy slate and I am humbled and honoured to be here as a female leader and to show our community that women have a place in leadership roles in politics, representation and society." 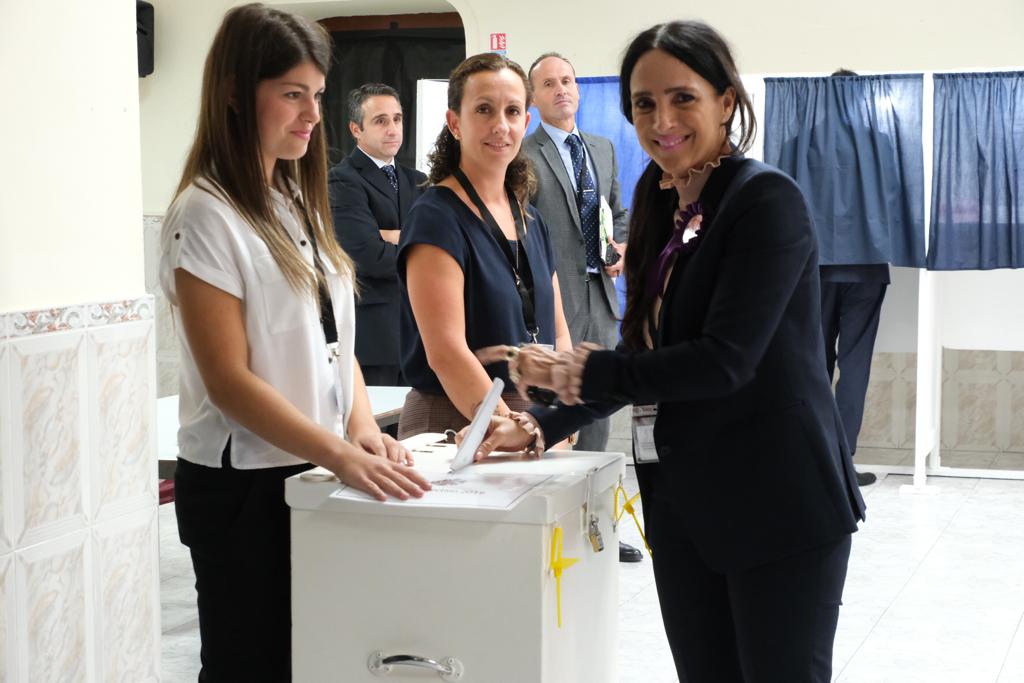 Mrs Hassan Nahon stressed that women represent 50% of society and this should be reflected in "parliament and beyond".
With a new UK Brexit deal secured Mrs Hassan Nahon said Gibraltar and the UK's departure from the EU was looking "better than the worst case at the moment".

Governor of Gibraltar Lt Gen Edward Davis visited four polling stations today.
He said it was "lovely" to see people exercising their democratic right.
"It is very important that the new government gets as many people as possible to come and vote," Lt Gen Davis. 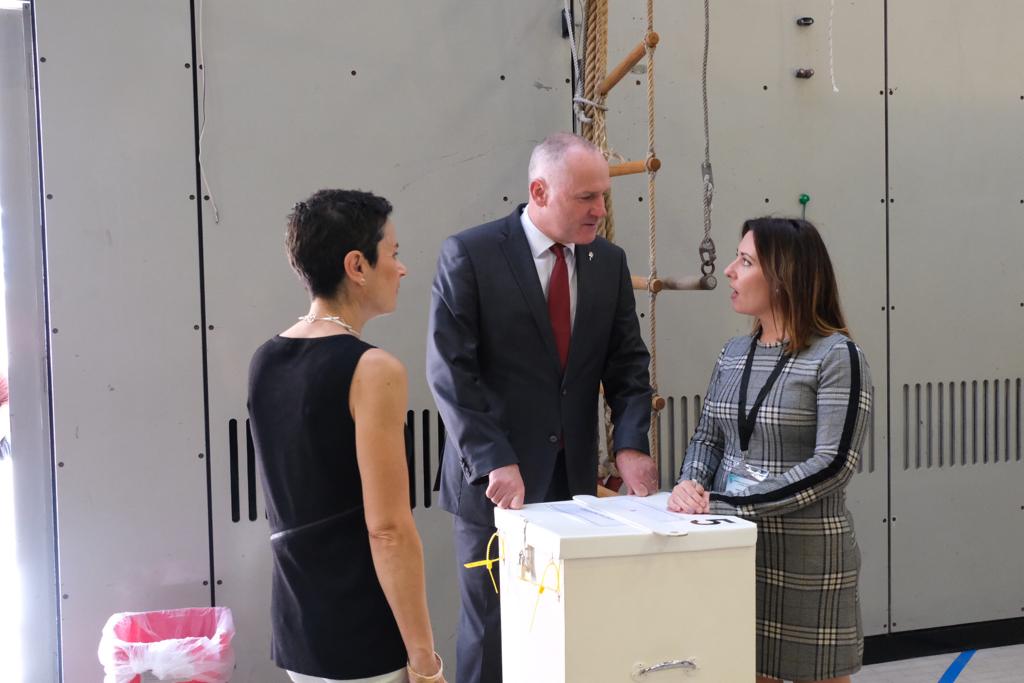 Independent candidate Robert Vasquez cast his vote today and highlight "issues" in the electoral system.
"As an independent one is up against all 10 candidates from the different parties and all the party machinery, plus on top of it with respect to GBC and the GRA a rather partial coverage of the election in terms of debates and involvement in leaders programmes which one is excluded from," Mr Vasquez said.
Mr Vasquez added he has raised further issues regarding Gibraltar's electoral system. 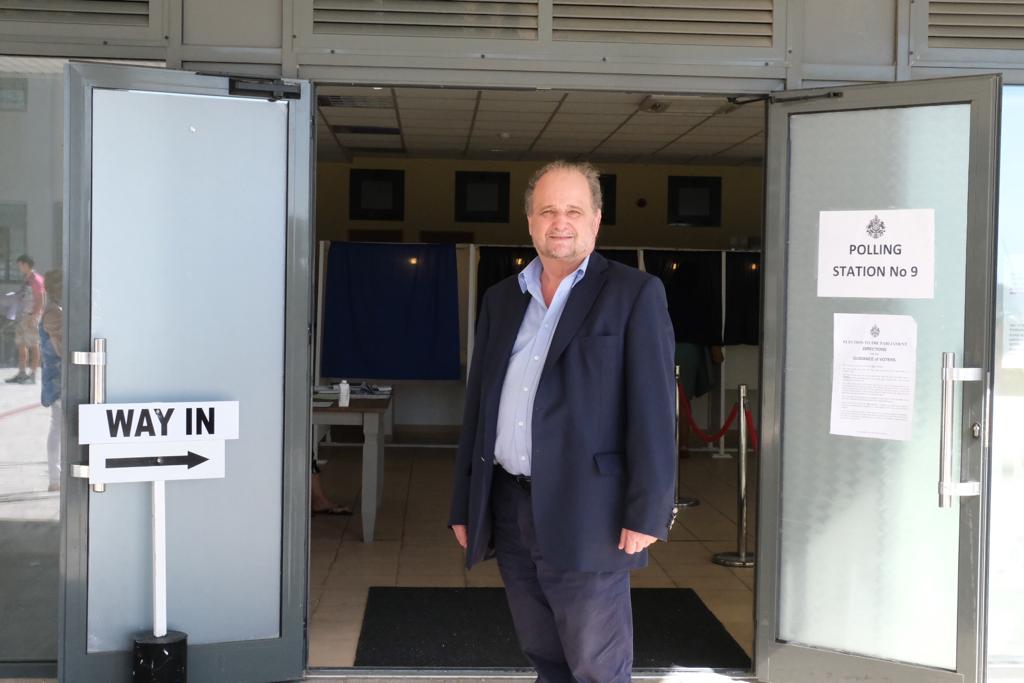 Mr Vasquez added that he feels his "stand out" moment has been his election jingle and thanked Philip Valverde for composing the piece.
In regards to the new Brexit deal, Mr Vasquez said it seemed like much of the same and that Gibraltar would have to "wait and see".