Gibraltar’s national head coach opted to start the match without the likes of Lee Casciaro and Roy Chipolina, two of Gibraltar’s iconic players but also the oldest in the squad.
With four matches in twelve days the squad was due to be rotated as Julio Ribas had suggested. The line-up for the match against North Macedonia showing that he was true to his word.
Jayce Olivero made his return after a one match suspension due to picking up a card in the previous international.
The fans did not turn up with half the seats empty. The long bank holiday ensuring many people had gone away for the weekend.
Just two minutes into the match Macedonia had a goal disallowed for offside. This a clear warning to Gibraltar that they were facing a tough opposition.
After seven minutes the visitors came close again to opening the score. A strike on goal hitting the crossbar with Coleing beaten.
Gibraltar were put under pressure from the start defending deep in their half.
Dominating possession as they were, the visitors were nevertheless being held outside the penalty box in the centre third of the field.
As the minutes ticked away the crowd were to start getting into the match as a couple balls into Reeces path saw a few tumbles which the crowd called for the official to award.
Gibraltar started to find its feet and gain confidence. On the seventeenth minute Valarino stealing a loose pass and just missing the target as he rounded the keeper.
Just moments later Torilla served a through ball which Valarino once again found himself on a darting run.
Macedonia responded emphatically. First delivering a shot which was sent to corner. Then from the corner delivering the first goal of the match with 21 minutes gone.
The goal lifted North Macedonia’s momentum with Gibraltar pushed into their half once again.
The increasing breeze sweeping across the pitch did not aid Gibraltar’s position with some treacherous swirling curls on the ball as it swept across the penalty area.
Gibraltar’s defence however, stood firm and managed to absorb the pressure for most of the first half. Jayce Olivero alongside Bernardo Lope on the left closing down well whilst Wiseman and Jolley combined in the right side. The defensive side of the midfield providing support.
The visitors were applauded at one point after Valarino received a ball in the face as they were making headway for a cross into the penalty area. The Macedonia player stopping in his track and instead calling for the player to be seen to.
Coleing was to produce a great save, punching the ball over the bar for a corner as Macedonia again found space to send a shot in from the sides.
The only time Gibraltar had reached the other side for sometime was a long throw by Wiseman that ended up with a flicked back header into the hands of the Macedonia keeper.
The final minutes of the first half Gibraltar closed up at the back further securing they went into the halftime break just the one goal behind. A muted crowd telling its own story on the stands.
The match had not seen any repeat of the critical chants against Gibraltar’s head coach.
With just three minutes into the second half Reece was beaten to a long ball into the centre of the penalty area by Macedonia keeper but the Gibraltar forward colliding with the keeper accidentally as he went for the ball. This was Gibraltar’s first chance for a while which sparked the chants on the stands momentarily.
Macedonia continued to control possession and stamped their authority on the pitch.
Gibraltar tried to break free from deep five minutes later with a long throw from Coleing releasing Torrilla down the right. His cross deep into Macedonia’s penalty area comfortably collected by the keeper.
Pressing high Gibraltar gained some ground as Walker collected and tried send Jolley through.
Gibraltar them finding themselves in possession again and pushing Macedonia back into their half.
With 60 minutes gone a free kick from Liam Walker came close to a goal as it was flicked to back post. The keeper turning around for a corner before Macedonia were able to regain possession.
The initial surge forward by Gibraltar in the first fifteen minutes of the second half unsettled Macedonia. Valarino’s darting runs supported by Jolley, Torrilla and Walker pushing Macedonia deeper into their half.
Jamie Coombes was to come on for Gibraltar replacing Reece as the hosts saw their confidence in attack rise.
Gibraltar venturing forward and finding their quick paced players causing Macedonia’s defence some concern.
Gibraltar seemed to fall back into their regimental pattern which saw them more rigid and defensive after just a short spell. Losing their offensive momentum even though the visitors had not shown much of a threat in the second half.
With seventy- seven minutes gone Julian Valarino was replaced by Lee Casciaro.
Frustrations seemed to increase within Macedonia as they struggled to find their first half dominance. Gibraltar again returning to pressing very high and sending the visitors deeper into their half.
Although the goal opportunities did not open for Gibraltar the visitors found it difficult to break to goal. Once again though, with eighty three minutes gone a defensive lapse allowed Gibraltar’s opponents to score. The goal momentarily breaking Gibraltar’s rhythm.
Pozo was to get his debut with four minutes left on the clock replacing Liam Walker.
The youngsters first touch seeing him get past his markers and trying to put a cross into the middle just seeing the ball creep out for a goal kick.
Gibraltar held on going away with a narrow 0-2 defeat against a side which many had expected could have caused more damage. 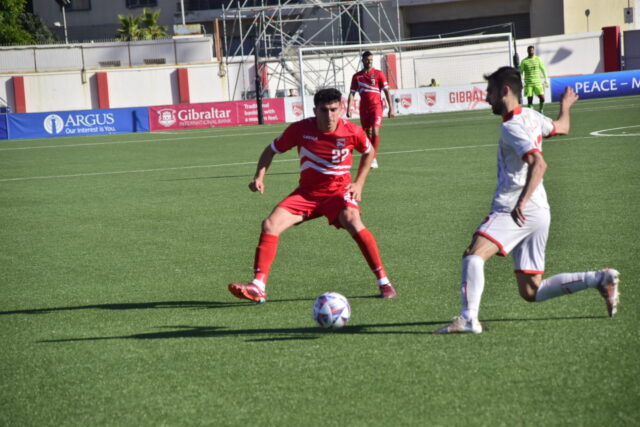 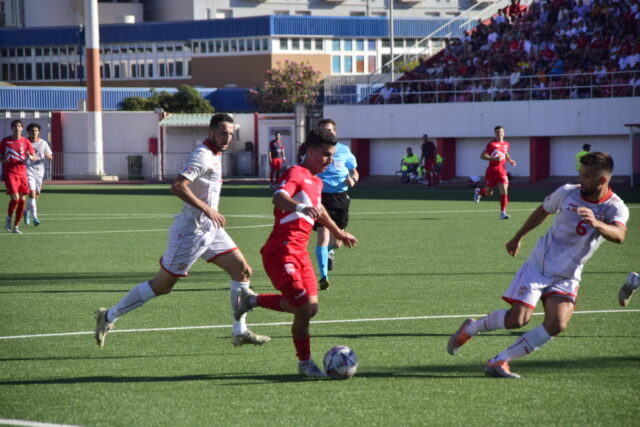 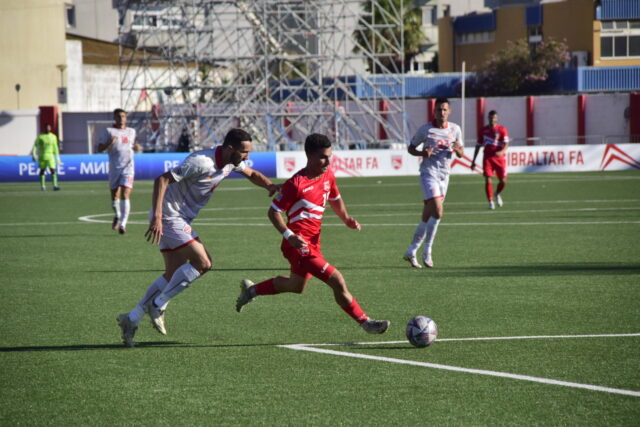 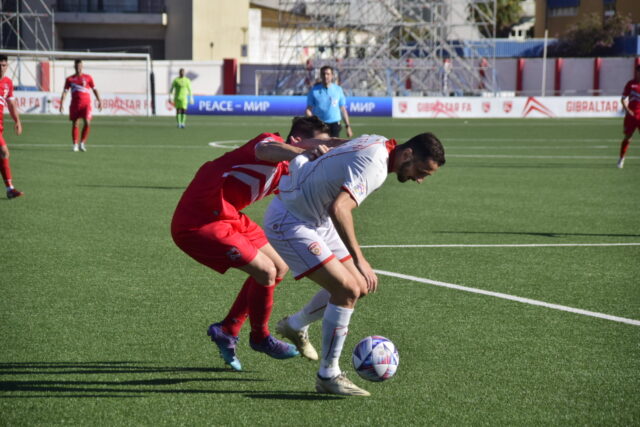 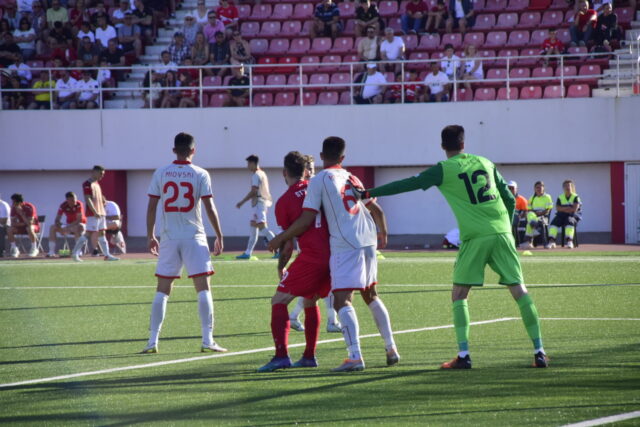 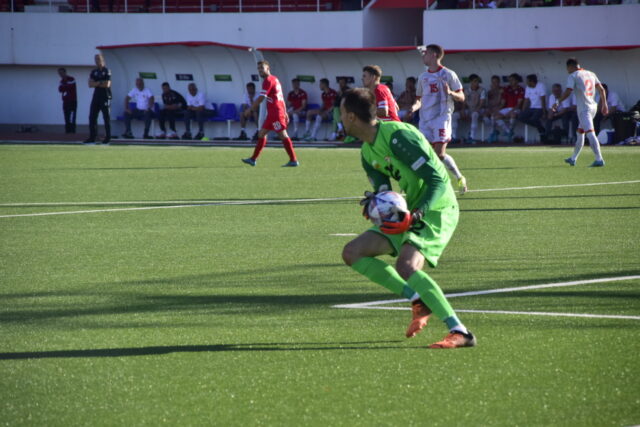 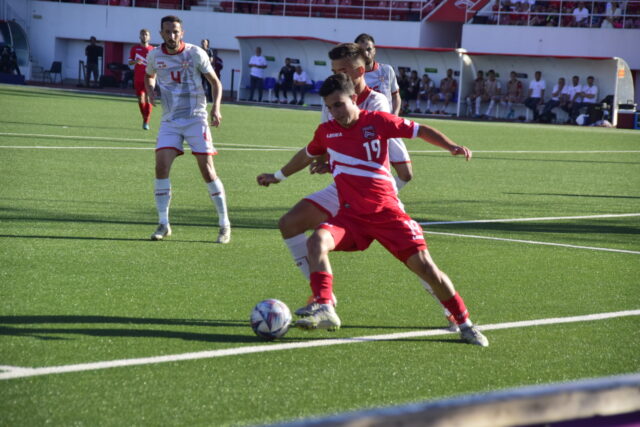 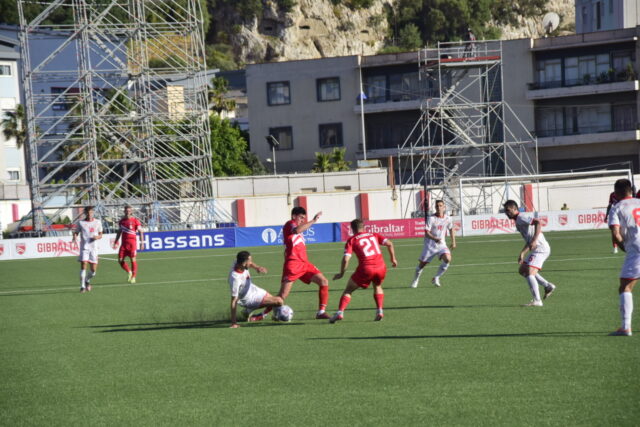 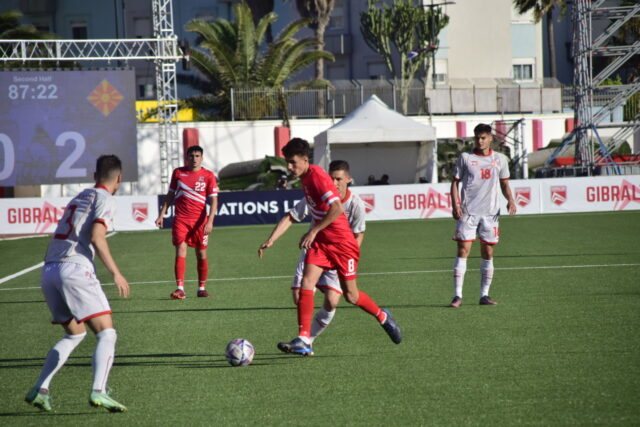 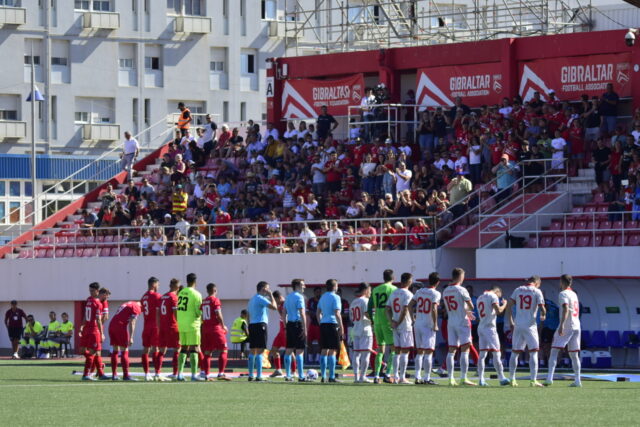 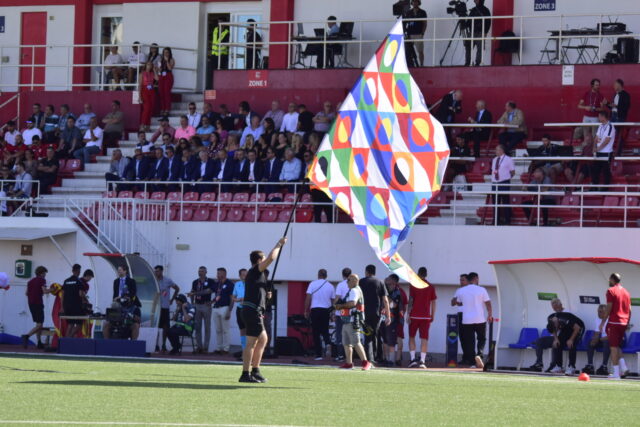 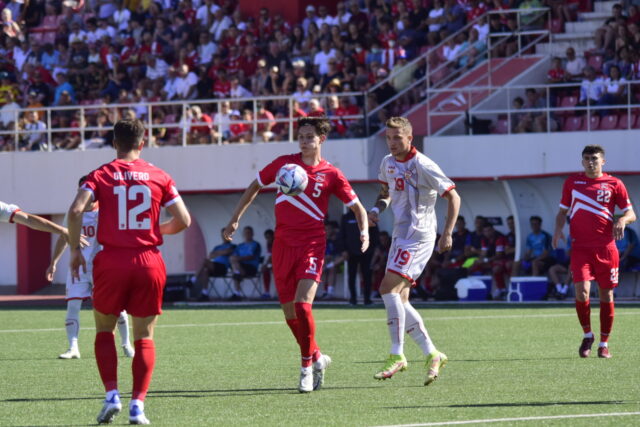 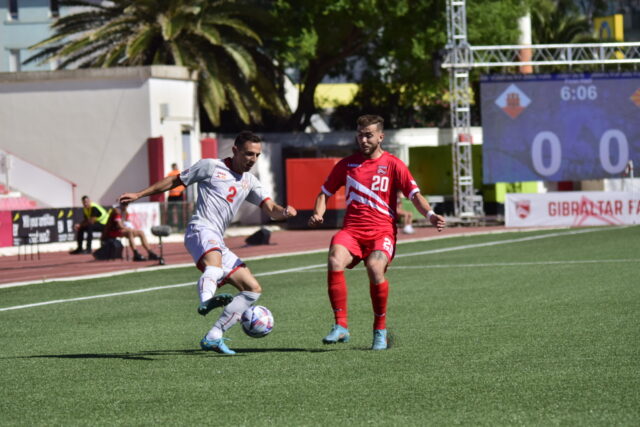 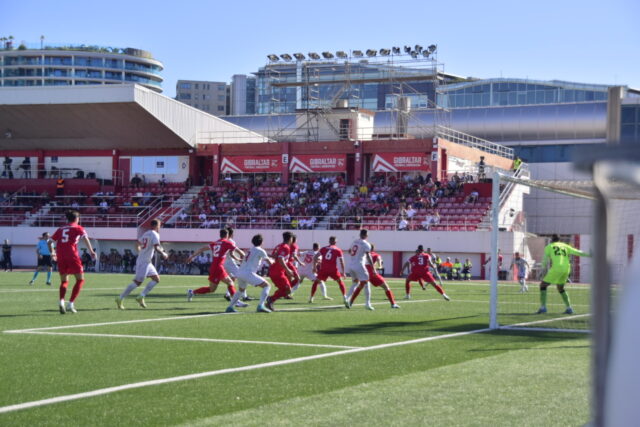 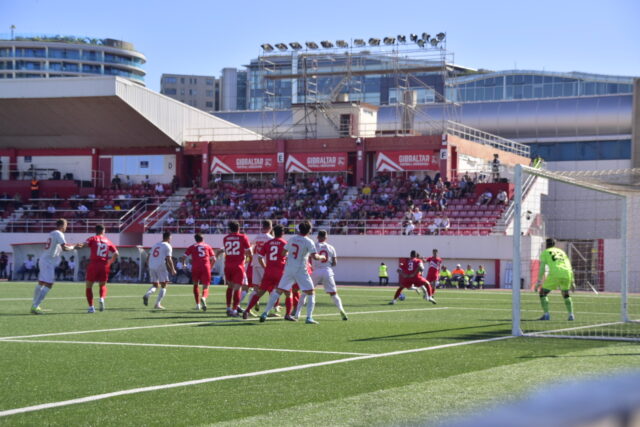 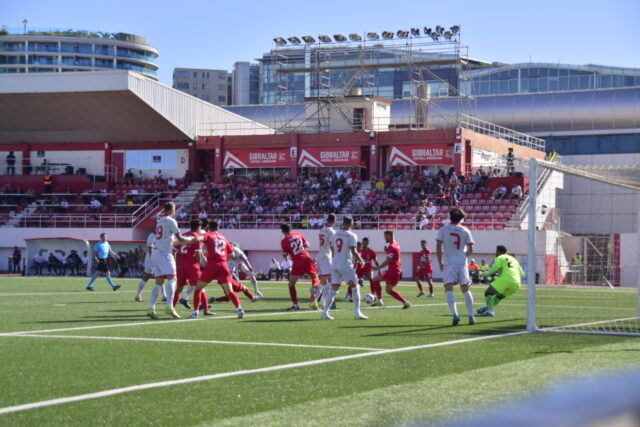 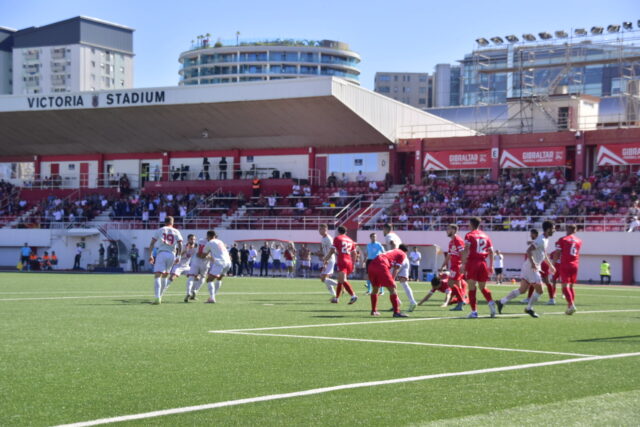 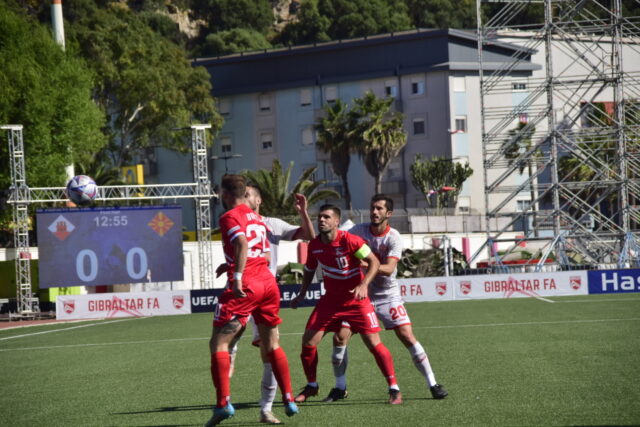 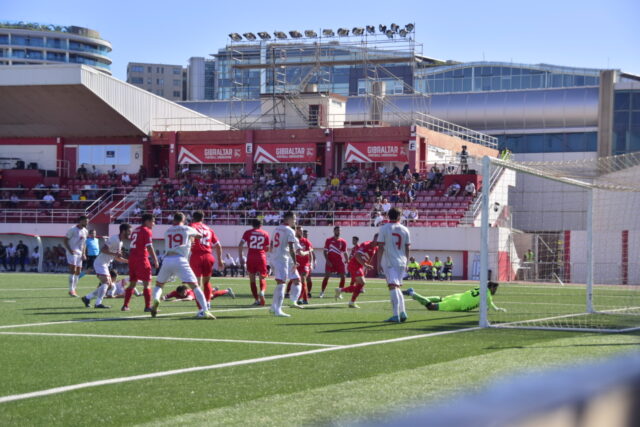 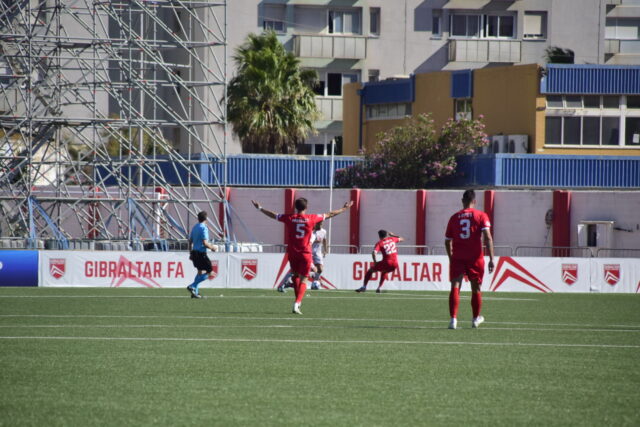 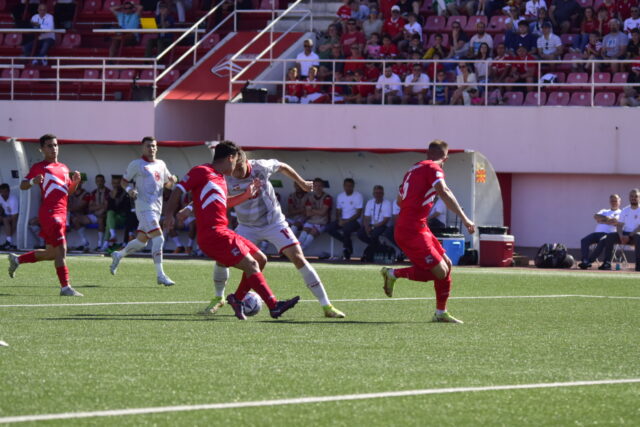 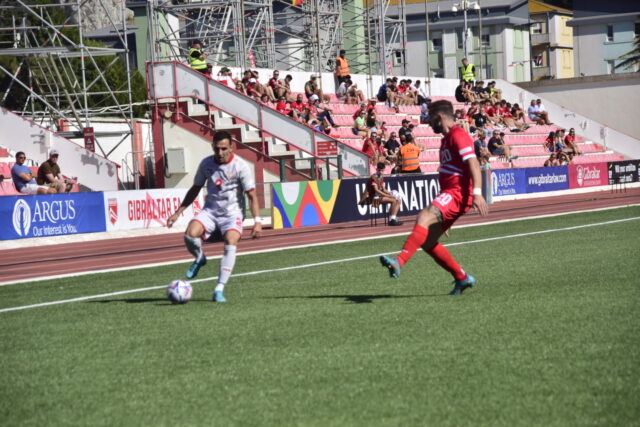 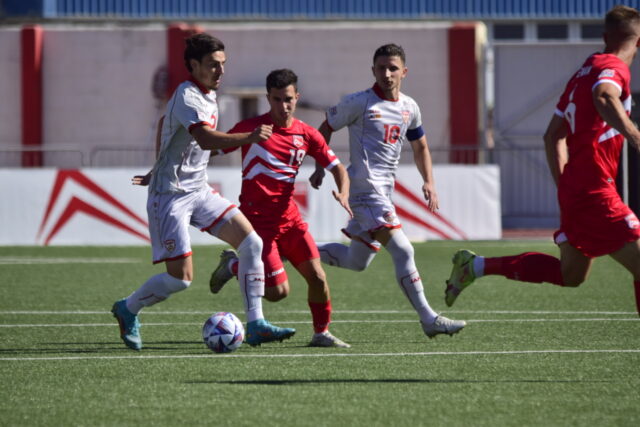 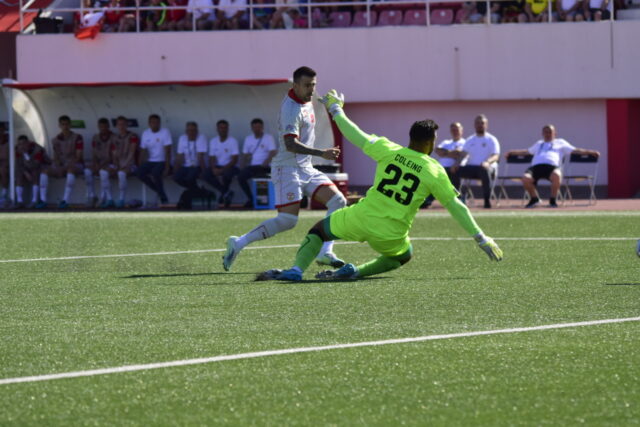 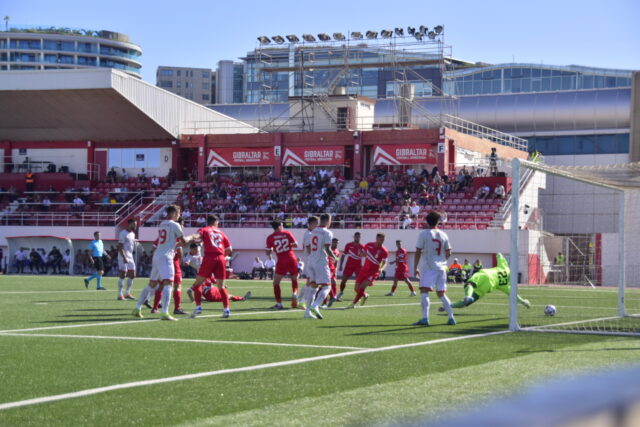 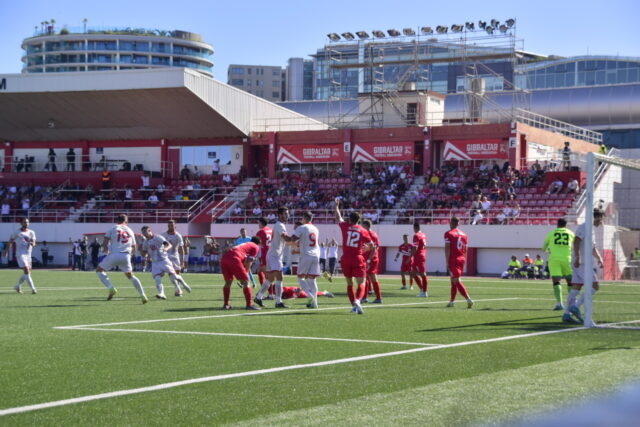 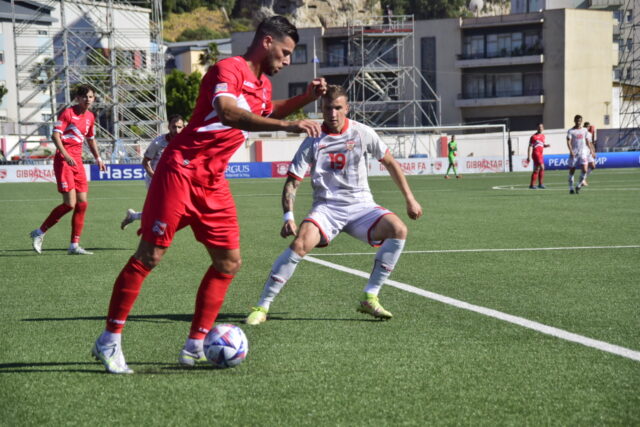 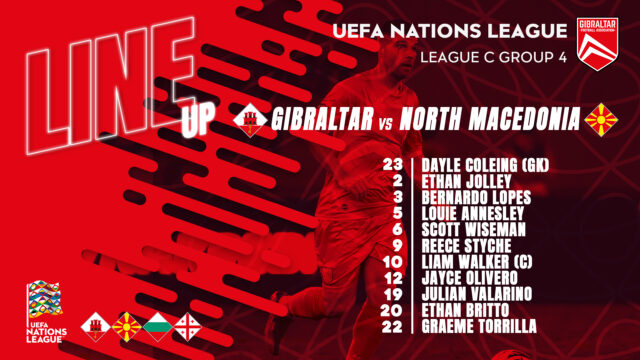