Gibraltar started feisty with two turnovers in the first minutes and taking the lead early with three points before Switzerland could respond.
A fast paced start with quick passing from the Gibraltar side saw Gibraltar drive forward increasing their points gap to 6-1 before Switzerland had another chance to score.
Switzerland were defending deep with the nerves showing on both sides in the early minutes. Switzerland struggled for their third with good pressure from Gibraltar’s defence. The visitors closed the gap to 6-4 before Gibraltar added to their tally.
A beautifully played triangle put them on 8-4 and soon after 9-4.
A loud crowd ensuring that the ambience was there with both defence and attackers on top form from the start as Gibraltar powered ahead to 12-4 lead with six minutes of the first quarter still left to play.
Switzerland found the net for their fifth only to find themselves immediately conceding through a well threaded pass that opened the space for shooters.
The Swiss long balls were not effective as Gibraltar kept it man on man play and quick short passing as they sped ahead to an 18-6 lead. With the crowd cheering them on Gibraltar finished the first quarter leading 22-6 against Switzerland.
Switzerland struggled against the electric pace of Gibraltar who came into the first match after a defeat against Northern Ireland the previous day. Joelle Moreno having commented on social media before the match that the team had learnt from mistakes and had not executed as they had hoped against Northern Ireland.
Although half empty the stands a crowd of school children for the early morning match made the Tercentenary Sports Hall an electric environment for Gibraltar’s first match in the official tournament.
Switzerland came out with greater determination shortening their passing and trying to create a path past Gibraltar’s defence.
Gibraltar were the first to score with the Swiss immediately responding. Some nice movement from Gibraltar from defence to attack saw ball fed for Megan Martinez to fire it in. The Gibraltar shooters and attackers very much on point as they went to 27-7.
Gibraltar’s experienced players called on their players to slow down after several lost passes as Gibraltar’s excitement of being in a comfortable lead saw them momentarily losing focus.
Settling down Gibraltar responded by adding to their tally going 30-7 ahead.
Some swift well placed movement from Megan and Amy allowed Joelle to choose a pass to find the 32nd point as Switzerland struggled to defend.
Switzerland were not to score until there was six minutes left on the clock for half time as they saw Gibraltar running away with the game.
The combination of Hernandez and Moreno through the middle feeding passes through effectively. Gibraltar’s defence solid at the back whilst the frontline were showing how sharp and ready they were to try and lead Gibraltar to the title.
Gibraltar were flying away with the match with 39-8 lead at halftime against Switzerland who had only scored two points in the second quarter.
A half time talk from Dennis Ellis with changes saw Gibraltar bring on players such as Mcquisten at the back for Rovengo and Courtney up front. Also coming on Chloe Hernandez another youngster coming up from the under 21s.
The Swiss were to score first but just as quick Pozo added the next for Gibraltar.
Defensive work upfront by Courtney set Gibraltar to regain possession as Gibraltar went to a 41-9 lead. Courtney adding the 42 with her now well known calmness under the basket.
Soon Gibraltar were 45-9 ahead as Gibraltar’s shooter settled after the changes. Winning rebounds, and working swiftly inside the circle Gibraltar went to a 48-9 before Switzerland responded.
Courtney Ferrers devastating efficiency under the basket started to emerge as Gibraltar went to a 51-10 lead with four minutes of the third quarter left. Pozo matching her.
Gibraltar’s defensive changes had not weakened them to Switzerland’s frustration as Mcquisten and Zainya combined just as effectively as Bryony Rovengo had in the first two quarters.
The strength in depth across the Gibraltar netball squad displayed as they took the third quarter to a 59-10 lead.
With Gibraltar a third match in 24 hours head coach Sarah Payas had an option for the fourth quarter to make further changes with such a comfortable lead.
Robba, Ruiz and Truman-Davies came on for Gibraltar with players such as Rovengo, Moreno, Pozo, Martinez, Ferrer rested. The Gibraltar team on court among one of the youngest fielded with all except for Gillingwater and Anna Hernandez having only recently stepped up from the under 21 ranks.
The changes made little change to the momentum as Gibraltar kept adding to their tally going 67-11 up with ten minutes left on the clock.
With the Swiss also making wide changes across the court the fourth quarter was a chance for international experience for many players. For the Swiss it was a chance to getting under their belt a more
positive finish than previous quarters.
Switzerland were able to build on their points to take them to 15. Gibraltar added their next point through some nice movement off ball creating space for the 68.
Gibraltar went on to surpass Northern Ireland’s score against them winning 74-18.
The physical conditioning the players had undergone during the past months under the guidance of Sarah Payas had paid off as they found the high energy just twelve hours after playing Northern Ireland.
Gibraltar will now have to find the same energy to take on the United Arab Emirates this evening at 6pm to maintain their momentum towards their title bid. 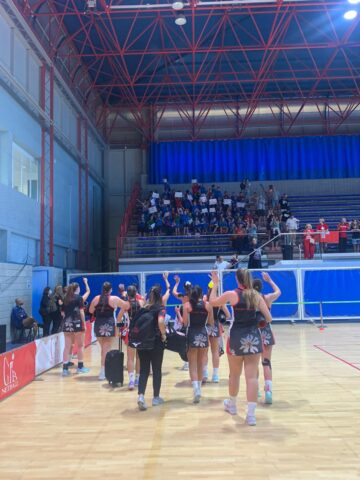 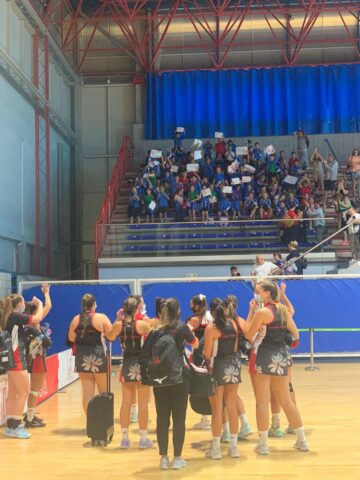 Players celebrated their victory with pupils from St Joseph’s school who watched the matched.