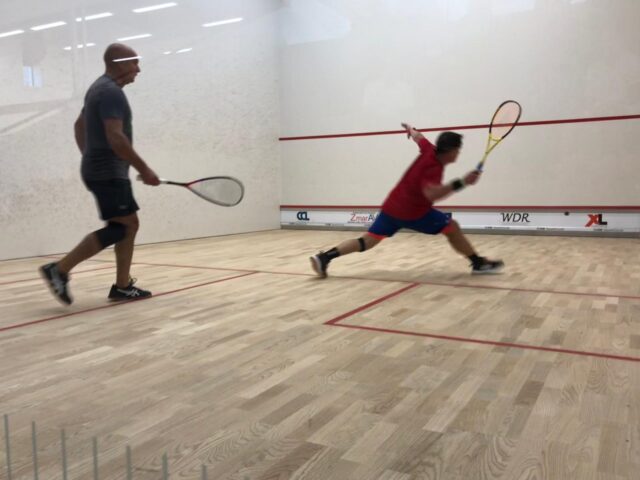 The Glenn Pearce Trophy is awarded to the winner of the Open classification. With bookies’ favourite, Ivan Flores, isolating as a close contact, the competition to claim this year’s crown was keen. However, with Christian Navas still in the tournament, it was going to be a tough challenge for anyone to beat him to the trophy. Christian eased his way to the final, only dropping a single game to Noiky Roberts en route. In the other half of the draw, Mark Tewkesbury had a harder path to the final with Chris Dunckley (3-2) and Carl Gomez (3-1) both putting up a fight. 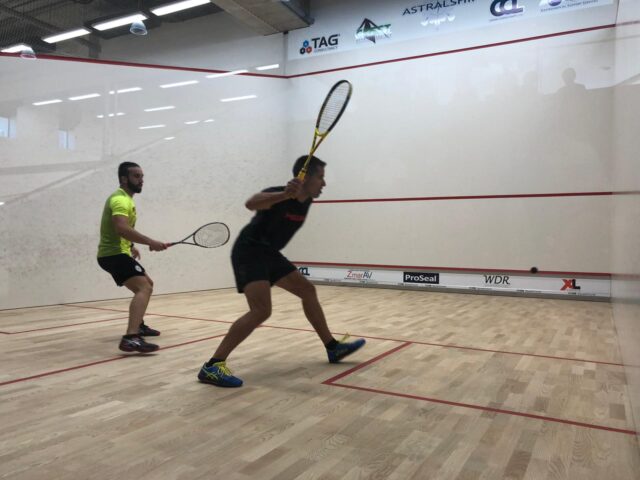 The final was characterised with big rallies - both players well known for their fitness and ability to return balls that others would have given up on! The first game was particularly well fought with Christian Navas beating Mark Tewkesbury (11-7). With the first game under his belt, Navas kept his foot to the accelerator and closed the game out 11-7 11-5, 11-4.

The Heather Duez trophy, sponsored by Astralship, is awarded to the winner of the Ladies’ competition, with two-time champion Jessica Gomez defending her crown. Gomez made her way safely to the final without dropping a game. On the other side of the draw, returning player Mel Camilleri-Bland had to battle Leanne Moreno for the other place in the final, with Camilleri-Bland winning a closely fought game 11-7, 7-11, 11-9, 11-9.

The Ladies’ final saw two contrasting styles of play with Mel Camilleri-Bland playing precise and considered squash, keeping the balls close to the walls, compared to the big serve, hard-hitting and sheer determination of Jessica Gomez. The precise play of Camilleri-Bland ensured that she took the first two games in tightly contested battles (11-7, 11-9). The third game saw a sharp turnaround in Gomez’s fortunes, dominating the game to win 11-1. The fourth game was going to be critical with Camilleri-Bland suffering a foot injury, but Gomez managed to beat her 11-8 to level the scoreboards 2-2. Gomez was now in her stride and comfortably took the final game 11-3, winning her 3rd title 7-11, 9,11, 11-1, 11-8, 11-3.

The Veterans’ competition, sponsored by Astralship, saw some of the closest games, including the longest match between Justin Chipolina and Darren Torres (43 min, 3-2). The top half of the draw was again dominated by Christian Navas, who only dropped a single game to Gino de Haro on his way to the final. The second half of the draw saw Colin Davis progress to the final after beating Chris Dunckley in the semi-final 3-1. Navas continued his strong performance with a convincing win in the final 11-2, 11-9, 11-7, adding the Astralship Veterans title to his haul!

The Vintage competition, sponsored by Crest Rope Access, also saw some excellent squash. In the top half of the draw, Colin Davis eased to the final without dropping a game, whilst Justin Chipolina and Joerg Becke had a thrilling semi-final. Despite Chipolina chasing down every shot, Becke won the tight games and progressed to the final (12-10, 12-10, 6-11, 11-8). This set up a battle between Davis and Becke. Becke played some excellent squash throughout and was able to counter Davis’s style effectively, winning the first game 11-4. A determined Davis tried to recover in the second game, but Becke’s ability to win the close games came through again to take the second game 12-10. Becke then finished the game off in the third to take the Crest Rope Access Vintage competition 11-4, 12-10, 11-1.