Gibraltar 'warmly and loyally' congratulates the Queen on her Platinum Jubilee

A Royal Gun Salute was fired by the Royal Gibraltar Regiment on Monday to mark the 70th Anniversary of the Accession to the Throne of Her Majesty Queen Elizabeth II.

Members of the public gathered to watch the salute at Grand Battery House.

The Inspecting Officer, Mayor Christian Santos, was hosted by the Regiment's Battalion Second-in-Command, Major Timothy Cummings, and Gun Position Officer Captain Richard Dagger, with the Officers and Warrant Officers of the Regiment joining at Grand Battery House to mark the occasion. 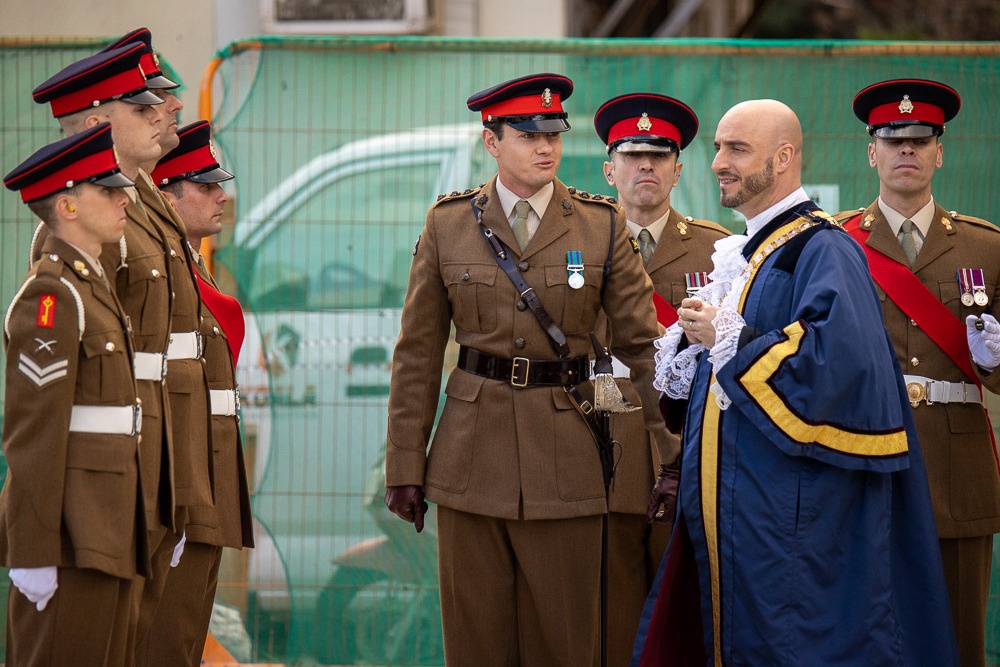 On Sunday, the Government of Gibraltar extended its “warmest and most loyal congratulations” to the Her Majesty the Queen on the occasion of the celebration of her Platinum Jubilee, describing it as an “outstanding and historic, record breaking, achievement”.

Many people in Gibraltar still remember well the ascension of a very young Princess Elizabeth to the throne of the United Kingdom after the sudden death of her father, King George VI.

Upon her coronation, Queen Elizabeth II embarked on a world tour of the Commonwealth countries, including Gibraltar.

“For the Gibraltarians, the presence of the Queen and Prince Phillip on the Rock provided a special opportunity to show the deep, enduring and unwavering loyalty and appreciation of the Rock’s inhabitants,” No.6 Convent Place said.

“The visit was immensely successful and has remained in the collective minds of the Gibraltarians.”

No.6 said the Queen’s unprecedented commitment to the Crown and its role in British Parliamentary democracy has proved to be a shining example of stability and good government to the world.

The Chief Minister said: “The Queen has been, throughout her life, an example to us all.”

“Her presence as Queen of Gibraltar is felt keenly by all who are fortunate to live here.”

“She has been our rock and stay over 70 years and remains in our hearts always.”

“As an indication of the vast sweep of her reign, Her Majesty has been on the throne through the tenure of every Chief Minister of Gibraltar to date since the first appointment of Sir Joshua Hassan.”

“Gibraltar is proud to have been a small part of the great British family of Nations led by Her Majesty.”

“We are all united in wishing her good health and happiness in the years to come.”

The statement from No.6 Convent Place also included a message from the Governor, Vice Admiral Sir David Steel.

“Over the course of such a long reign, the longest of any British Monarch, she has served the people of the United Kingdom and the Commonwealth with a commitment that is an example to us all,” Sir David said.

“There can be no greater privilege than serving a monarch who has devoted her life to the service of others, over such a long period of time.”

“I know that she cares for Gibraltar and its people deeply and reflects often on the very happy time when she and Prince Philip visited in 1954.”

“Gibraltar will, I am sure, be in Her mind today, as will be all the people of the Commonwealth”.

To mark the occasion, the Union Jack flew the Moorish Castle throughout Sunday.