The Governor Vice Admiral Sir David Steel accompanied by the Deputy Chief Minister Dr Joseph Garcia was shown around the Northern Defences for the first time on Tuesday.

Showing the two men around was the Project Director Carl Viagas.

This impressive array of fortifications protected Gibraltar for centuries against a land attack from the north. Hundreds of tonnes of rubble and rubbish has been removed already to expose new defensive features which had been hidden or buried for decades. Previously a new defensive wall, Hanover Line (or El Muro de San Jose) was unearthed and that this dates back to 1627.

“A more recent find was the base of the Round Tower, which was the only part of the defensive network that fell to the enemy in 1705 and was subsequently retaken,” said a Government statement.

“The Governor and the Deputy Chief Minister were also able to observe the latest new find. A new line of defences, a gallery, has been exposed near Forbes Battery as a result of the clearing works. This gallery is shaped in the form of an amphitheatre from where it derives its name. In fact, it does not appear listed as until recently it was totally concealed.” 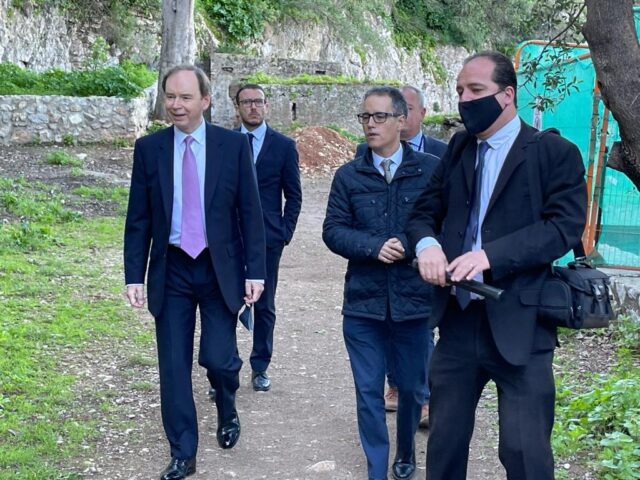 “Amphitheatre Gallery was constructed in 1789, its position offers a commanding view over the lower defensive lines from which it was possible to provide fire support to any retreating forces. This latest find would have been a formidable obstacle to any attacking troops in the event that the lower defensive positions were breached.”

Its location on hill mean tthat approaching attackers would have faced a whole line of infantry armed with muskets whilst at a choke point unable to advance, turn left or right.

“I am delighted with this latest find and to be able to share it with the Governor,” said Dr Garcia.

“It was a real pleasure to welcome him to the Northern Defences and to be able to experience the continuing progress with this world class set of fortifications.”

“The work that Carl has led so ably over the last few years is now starting to pay dividends with new finds of historical importance. It is remarkable how layer after layer of military ingenuity is being uncovered within such an area.”

“The approach of the Government in this area has the dual advantage of exposing both a historical site and a leisure area in the centre of town,” he added.