Isserlis and Shih Return to Convent

CLASSICAL Review with C.Wall
Three Springs after their memorable debut in the Convent Ballroom, the unmistakable cellist Steven Isserlis returned with established duettist Connie Shih for a Philharmonic Society recital that felt immune from world events. The evening opened just as it did in 2019: Beethoven’s Op. 66 variations on “Eine Madchen Oder Weibchen” from Mozart’s Die Zauberflöte, this time interpreted differently.

Shih commanded her piano's physical realm with a feathery grace, establishing a serious tone through the more comical opening variations, and a lively expressionism towards the more contemplative end. Isserlis relished in a rich vibrato from the diabolical second variation, and found a rich lyricism in the later minor keys. 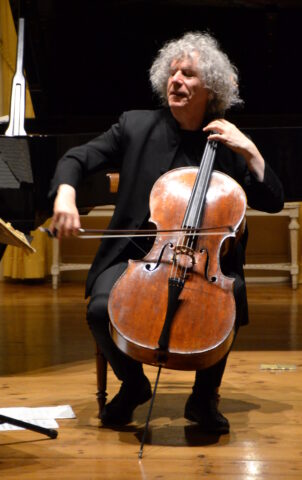 The flavour changed for Beethoven’s Op. 102 No. 2, his Sonata No. 5 in D major, practically the sound of a different composer. The opening Allegro was harmonically adventurous, swinging across moods before reluctantly giving up a melody.

Isserlis is a natural storyteller, and shared with the audience an oft-told anecdote about his grandfather’s inability, as a musician, to rent a Vienna apartment a century ago because the aged owners, another century earlier, had suffered a bad experience from Beethoven's tenancy. This served to introduce the Ballade in A minor by Julius Isserlis, originally dedicated to the legendary Spanish cellist Pablo Casals. Shih’s mournful opening was followed by swooning romantic sweeps and dancelike rhythms, before the cello flourish and a dashing piano finale. It brimmed with the late Romanticism of a Soviet exile, a delightful performance piece that shouldn’t need championing by the composer’s descendants.

That other Soviet exile, Rachmaninov, closed the programme with his Sonata in G minor, Op. 19. True to the composer’s intent, it drew out the tender intensity of the cello alongside the virtuosity of the piano. Shih introduced most of the themes in a stately opening, raising the pianissimo with the tempi of the second movement, and providing a beatific calm in the Andante. Isserlis offered an organic response to the pianist, darkening the deeper passages without overplaying the emotiveness. The finale was melodious, perhaps a little dry.

Having earned a standing ovation, the performers marked the recent centenary of Saint-Saëns with the encore of a tragic Swan — from the otherwise humorous "Carnaval des animaux" — that distilled pathos into a few beautiful minutes.