Local artist Karl Ullger will be auctioning a piece inspired by the war on Ukraine this week.

The painting is of a pink haired girl, Polina, aged 10, who was killed when fleeing Kyiv during the early stages of the invasion.

The painting of Polina will be displayed this week, until Saturday, at the Trends flagship shop in Main Street.

“The painting is based on a photo that took front pages around the world emphasising Polina as the first child victim of the war to be identified,” Mr Ullger said.

“The photo of this happy young girl with a whole future ahead of her cut short because of egos, power hunger and politics.”

“I felt the painting is a representation of all those children that may, are and will be affected during these dark times.”

“This could very easily be ‘one of ours’ and for this reason I would like to appeal to the public to help raise money for those children and families that will need this extra assistance one way or another to rebuild their lives and survive this war. Whether being for food, medicine, clothes etc.” 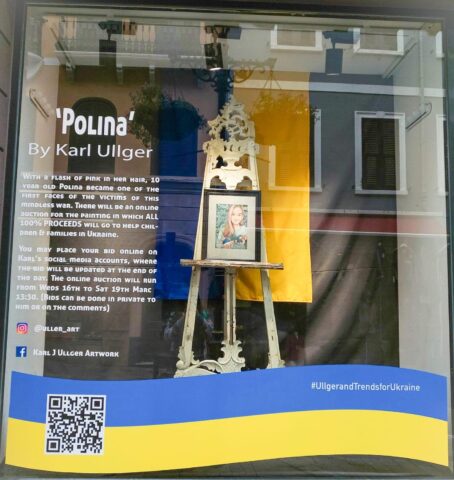 Mr Ullger decided to paint Polina after hearing the news on the war, and he wanted to pay homage to the families and children lost.

“It’s been roughly three weeks now since the war on Ukraine began and the death toll and destruction has just continued to rise,” Mr Ullger said.

“Watching the news day in, day out and the effects this has been having on so many families, I feel that we as fellow human beings can also do that bit more to help.”

“With only a couple days into the war, the news broadcast another set of victims when a young boy aged 5 died in hospital days after his sister Polina (aged 10) and parents were shot dead by Russian troops while in their car trying to leave their home town Kyiv.”

“Leaving 13 year old Sofia in critical condition in hospital unaware that her whole family have been lost. This is exactly the reason why I felt I wanted to auction a painting linked to the war. Paying homage to so many of those children and families.”

“Having a young daughter myself this story very much hit me and made me think of not only the way in which Polina may have suffered but also about her 13 year old sister’s immediate future.” 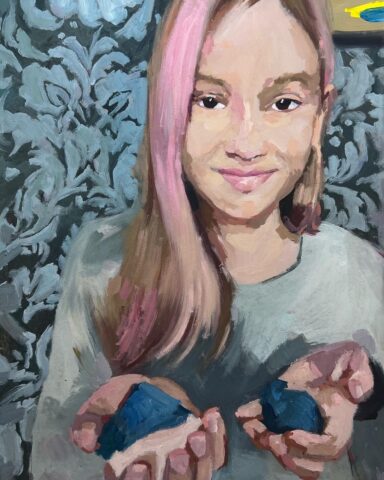 Mr Ullger also thanked Bhisham from Trends Gibraltar for helping create more awareness and opportunity for the painting to raise more money by having it displayed in one of their shop windows for the duration of the auction.

The auction will end on Saturday, March 19 at 1.30pm, and the minimum starting bid is £150. All 100% proceeds will be going to the Ukrainian Red Cross.

The display gives people a chance view the work in person and the QR code on the Trends shop window will guide the user to Mr Ullger’s social pages.

Bids can be made privately to Mr Ullger or via social media accounts:
Instagram: @ullger_art
Facebook: Karl J Ullger Artworks