Over 120 people marched in solidarity with the global Black Lives Matter movement and knelt during a minute’s silence in John Mackintosh Square last Saturday. 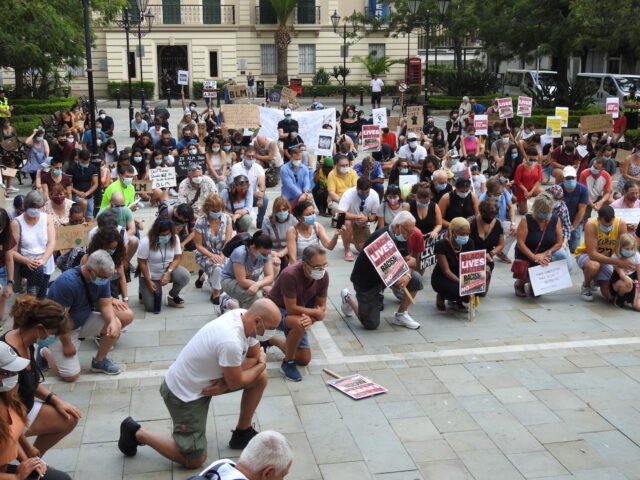 The march was organised by Mark Montegriffo on a day when other cities and countries were holding similar events in reaction to the death of George Floyd in police custody in America.

As they carried placards and signs with different emotive phrases such as ‘Black Lives Matter’ or ‘end racism’, in groups of 20 and under the guidance of the Royal Gibraltar Police, the march made its way from American Steps to John Mackintosh Square via Chatham Counterguard and Irish Town. Many of the marchers wore face masks.

Mr Montegriffo addressed the crowd and said they were there to signal their support for a global call to end racism in the wake of Mr Floyd’s death.

He explained that Black Lives Matter was a call to “our conscience, our historic conscience”, recalling how there had been a detachment of black slave soldiers on the Rock and how ships from Gibraltar had been involved in the slave trade.

“It is said by some people that the present generation should not have to pay for the sins of their forefathers and foremothers,” he said.

“That is true, but if the present generation does not examine with conscience what we have done in the past and what we continue to do today, then we will have lost the fight for a conscience and democratic society that deals with everybody with justice and with fairness.”

Next to speak was Bayside teacher Charlie Bishop, who provoked many reactions and rounds of applause from those gathered.

He noted that it was not just Black Lives Matter that was important but that it was vital too to call out antisemitism, homophobia and anti-Islamic sentiment, adding he believed those who marched were there because they were against any form of discrimination.

“There are many forms of racism, some of it on an individual and personal level, which we have to say and have to be honest exists in Gibraltar, let us not pretend,” he said.

Mr Bishop said “there is low level racism in Gibraltar and we have to accept that”, adding that the Moroccan community had been discriminated against for many years, as had the Jewish community.

Even Gibraltarians had been victims of racism, he said, subjected to colonialism and derogatory terms such as “Gibbo” and “Llani”.

“Of course all lives matter, but black lives matter and they are more under threat [around the world] than any other group,” he said.

Rosalina Oliva and Isobel Ellul, from No More Shame, addressed the audience as did Michael Netto, who has long campaigned for the rights of minorities under the umbrella of Unite the Union.

Also in attendance were members of the GSD Opposition Daniel Feetham, Eliott Phillps and members of Together Gibraltar Craig Sacarello and Neil Samtani.

While organisers estimated approximately 200 were in attendance, the RGP put the figure at 120.

Govt to mark Commodore Creighton’s bravery with Medallion of Honour