Six years to the day of the opening of the Mario Finlayson National Art Gallery at the City Hall, a re-dedication ceremony was yesterday led by Culture Minister John Cortes in the presence of Mayor Christian Santos, Paulette Finlayson, artists, guests and staff of Gibraltar Cultural Services who have been responsible for the refurbishment and new look at the gallery. The gallery yesterday remained opened to the public and saw a stream of people throughout the day.
There are 100 works on display, both newly acquired or taken from Government offices and in store from the Gibraltar Art Collection.
In his address, the Culture Minister welcomed Paulette Finlayson, daughter of Mario Finlayson, emphasising that the National Gallery was a space to commemorate and showcase Gibraltar’s art heritage. GCS, he said, as custodians of the Government’s art collection – The Gibraltar Collection – actively searched for works by these artists to further enhance the collection.
There are recently acquired works on display by Gustavo Bacarisas: ‘Paisaje’, ‘Jugando con la abuela’ and ‘Bodegon de frutas’. There are many other works on view which may not have been seen before or not been seen for a long time, including those by Leni Mifsud, Jacobo Azagury, Rudesindo Mannia and Mario Finlayson, and which now are “having their moment in the limelight.”
A new addition to the gallery is the work of local artist, playwright and musician, Elio Cruz. 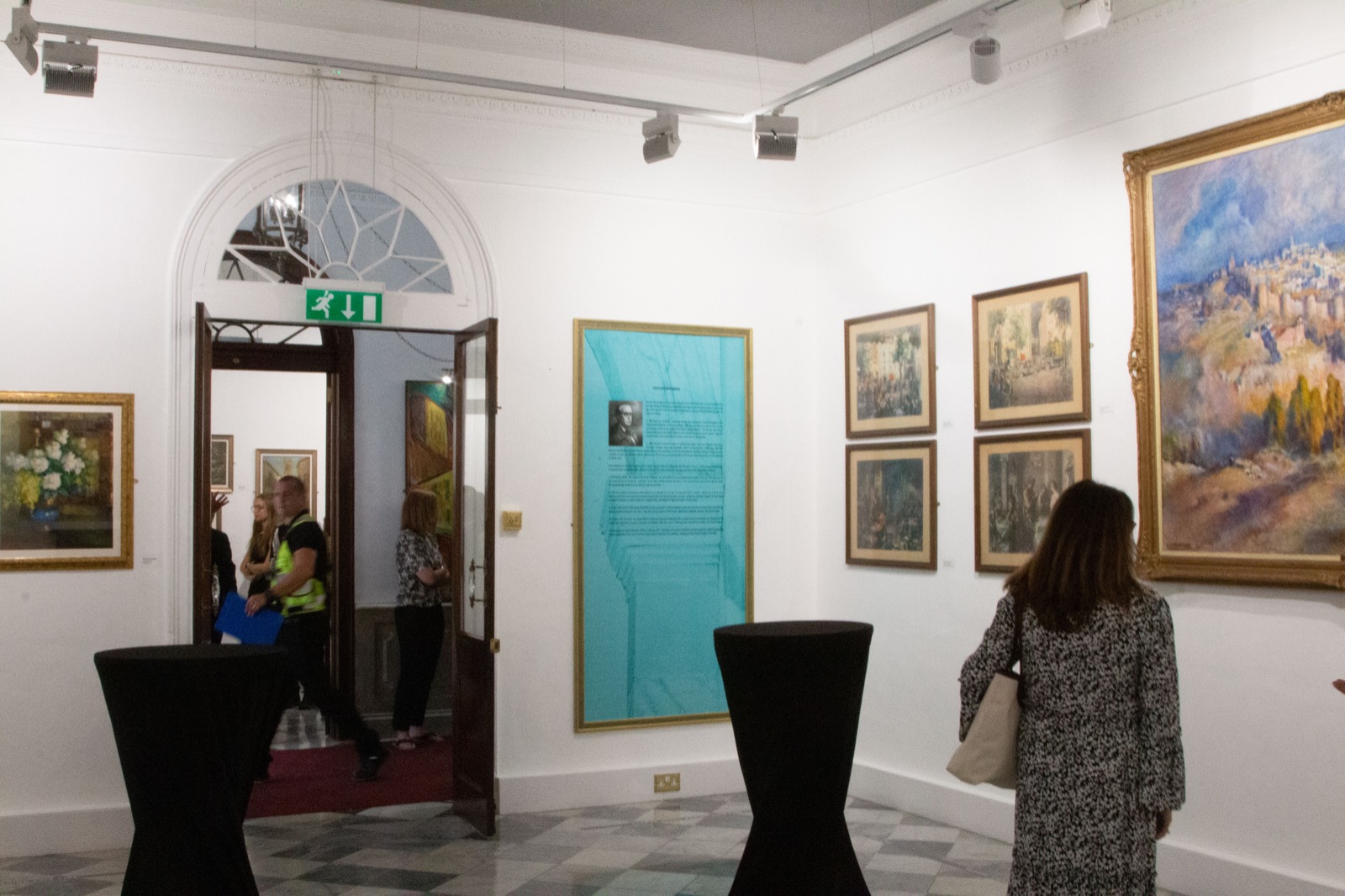 Paulette Finlayson, told the Chronicle that she was very pleased to see some of the works on display and pointed out that her father would have totally approved that the works by Elio Cruz, a lifelong friend of her father, should be displayed as part of the National Gallery.
The creation of a national gallery, Culture Minister John Cortes told those present, had been campaigned for by several people but none had done so “so fervently or passionately than our dear friend, Mario Finlayson; artist, teacher and broadcaster,” as he recalled his art series of programmes in the early days of GBC.
“Quite rightly, he is considered the doyen of Gibraltar’s Fine Arts,” he stated.
Dr Cortes recalled how, at the opening of the retrospective exhibition of Mario Finlayson’s work by Gibraltar Cultural Services in January 2015, it had been Chief Minister Fabian Picardo who announced that the national gallery would carry his name in recognition “of his talent, inspiration and influence to so many students, artists and to the community of Gibraltar as a whole.”
“The Mario Finlayson National Art Gallery, rightly named, opened on 2, June 2015. The project had been headed by the then Chief Executive of Gibraltar Cultural Services, Yvette Zarb, who was instrumental in making sure the gallery came to fruition and making Mario’s decades and long campaign, and his dream a reality,” he added.
The Government, he also commented, had kept its 2011 manifesto commitment to establish a national art gallery and a contemporary modern art gallery. GEMA will also see a re-dedication next week. Gibraltar Cultural Services, he committed, would continue to work to encourage young people, students, cultural organisations, residents, tourists, and everyone to visit this gallery.
“Housed in the historical City Hall, the building also adds to the experience. Exceptional art is only enhanced when viewed in such a stately and dignified architectural gem which we have at the heart of our city.”