MoD personnel sign up for blood donations that could save lives

The MoD held a Blood Donation Drive at the Princess Royal Medical Centre (PRMC) in Devil’s Tower Camp on Wednesday morning, in support of the GHA.

“We are doing a blood drive for the GHA to help them out because we see that they have advertised that they need blood donations, and so far we have had over 30 people take part,” said Lead Medical Assistant, Tom Laws.

The drive took place on Wednesday but Mr Laws has not ruled out further events should the GHA require their help.

For Mr Laws himself, it was the first time he had donated.

“It was fine, quick. Audrey [Baglietto, a nurse practitioner in the blood donation department] knows what she is doing,” he said.

Mr Laws undertook a pre-donation blood test just to make sure that he is fine to donate the full amount of one pint of blood.

“It is quite painless, just a little sharp scratch,” he said.

He is encouraging others to take part.

“If someone has had a traumatic incident and they need fluids back in them, the best way is via blood because you want to keep as much blood in the body as possible.”

Medical Assistant, Chief Petty Officer Mark Edmonds, said the plans for the drive started a few months ago when they approached the GHA before Christmas, following on from something he did previously in the UK.

“We asked before Christmas but then because of Covid restrictions and all those sorts of things we weren’t able to set it up,” he said.

“But then the GHA were doing the drive.”

“Tom has been the leading force behind it, trying to get the GHA in, liaising with them.”

“We have got a good working relationship with the GHA anyhow so there are regular meetings between the PMRC and the GHA.” 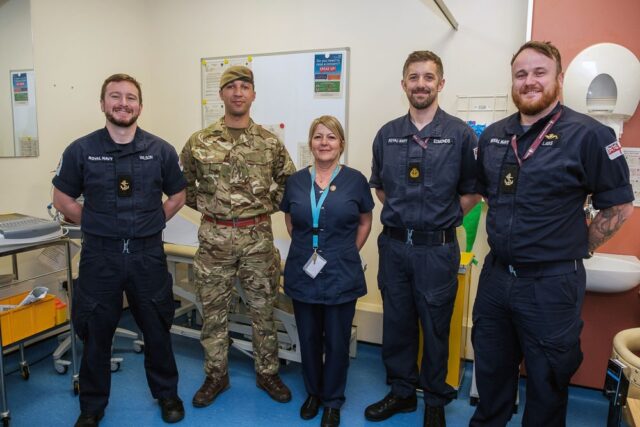 “I have given blood before, I have done it quite a bit in the UK. It is a short, sharp scratch and at the end of the day if you are eligible to give blood and you give a pint of blood, potentially that pint could save someone’s life.”

“Everyone has different blood types. I have a more common one but if someone who has a rare blood type is able to give a pint of blood that is worth doing,” he added.

Nurse Baglietto said the drive is as a result of the GHA having issues with getting blood and some units from Spain.

“We have a strong database of donors but we want to build a stronger one,” she said.

“At the moment we are also looking into getting donors for apheresis.”

This was a reference to a process whereby, using specialist equipment, the cellular and soluble components of blood are separated.

“The donor gives whole blood and the equipment processes it and if you need platelets or you need plasma, it will collect it and the red cells go back into the donor.”

“So it is a process of collecting, getting the components we need and then giving back whatever we don’t want.”

The team has undertaken this process with some blood donors for over a year as previously they used to always get it from Spain.

However, against the backdrop of Brexit, looming contingency measures were implemented to ensure supply would always be there when needed.

The length of time the apheresis process takes depends on the age and size of the person, but generally it can take from 35 minutes to an hour.

“The ideal candidate is someone who has already given a few times a normal donation and they have been OK and they have not had any problems during the donation. If they are confident to give, we would pass them over to the apheresis team,” she said.

Blood type does not matter when it comes to apheresis.

“We can get any blood type,” she said.

There are some restrictions though on donations.

If someone has had Covid, for example, they cannot donate any blood for 28 days.

“I encourage people to first become a blood donor, it is something that is literally painless and will take less than a half hour of their time,” she said.

“They would only be called three or four times a year, for males it is four, for females it is three.”

“For the apheresis it is different because we are giving the red cells back to the donor so it means they will not become anaemic so with apheresis they can come once a month.”

Members of the public can register as blood donors by email blooddonations@gha.gi or by calling 20072266 ext. 2252 between 8am and 4pm Monday - Friday to speak to a Senior Donor Carer.
Blood donors must:
Be between the ages of 18 and 60
Have had no tattoos, piercings or acupuncture within the last year
Have no any underlying medical health conditions