Now in Poland, a Gibraltarian man describes nightmare journey from Ukraine to safety

The Victor children and their neighbours in the bunker under their homes in Kyiv.

A Gibraltarian who made his home in Ukraine has described the trauma of fleeing with his family from Kyiv as Russian President Vladimir Putin launched an invasion of the country last week and the capital city came under fire.

Darren Victor, his wife, Natasha, five-year old daughter, Sky, and four-year old son, Erik, fled from Kyiv on Friday, a day after Russian troops invaded Ukraine and as bombs exploded near their home.

They are now safely out of the country and will be arriving in Gibraltar on Thursday.

But even amid the relief of escaping the violence in Ukraine, Mr Victor is torn with concern for his brother, who also lives in Kyiv with his family but remains in the Ukrainian capital with few options to escape.

The Victors began their arduous journey last Friday, making their way from Kyiv to Lviv, a town 70km away from the Polish border, and then to Warsaw in Poland.

Mr Victor moved to Ukraine some 20 years ago to teach English along with his brother, Blythe. The two brothers made the Eastern European country their home.

But while Mr Victor is on his way to safety in Gibraltar, he said it would take a “miracle” to get his brother and his family out.

Speaking to the Chronicle from his hotel room in Warsaw, Mr Victor described the moment when the family decided to leave their home in the Left Bank of Kyiv. 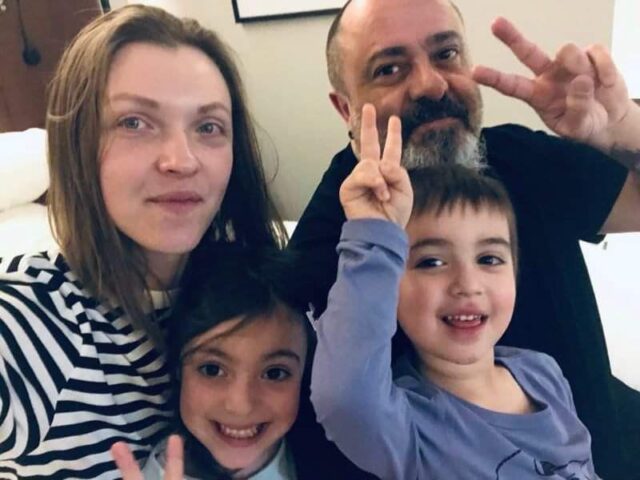 The family live close to the Boryspil International Airport in Kyiv, which was one of the first targets for Putin’s troops.

“On Tuesday I had a bad feeling and had read that Putin was planning on striking within the next 48 hours,” Mr Victor said.

“I had plans on buying medication and so on.”

“But on the Thursday morning I could not sleep and had a very bad feeling.”

“I was awake when it started and the explosions were loud enough to wake my wife up.”

The children, meanwhile, were in a state of confusion as the bombing continued.

“We waited and waited, and the bombing slowed down a bit,” Mr Victor said.

“There was a bit of peace and quiet but then it got worse and we heard the sirens.”

“That was our trigger to leave our flat and head into the bunker.”

The family packed up a few essentials, such as clothing, food, heating materials, mattresses and went to the basement of their building which served as a bunker where they spent a night.

The children were unwell with a cold, and Mr Victor, an asthmatic, was unable to get the inhalers he needs.

There were other families from the building who took to safety alongside the Victors, but the conditions were far from comfortable for any.

“There was a feeling of confusion rather than fear,” Mr Victor said.

“No one expected this to happen even though we were told this was going to happen.”

“I felt impotent as a person, as a husband, as a father, not knowing what I was going to do.”

“My mind was rushing and thinking all sorts of scenarios that were going through my head.”

A few minutes later the network was shut down.

“There were hundreds of people with us on the trains, and all of a sudden the sirens went off,” Mr Victor said.

“We heard the planes flying and there was a stampede.”

“I had to hold my wife and children against a wall.”

“It was at that moment that I was expecting anything to blow up or an explosion.”

“The moment we realised nothing was going to blow up we grabbed our kids and ran with the people into the underground to get a train.”

The train journey from Kyiv to Lviv proved to be a challenge in itself. The trip, which normally takes six hours, took around 17 hours instead.

Mr Victor explained that the train had to stop and start again in order to avoid crossing into Russian territory or to avoid missiles as it continued on its way.

There was panic at Lviv as well when the family jumped onto their second train which took them into Poland.

But there was a chaotic crush at the station as people tried desperately to get onto the train and into safety. For a brief moment, the Victor family was almost separated in the frenzy. 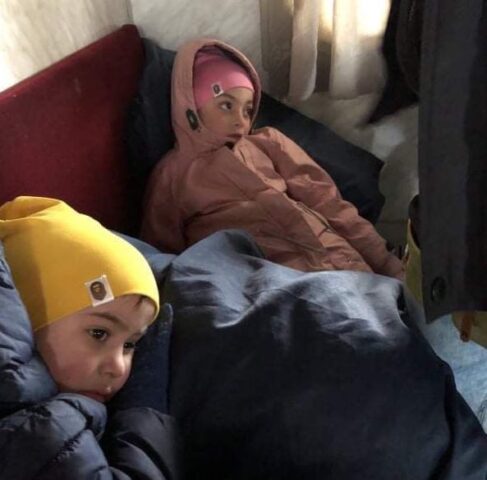 “I was at the entrance and holding my son with one arm and my wife with the other, and screaming at a group of Nigerians to help my wife,” Mr Victor said.

“They helped her and my daughter onto the train but we were nearly separated.”

The family faced a long journey with no food or water, and the train had to stop and make long diversions on its way in order to avoid the Russian offensive.

Before crossing the border into Poland, the Ukrainian authorities checked the passports and the travel documents of all on board, which took hours in itself.

While waiting for almost six hours, there was a provocation on the train and Mr Victor was fearful it could have got out of hand.

“Luckily enough after so many hours of waiting, the train started again and we crossed into Poland,” Mr Victor said.

“We breathed an immense sigh of relief as we did so and I have to say, on the Polish side, it was impressive how we were treated.”

“It was another wait as they had to clear the train but while waiting, we received food, water, medical attention and they were there constantly, they missed nothing.”

“There were people waiting outside the train station who were offering lifts to people anywhere in Poland for free.”

Mr Victor and his family were taken to Warsaw to a hotel while arrangements were being made for their return to the Rock. 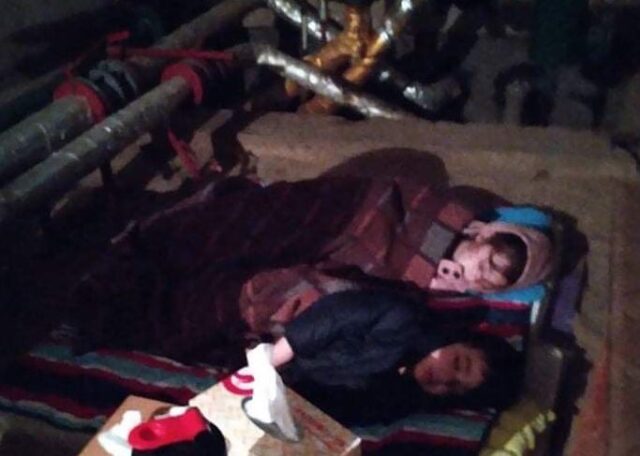 Before leaving Kyiv, Mr Victor reached out to the Chief Minister, Fabian Picardo, in a heartfelt plea on social media, and the Gibraltar Government swiftly moved to do what it could to help repatriate Mr Victor along with his family.

The Victors will be arriving in Malaga on Thursday from Warsaw, and Mr Victor said he is grateful and appreciative of the efforts taken by those in Gibraltar.

Expressing concern for his brother, Blythe, Mr Victor said he lives in the suburbs in Kyiv.

“When all this happened it did not give him time to get out, and he is basically behind enemy lines,” Mr Victor said.

“For him to get out of there it is almost impossible.”

“We have been in touch and we’ve talked, and he does tell me the truth and tells me what is happening.”

“I know the area and I know that the actual meaning of the word, miracle, is what is needed to get him out.”

“I am not just saying this as a figure of speech.”

Mr Victor said Gibraltar’s response to the war in Ukraine has been “heart warming”.

“The messages, the prayers, the concern, the gathering I have been told is happening, my mother keeps telling me how beautiful the Moorish Castle looks lit up in the colours of the Ukrainian flag, it is heart warming,” he added.

“Knowing how my Gibraltar is receiving my wife and children, and soon my mother-in law as well, and hopefully my sister-in-law and niece and nephew when my brother gets out, it is truly touching.”

“Slava Ukraini, and Heroem Slava. These are two phrases people have seen online, and it means glory to Ukraine, and may the heroes be praised.”

Mr Victor’s family were among 700,000 Ukrainians who have fled the country into its neighbouring EU countries since the invasion began last Thursday, with many seeking refuge in Poland, Romania, Slovakia and Hungary. 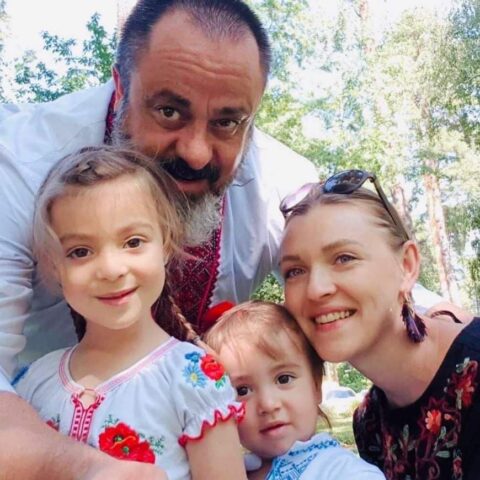 For its part, the Gibraltar Government announced that it had waived visa requirements for Ukrainian nationals holding multiple-entry Schengen Visas temporarily.

The United Nations has estimated that close to 700,000 people have fled to neighbouring countries since the invasion began in what the UN Refugee Agency has warned looks set to become Europe's largest refugee crisis this century.

Nearly a week into the invasion, which Putin has called "a special military operation", the flood of fleeing people showed few signs of easing.

Across central Europe, where memories of Moscow's dominance in the wake of World War Two run deep, thousands of volunteers converged on the borders, bringing food, clothes and blankets.

Most refugees have crossed into the European Union - membership of which Ukraine aspires to - in eastern Poland, Slovakia, and Hungary and northern Romania. Authorities have set up tents to provide medical aid and process asylum papers.