On a tabletop of volcanic tuff, Orvieto

By Charles Durante
Orvieto has become synonymous with dry white wine and we are all familiar with the name from the labels that decorate wine bottles from the region. We had read up on the city and realised there was more than the justly famous wines to lure people to this Umbrian stronghold.

It was too late for coffee by the time we arrived, so we decided to sample one of the white wines in one of the many wine shops (enoteca) which dot the main street, the Corso Cavour. If I remember correctly, I think we sampled wines elaborated from the Grechette and Trebbiano grapes. Barbara is more of a connoisseur than I am and she assured me that the wines had a clean, crisp finish with just the right amount of complexity. I bowed to her superior knowledge and made note of her comment for future reference. 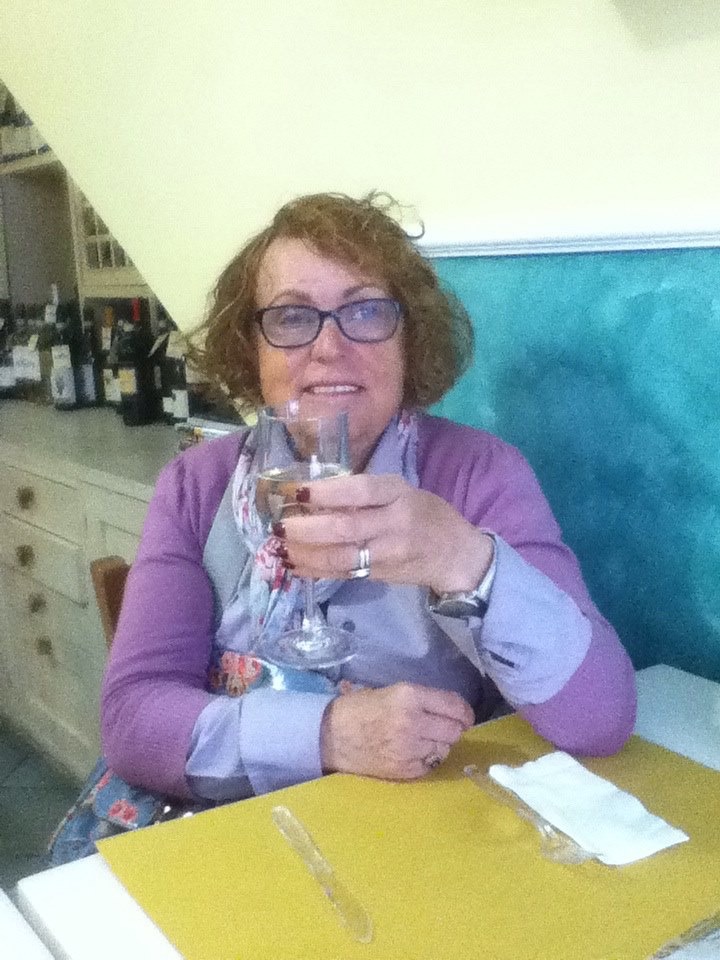 We didn’t want the wine to befuddle our brains or impair our vision so we exercised some restraint and traipsed to the edge of the outcrop where the duomo stands. Now Orvieto is built on a spectacular tabletop of volcanic tuff whose sheer sides fall 325m to the vine-covered valley floor-a cliff-edged remnant of the four volcanoes whose eruptions also created the soil that produces the fine wines. The natural beauty and striking geological features have attracted settlers here from ancient times, with both the Etruscans and Romans colonising and building fortifications and dwellings. The Roman name of Urbs Vetus (the old city) gave rise to its modern name, Orvieto. Sadly, the city was devastated by the Black Death in 1348. Then a combination of a power struggle with Florence and internecine feuding led to the city’s decline.

We stood in awe in front of the facade of the duomo. Now this church front is unrivalled in Italy and vies with the Florence duomo for first place as the grandest church edifice in the peninsula. The cultural guru Jacob Burckhardt called it ‘the greatest and richest polychrome monument in the world’; Pope Leo XIII, in turn, praised it as ‘the golden lily of Italian cathedrals.’ The facade is truly monumental with its riot of columns, spires, bas-reliefs, sculptures, dazzling colours, colossal doorways, and hundreds of capricious details held together by four enormous fluted pillars. The rose window alone would absorb your attention for a few days if you were to do justice to its intricacy and symbols.

We had caught sight of a marvellous delicatessen during our wanderings and decided to buy some food there and have an open-air picnic, thus avoiding spending too much time in a restaurant. We bought some porchetta, salami, various cheeses and truffles and sat down in front of the duomo, savouring the local produce and keeping our eyes firmly focused on the impressive facade. 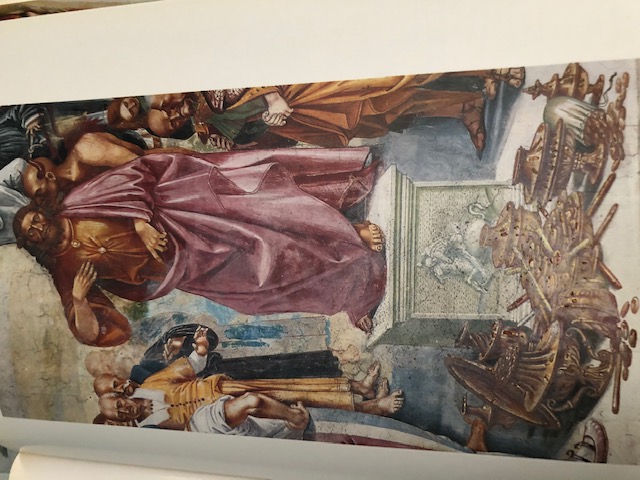 Once we were no longer distracted by our rumbling stomachs, we entered this jewel of a church, gingerly making our way to the Capella di San Brizio. Our reading had not prepared us for what we found on the walls of this chapel. What a magnificent display of human anatomy: firm buttocks, muscular thighs, vigorous torsos, grimacing devils, ghastly skeletons, strange goings-on, cryptic allusions to fairly esoteric texts, a parade of malcontents, sinners and, now and then, some angels and the redeemed!

Of course, we are referring to the sequence of frescoes by Luca Signorelli. It is said Michelangelo saw them and decided, if possible, to outdo Signorelli with his Sistine Chapel paintings. Certainly, the scale of Signorelli’s work, the multitudinous crowds which populate his scenes, the depiction of sinning humanity and the exaltation enjoyed by the saved, the painterly skill and the way the human nude has been portrayed so masterfully, are all powerful examples of the painter’s genius. Vasari stresses the originality of Signorelli’s work and uses concepts like inventive genius, ‘ingegno’ and ‘invenzione bizzara’ and capricciosa’ to account for the overwhelming impression the frescoes make on the viewer.

We have space to examine only one of the frescoes; the one Signorelli considered his ‘capolavoro’ (masterpiece): the Sermon and Deeds of the Antichrist. It is now accepted that the figure of Antichrist was influenced by the personality and works of Savonarola, the Dominican friar who had been hanged and burnt at the stake in Florence in 1498.

There is no doubt that Signorelli has given us a very disturbing portrayal of the sinister and mysterious atmosphere evoked in the obscure prophecies about the end of the world in the Gospels and the Apocalypse. Against a vast and desolate background dominated by a large classical building (some say it is the temple of Solomon), depicted in distorted perspective, the false prophet is shown disseminating his lies and spreading the message of Antichrist. He has the features of Christ, but it is Satan who tells him what to say. The people around him, who have piled up gifts at the foot of his throne, have clearly already been corrupted by the iniquities the scriptures have warned us of. And, starting from the left, we have a description of a brutal massacre, followed by a young woman selling her body to an old merchant (it seems Signorelli had a sarcastic turn of mind as the young woman is supposed to be a former girl friend, who had jilted him!). The Antichrist orders people to be executed and even resurrects a man, while a group of clerics, huddled together like a fortified citadel, try to resist the devil’s temptation by praying.

A dark picture, but there is some hope at the top part of the painting where the Antichrist is hurled from heaven by a very competent angel. On the left side of the painting there is a self portrait of Signorelli and one of Fra Angelico, who had preceded Signorelli in decorating the duomo.

Upon arrival at Orvieto, you are welcomed by a large hoarding claiming a miraculous corporal is kept in the cathedral. Every Italian city worth its salt has some indispensable relic, so Orvieto boasts of housing a bloodied white cloth placed on the altar for the host and paten during mass The story goes that an incredulous priest (he was beginning to doubt the miracle of transubstantiation) was travelling from Bavaria to Rome in search of a solution to his theological quandary. He stopped at Lago di Bolsena to say mass and, during the celebration of the ritual, the host started to bleed and drops of blood fell on the corporal. 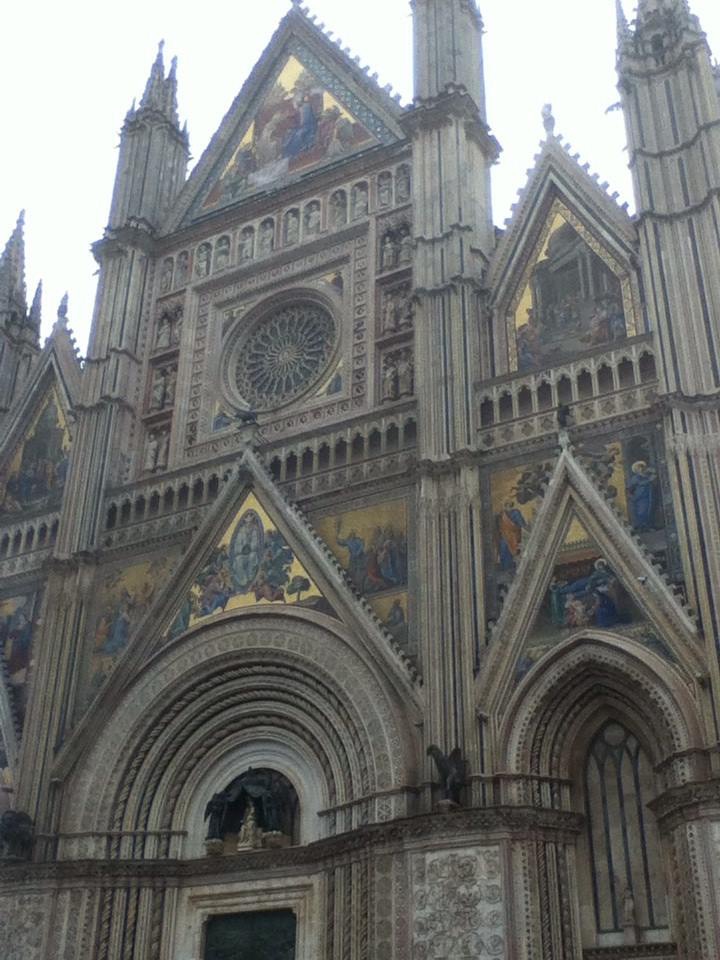 This was nothing short of supernatural so the stained cloth was whisked away to Pope Urban IV who proclaimed a miracle. This happened in 1263; a year later Thomas Aquinas drew up a papal bull instigating the feast of Corpus Domini. The cathedral was supposedly built to contain the relic which is now kept locked away in a massive, jewel-encrusted casket in the Cappella del Coporale.

The wines alone make a visit to Orvieto worthwhile. The cathedral, dedicated to the Assumption of Mary, and the striking Signorelli frescoes, make it a must.