Gibraltarian artist and graphic designer Geraldine Martinez continues to work on her largest mural to date, the façade of the Department of Education building on Queensway.

This is not her first mural for Gibraltar Cultural Services, having previously been commissioned to paint the walls of the Cooperage Lane tunnel between Chatham Counterguard and Irish Town.

The process for this latest work started in 2019 when she entered the designs into the GCS competition. 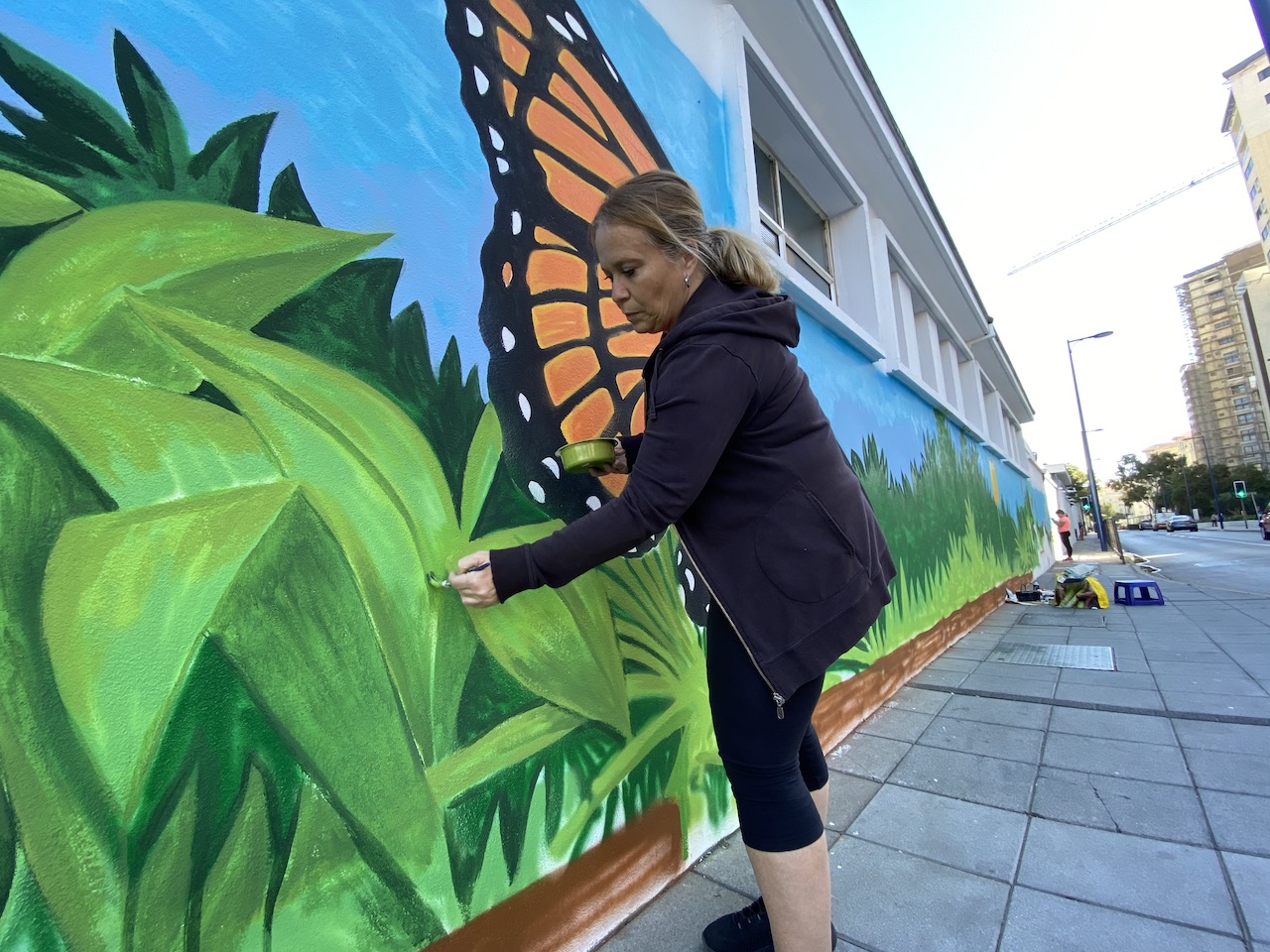 But, due to logistical issues, she was unable to start until this year, especially as the location was a lot more challenging as was the size of the wall that needed to be painted.

To enable her to create the piece optimally on 82 square metres of wall, she needed to trace it on to the surface first.

That is simpler in theory than in practice.

“I needed to ask for help from the GCS because I needed to partially block the road in the evenings so I could trace it from my projector onto the wall. I could not do that at the pavement,” she said.

“I did it in a spate of two hours per night and we did it in five nights.”

“[My daughter] Kate helped, my sister helped and a couple of other friends helped, so I had an entourage of three at a time.” 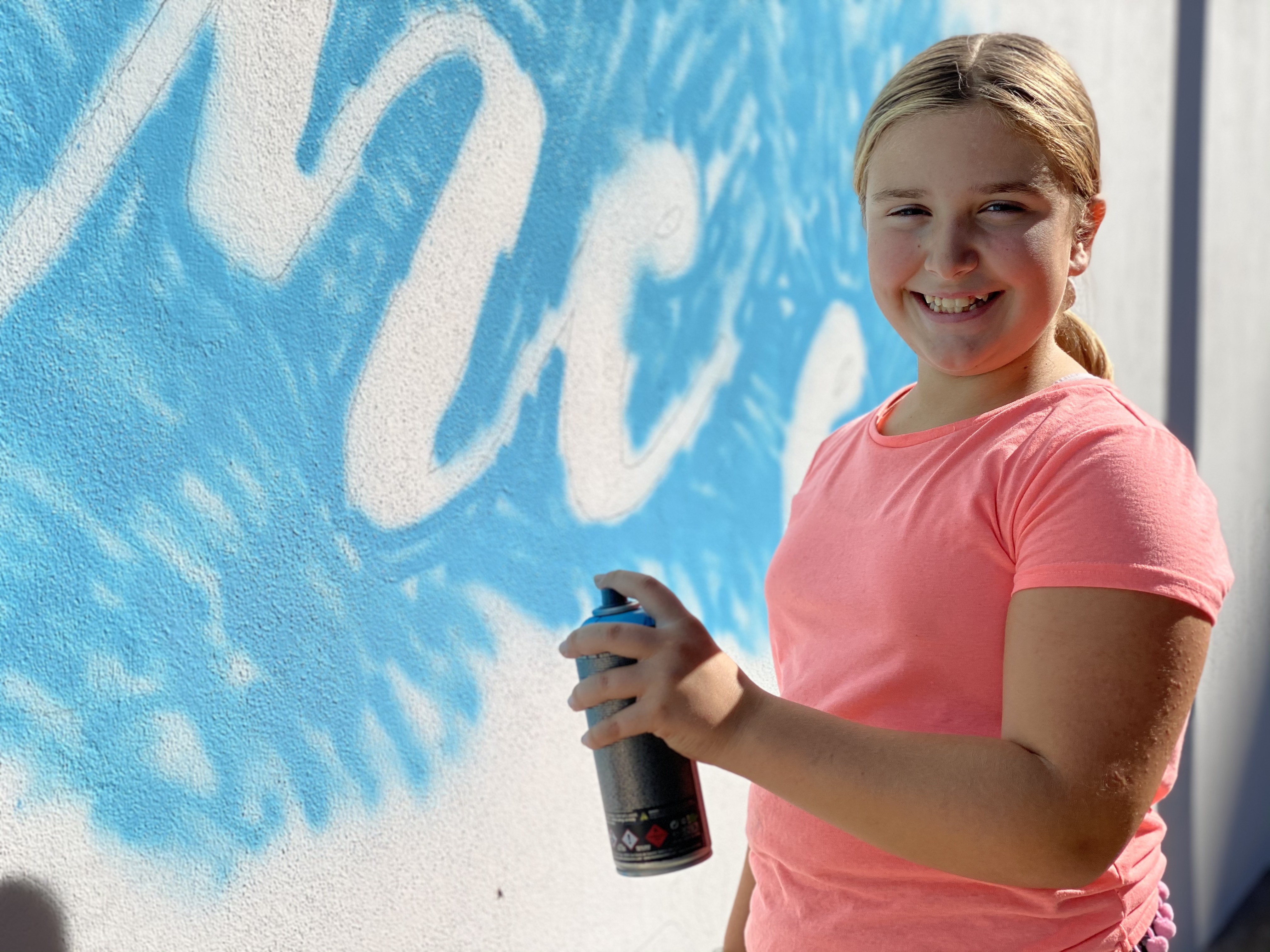 She explained that because the area is a wind tunnel and the lights are very bright at night, it was not as easy to trace as they had expected.

A person had to shelter her with an umbrella so she could complete the tracing.

“Once I knew I had the tracing done it would be far easier for me to get on with the painting,” she said.

“But then I realised that painting is a challenge with the aerosols because it is a wind tunnel, so I can only pick days when the wind is very, very minimal,” she said.

She said the aerosols where making her job easier because of the size of the wall and this enables her to cover more space in a shorter length of time.

Once she has done some aerosol work, she paints the fine details with a brush.

“Another layer of it was trying to define who my target audience is,” she said.

“Is it the people in traffic driving by in their cars, or is it is the passers-by? I am finding it is a combination of both.”

“So, it is drawing a fine line between attention to detail which I’m very much a stickler for, and trying to step back and say, actually, I do not need that level of detail.”

“It’s extremely interesting because it is a new problem for me.”

Despite the challenges, she added: “I am loving it.”

“I want to do more. I am hooked. I do not know what it is about mural work, I just love it.”

She muses it could be that her full-time work has her working solo and at home, while this is out in the open and people interact with her all the time.

“I am getting people shouting at me ‘you’re doing a brilliant job’ and sticking their thumbs up at me and then I have little insects or dragonflies and butterflies trying to land on the foliage,” she said.

“Then I get little kids saying ‘I love what you are doing and I am really good at drawing butterflies’ and I have got the grandparents or parents saying ‘what a fantastic thing this is to watch’."

She said one day, by pure coincidence, she had different members of the community and from different religions all giving her similar praise and this was a positive reinforcement for her.

Also by coincidence, shortly after she made these remarks during the interview, a man pulled up on his motorbike, stopped and said: “It’s very, very good eh? I came by the other day and I thought it looked beautiful.”

The brief for the mural was a garden theme. The scene she has created is as if the wall was not there and the viewer was looking directly into Commonwealth Park behind the Department of Education.

“It is also an environmental piece and, tying in with my style in Irish Town, it has a quote that says: ‘touch the earth gently, for all is connected’,” she said.

“So, it is giving you food for thought that everything has a cause and effect.”

Kate, her 12-year old daughter, is also helping out by using aerosol, a medium she has not used before.

“It is not that hard but it can get hard when it is really windy,” she said.

“I am enjoying it, it’s really good.”

When asked if she would like to do something like this again, she said yes, but only with her mum.