Officials tasked with managing Gibraltar’s response to Covid-19 are keeping a close eye on the rate of increase in cases, even while acknowledging that many of the infections detected recently are milder than in the past.

The recent rise in Covid-19 cases in Gibraltar is linked to a parallel “explosion” of infections in the Campo de Gibraltar, the Director of Public Health, Dr Sohail Bhatti, said in an interview on Thursday, as he advised the public to be “sensible” this midterm.

Dr Bhatti described how an increase of cases across the frontier and the return to almost normality in schools has contributed to a spike in cases in Gibraltar over recent weeks.

But despite the initial stark outlook, the figures are being monitored by analysts aiming to anticipate a spread, with milder cases now being regularly detected.

Dr Bhatti said the way these figures are interpreted has changed over recent months, particularly in light of the sharp rise in testing capability locally.

“We are finding far more milder cases than we did before and that’s why I am anxious but not to an extent where I am thinking this is a problem,” Dr Bhatti said.

Asked whether a figure could be put on the number of cases Gibraltar would have to reach in order to impose more restrictions, Dr Bhatti said his analysts are looking into this.

“Originally we had worked out that anything between 15 and 20 cases, increasing at about 14% were signs of a surge,” Dr Bhatti said.

But more analysis into the virus and its spread in the local population is being done to reframe this original estimate.

Adding to this, Dr Bhatti said he has tightened the definition of what it is to be a close contact.

Currently a close contact is a person who has spent more than 15 minutes in close proximity with another. 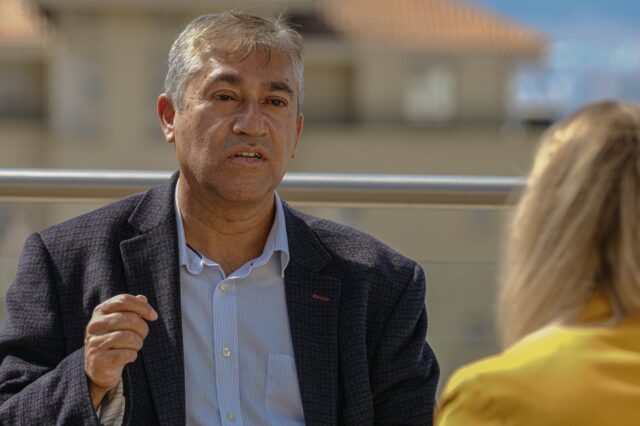 This has led to more people being asked to self-isolate, and therefore a tighter grasp on the pandemic.

“But we continue to have sporadic spread throughout our population and one of the reasons for that is we can’t control our frontiers,” Dr Bhatti said.

He added: “We have been part of the Campo explosion of cases, we have an open frontier and lots of people are bringing the cases in.”

“We also have schools that are pretty much as near normal as we can make it, and that’s also an area where the infection is spreading.”

“However, what we are doing now is swabbing six to seven times more than what we did in March and April. We only did about 100 a day, we’re close to 700 if not higher a day at the moment.”

“Even if we had the same number of cases we would [now] see far more cases than we did then.”

There are currently three people in hospital with Covid-19, two in the Covid ward and one in the Critical Care Unit.

“We have one in CCU and I believe they are there as a precaution, they are not struggling, they are on oxygen and they just want to observe,” he said.

Dr Bhatti has strongly urged the public to be sensible this midterm and Christmas, especially if travelling.

National Day saw families and friends socialise together, but Dr Bhatti said the aftermath effect it had on the elderly was a concern.

“We had a lot of cases in National Day in the elderly because people sat down to eat meals and it was the elderly that made us really alarmed,” Dr Bhatti said.

“We’ve had a lot of close shaves and I worry at some point our luck will run out.”

When making plans this Christmas and midterm, Dr Bhatti advised people to think of others and follow the rules.

“Clearly I have lots of concerns around midterm break and Halloween,” Dr Bhatti said.

“But this virus is relentless.”

He added that people travelling this midterm break could bring the virus back to Gibraltar, and encouraged people to call 20041818 before travelling.

The effectiveness of contact tracing has also laid bare the stress points in the system, with SMS messages delivering test results in the works.

Every evening around 1,000 people are called, from those receiving their results to close contacts being told to isolate, and Dr Bhatti said this heavy work tends to start later in the day once results have been returned.

“If you think about it 1,000 people have to be rung up in the afternoon, that’s a lot of work that has to be done,” Dr Bhatti said.

“And then there’s a lot of work that has to be done with the positives.”

Dr Bhatti described how a lot time is spent calling up each individual person, especially when issues arise such as those who do not answer the phone.

“We also phone people up on the subsequent days,” he added.

Dr Bhatti estimates that around a third of cases are now being detected by contact tracing, but explained that this figure changes daily.

Of the 15 cases detected on Wednesday, 10 had been identified by contact tracing, he said.

Dr Bhatti said the number of cases contact tracing can deal with is driven by the complexity of these cases.

“If, for example, we get a school, there’s a lot children we then have to contact and that takes a lot of time,” he said.

“Unfortunately, the way our current system works with swabbing is the results tend to come in late in the afternoon.”

Currently contact tracers work a 12-hour shift from 9am to 9pm, and the main bulk of the work begins later in the afternoon.

“If the volumes are larger than we can cope with, we have techniques also to manage that.”

“The whole edifice of Gibraltar’s bio-security rests on their effectiveness.”

Dr Bhatti added that he would like to carry out another randomised Covid-19 prevalence survey to capture the sporadic spread through the local community.

The last survey found that current testing regime was only picking up one in 10 of cases some months ago.

He estimates that testing is now detecting far more cases.

“It would also provide us intelligence on whether it is in particular workplaces,” Dr Bhatti said.

“I want to include all children in secondary school in that, so we would eventually get some intelligence.”

“The reason we haven’t done it yet is that it depends on saliva testing which is much more acceptable in terms of testing.”

Dr Bhatti said the saliva tests are still in the works.

EDITOR’S NOTE: This article has been updated to clarify that the latest number of cases referred to in the text was data released on Thursday, and included not just resident cases but non-resident cases too.

As hospital goes to Amber alert, Parliament bestows Freedom of the City on GHA and awards Medallion of Honour for Bhatti