Up until 14 years ago, delivering mail to the village of Gásadalur was a strenuous, uphill business. Tucked into a valley hugged by steep mountains, the remote Faroese village on the island of Vágar had no road access, forcing hardy postmen to trek over a clifftop path three times week.

“At that time, it was the only form of connectivity,” recalls guide and mountaineer Jóhannus Hansen, whose grandmother was one of the ‘Goose Valley’s’ 13 residents. “There were only two phones in the village when I was a kid.”

Even now, one old woman – Petra – refuses to have electricity installed. Up until recently, she used a pet cow in her basement to generate heat.

The arrival of a multi-million-pound mountain tunnel in 2006 revolutionised life, adding to a warren of rocky burrows that link the 17 inhabited islands of this volcanic archipelago, sculpted by powerful waves from the Atlantic Ocean and Norwegian Sea.

But although the Faroe Islands, a self-governing territory belonging to the kingdom of Denmark, are only 330km north of Scotland (there’s a direct flight from Edinburgh to the airport on Vágar) – they occupy another time and place. Slow-paced and considered, life couldn’t be more removed.

For a brief, blissful three-month period, the islands were even Covid-free, until guests attending a wedding in capital Tórshavn sparked a wildfire of cases. It was quickly brought under control by an effective track and trace system, partially delivered by word of mouth. In a population of 53,000, everyone knows someone. Attentive rather than parochial, it’s that kind of place.

Now every person entering the country – tourists and residents – must take a Covid test at the airport (from £50 for foreigners as of October 1), self-isolating at their hotels or homes for 12-24 hours until results come through. Anyone staying more than six days will be required to take another test.

Still, fewer tourists than usual have gathered to witness the Múlafossur waterfall in Gásadalur, where a wisp of white water plunges as elegantly as a flashy bartender’s high pour. At the cliff edge, fulmars circle around the slim cascade, while puffins clumsily crash land onto ledges above old harbour steps crumbing into the sea.

Further into the valley, the village feels much more peaceful. Retired ram horns coil around windowpanes where curtains barely twitch, and an honesty box overflows with rhubarb, one of the few items that easily grows here. It’s a throwback to a time when the postman would have been nursing his tired legs.

For a destination which ‘closes for maintenance’ three days a year to keep the beast of overtourism at bay, a lull in visitors must surely have been a relief?

Tensions were once so high, I’m told, a disgruntled farmer installed a debit card payment machine on his gate, to curb (or arguably capitalise upon) the number of hikers unwittingly walking across his land.

But Jóhannus assures me most people are eager for visitors to return. “We’re very welcoming people,” he smiles.

I have a chance to sample that hospitality – known as heimablídni – in the company of Anna and Óli Rubeksen, ninth generation sheep farmers who open their sea-view home for supper clubs.

Dressed elegantly in a silk shirt, her cheeks flushed with blusher, Anna is nothing like the hay-baling shepherdess I’d imagined. Yet she and her husband still herd their 150 sheep alone, often scaling precipitous grazing areas in deep snow and violent winds.

Skerpikjøt – wind-dried mutton – is a speciality here. Left to hang in a ventilated shed for up to nine months, it’s essentially rotten flesh, but when Anna serves the dish, it’s too rude to refuse.

A luxuriant starter of codfish and egg bathed in silky butter gives me enough faith to trust anything the self-taught kitchen whizz prepares. And as it turns out, the tender, slow-cooked meat is surprisingly palatable, although its vinegary, pickled flavour is one I think I’ll leave the locals to enjoy.

Evening light streams through Anna’s windows, silhouetting hulking islands offshore. It’s a reminder the sun does sometimes shine on these exposed, steep rising basalt lands, so often smothered by low-lying cloud. Given conditions are so changeable, Anna promises me there are always rays spotlighting part of the archipelago. Hesitating, she adds: “Probably”. It explains why the fickle Faroes have earned their nickname ‘The Land Of Maybe’. 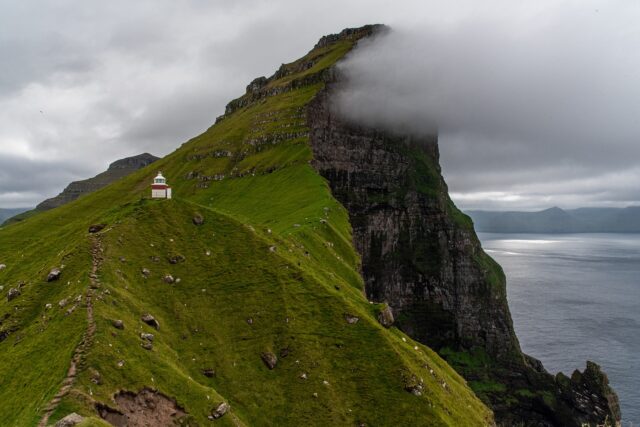 If days can be bright, local legends are almost always dark.

From tales of eagles swiping babies, to myths of suicidal humans disguised in zip-up seal suits, no story has a conventional happy ending. Both didactic and dark-humoured, they are nevertheless regaled with entertaining vigour.

On the island of Kalsoy in the rugged north of the archipelago, musician and tour guide Rani Nolsøe introduces me to the statue of Kópakonan, the seal woman. Kidnapped by a young male farmer who subsequently boiled her pinniped husband and children in pot, the angry selkie cast a curse on the village of Mikladalur. Emerging from the gossamer mist, her bronze effigy is a reminder of how wild the sea, weather and imagination can run in this part of the world.

“The islands are full of ‘hidden people’,” insists Rani, as we climb a narrow, vertiginous path to the island’s Kallurin lighthouse. Sat beneath the soaring arc of a bird-clustered cliff, the setting has become an Instagram hit for photographers seeking to capture ever-changing light and shade.

Out here, in this exposed landscape, there doesn’t seem to be many places for people to hide.

“They look grey, but they are among us,” explains Rani, clearly aware I’m not convinced. But as he describes the unknown, ethereal entities who straddle several realities, I soon sense he’s referring to any Faroese resident who travels – even for a minute – back to their myth-cloaked, disconnected origins.

In these remote areas, to be fair, that journey’s not so hard.

Proving the point, Rani takes a detour on our way back to the ferry terminal. Swerving left in a mountain tunnel, he follows a rough-hewn exit to a U-shaped valley above the sea. The secret route was originally built for farmers to access the land, but Rani brings people here to listen to what he refers to as the “diamond sound” – a soothing, melancholic chime of dripping water, gusting wind and guttural raven calls.

“This is what the islands sounded like when Irish monks first arrived here in the 6th century,” he whispers.

At a time when everything around the globe feels so discordant, it’s a welcome harmony.

The Arborealists visit Gibraltar for ‘Being With Trees’ exhibition

Charles and Camilla view flowers left in memory of Philip