Chief Inspector Roy Perez during a press conference today as the RGP issued another call for information in the Montegriffo murder investigation. Photo by Johnny Bugeja.

The Royal Gibraltar Police has released CCTV images of passers-by in the hour leading up to the suspected murder of Michael Montegriffo and has urged them to come forward.

The release of fresh information comes more than three years after Mr Montegriffo was found dead on Prince Edwards Road at 11.15am on July 7, 2018.

RGP Chief Inspector Roy Perez stressed those pictured in the CCTV images are not considered to be suspects, but rather it is hoped the images could jog their memory and aid investigations. 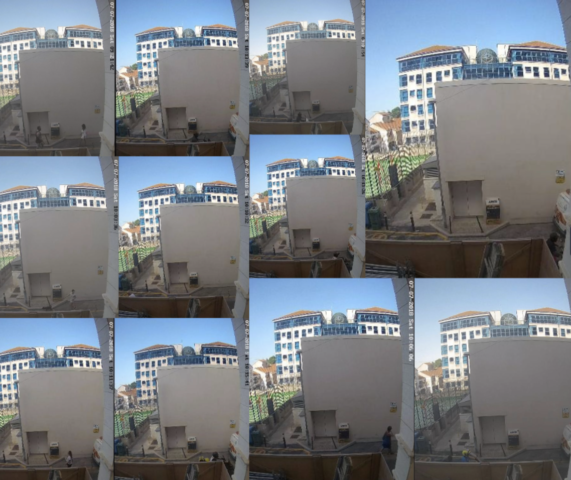 He added even information a person might not deem significant could assist detectives.

In the past, police officers have concentrated on speaking to people who were in the
immediate vicinity of Gavino’s Dwellings.

The scope of their investigation has now been widened and officers will interview anyone who might have been within several hundred metres of the scene.

“Having been in the area and they could have very well have seen or heard comments or anybody within the area who could be of interest to the RGP and the investigation team,” Mr Perez said.

Captured on CCTV are people driving on motorbikes and walking towards or away from the location.

Last year the Greater Manchester Police Major Crimes Unit conducted a peer review of the case and analysed all the evidence collected so far.

Mr Montegriffo, aged 58 years, was last seen wearing a red T-shirt and blue denim shorts, and was found lying on the ground at Gavino’s Dwellings.

The murder probe was launched after two post mortems found that Mr Montegriffo died of injuries that were not consistent with having fallen from a height or being struck by a passing vehicle.

A £25,000 reward remains in place for any such information, the largest reward ever offered in Gibraltar.

Mr Perez said no one had come forward with fresh information to claim the reward.

“Unfortunately not, that is the strange thing about this,” Mr Perez said.

“We are such a small community.”

He added: “You’ll remember a week after the incident we set up a road check in the immediate area.”

“As you know a Gibraltarian usually does the same thing week in week, week out, and we set it specially to see whether or not we would get something and surprisingly we haven’t had anybody despite having a £25,000 reward.”

Mr Perez said evidence was picked up at the scene, but now the investigating team is ensuring that no stone is left unturned in the hope that justice is served in due course.

He added that the family of the late Mr Montegriffo continue to be updated on the case. 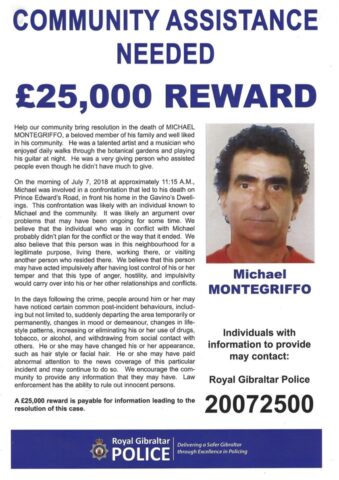 Previously, detectives revealed a working theory that the assailant was known to the victim and that the two had been in conflict prior to Mr Montegriffo’s murder.

They believe that the suspected murderer was in the area where Mr Montegriffo was found for a legitimate purpose, living there, working there or visiting another person who resided there.

Anyone who knows someone pictured in the CCTV images or has been photographed is asked to contact the RGP and share any information.

The individuals captured in the images are asked to contact the RGP on email primrose@royalgib.police.gi or via the Duty Officer on: 200 72500.