A young cinereous vulture, or black vulture as it is also known, was rescued after it was spotted in the sea a few hundred metres off Europa Advance Road.

The bird was spotted by Jake Busto as his father, Clayton, was sailing towards Europa Point.

He noticed something floating on the surface of the sea that was attracting a number of gulls around it.

At first, the father and son thought it could just be some flotsam or a shoal of fish on the surface.

But on deciding to investigate, they noticed the bird bobbing in and out of the water looking extremely weak and distressed. 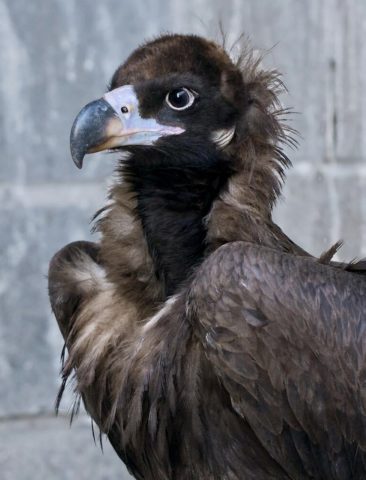 Mr Busto contacted the Environmental Protection Rescue Unit of the Department of the Environment, Sustainability, Climate Change and Heritage and on their advice used a landing net to retrieve the bird and bring it on board his vessel, much to the amazement of young Jake who had never seen such a large bird up close.

He then arranged to meet up with Environment Officers, handing the bird over to them.

Vincent Robba, Head of the GONHS Raptor Rescue Unit, was called and the bird was taken away for some much-needed care and rehabilitation.

The cinereous vulture is one of the heaviest and largest raptors in the world.

Thanks to many different conservation projects, the numbers are now slowly increasing, especially in Spain, where the population is now at more than 2,000 pairs. They nest in trees and sometimes on cliffs.

Jake, as the black vulture has now been named in honour of its young rescuer, spent a few days at the centre being fed and looked after as, due to its ordeal, it was underweight and in a weakened state, GONHS said in a statement.

After making a full recovery Jake the Cinereous Vulture was successfully released from the top of the Rock last week but not before a quick meet up and farewell with his rescuers.