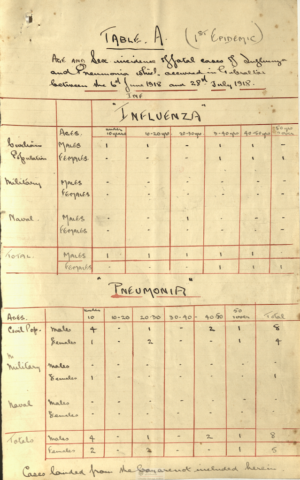 The Medical Officer of Health (MOH) made further interesting recommendations:
1) Funerals- he suggested that the danger was not from the body in the coffin but from contact with persons who had been in the sick room. He conferred with the heads of religious communities with a view to abolishing funeral services in churches making the grave-side service short and confining attendance at the cemetery to relatives only. Coffins and funeral parties were not permitted to enter the church. Undertakers were requested not to carry coffins on shoulders and to place sawdust or other absorbent within them in cases of haemorrhage.
2) Religious Services – he did not think it desirable to close places of worship.
3) Schools – he did not recommend closing schools as this would have tended to drive children into crowded and unventilated homes.
4) Washing – he prepared a scheme for steam or chemical disinfection of washing from merchant shipping and warships to be carried out on the wharf or before being brought ashore. The Captain of the Port would direct the mode and place of disinfection as instructed by the Sanitary Commissioners. The Surgeon Rear-Admiral made arrangements for all naval washing to be disinfected before being brought ashore. The MOH asked if laundresses could use the sea-bathing establishments at Chatham Counterguard or Bayside as washhouses.
5) The Fever Hospital or Lazaretto – One of the Sanitary Commissioners suggested that cases from the bay (shipping cases) should not be brought into the town’s Colonial Hospital but should be treated at the Fever Hospital. The MOH was quite forceful replying that this was impossible owing to staff shortage with many civilian doctors working 18 hours a day .The Fever Hospital at the time was located next to the Inundation (which is now the Laguna Estate) abutting right onto the Rock. The MOH was also very concerned with the appearance of other infectious diseases such as tuberculosis, typhoid (enteric fever), plague, smallpox, cerebral meningitis and yellow fever and recommended sending flu patients to the Colonial Hospital and any overflow there were to be sent to buildings in the vicinity. Indeed cases of tuberculosis, typhoid, measles and mumps were occurring concomitantly and at least two cases of smallpox (imported) appeared and were sent to the Fever Hospital.

Further recommendations included isolation of the sick, free ventilation, disinfection of clothing and bedding, provision of more biers (used by undertakers for transporting coffins), prohibition of indoor public assemblies (details of this are incomplete) and wakes and placing influenza on the list of infectious diseases. On the 1st November 1918 His Excellency the Governor H.L. Smith-Dorrien declared influenza an infectious disease as recommended by the Sanitary Commissioners and influenza was added to the list of infectious diseases contained in the Public Health Ordinance. He further ruled that the body of a person dying from infection should not be moved except for the purpose of burial unless the MOH deemed otherwise, designed to try to contain infection.

In the second wave there were approximately 3000 cases reported, but the MOH estimates probably there were a total of 6000 cases as many did not receive medical attention. Influenza was said to have been more prevalent in the ‘crowded’ districts of Willis’s Road, Castle Street, Flat Bastion Road, Devil’s Gap, tenements in the vicinity of Rosia and Irish Town. Some doctors including Drs Triay and Dotto were required to make home visits, ‘maybe 100 visits/week’; the former fell ill himself and gave up work and the latter, newly returned from England, was engaged to serve as an extra district doctor. Dr Durante was released by the military authorities to assist. Spanish doctors were unavailable as they were in demand in Spain. Treatment of patients probably included bed rest, isolation as far as possible, hydration, change of bedding and clothing and aspirin, the latter probably in large doses. Possible cases of aspirin overdosing might have occurred. Aspirin was well known to lower temperatures in patients and to relieve pain but in large doses can be fatal and can cause bleeding (nose-bleeds were reported!). Antibiotics, of course, were not widely available until approximately 1942. Gibraltar, with its very hectic and busy port not just militarily but also commercially and particularly during World War I, suffered from the flu pandemic in terms of cases landed from shipping and this overtaxed the health system. The Colonial Hospital was said to have been ‘full’ with patients though at no time did it ‘overflow’. Some of the nurses were Les Souers de Bon Secours (an international Roman Catholic women’s religious congregation for nursing) and were overworked and reduced as they were in demand in France.

The MOH stated that over 30% of the total civilian population suffered from influenza in some form or other. Between June and November he recorded deaths from influenza as separate from pneumonia but assuming that the pneumonias to have been secondary to influenza we can estimate death rates. During this time there were a total of 220 deaths of which 100 were civilian, 10 naval, 23 military and 87 were shipping cases. The MOH estimated the total deaths from flu and pneumonia in the civilian population at 100, which, for the estimated civilian population of 16549, gave a death rate of approximately 6 per 1000 or 0.6%.

The following two photos show tables submitted by the MOH to the Sanitary Commissioners and show the demographics of influenza (plus pneumonia) fatalities in both waves. Comparison of the tables immediately confirms that the second wave was much more lethal. Interestingly if the age columns are looked at, it is obvious that a significant proportion of fatalities occurred in the younger age groups. In the second wave, 81% of deaths occurred in those under the age of 40. If it is argued that the military and naval comprise a younger age group then, if the civilian group alone is looked at, 76% of deaths occurred in those under 40 and 84% in those under 50. This observation concurs with the unusually high mortality for young adults reported around the world.

Andrew Sene is a former Surgeon General at St Bernard’s Hospital Gibraltar and this series was produced with contributions by Anthony Pitaluga Head of the Gibraltar National Archives.