The Minister for Health, Samantha Sacramento, presented Covid badges to second year nursing students in recognition of their hard work during the pandemic.

Sandie Gracia, the Director of Nursing and Gibraltar Ambulance Service, was also present at a ceremony in the University of Gibraltar.

Before she presented the cohort with their badges, Ms Sacramento told them that she was deeply appreciative that they were undertaking the course, She had praise too for those who made the course a possibility.

“It is just so important to invest in our future and to invest in the future of Gibraltar. And, you represent that,” she told them.

“And, if something positive can be said about the pandemic is that it has shone a spotlight on the importance of nursing and on healthcare, which I think until this point has never been so acknowledged and so understood.” 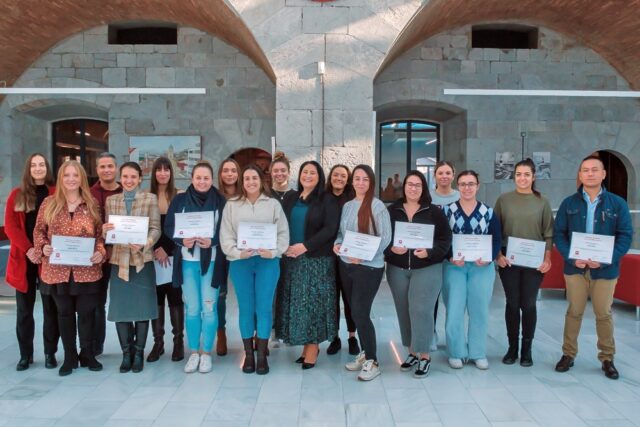 She commended them for being on the forefront of a very difficult year and for being there from when the virus first started in 2020 right through until the vaccination roll out.

“I am glad that Sandie had the idea of having a badge to acknowledge the work of all the nursing staff who worked on the front line,’ Ms Sacramento said.

“Although you are students you were very much a part of the essential work that took place on the frontline.”

She stated she hoped they were enjoying their course and the placements they were undertaking as part of it.

“I very much look forward to your graduation next year and to welcoming you to the GHA, but in meantime study hard, be successful and remember that you are role models as well to the people and the students we want to recruit for next year,” she said.

She also thanked the University and the School of Nursing and the whole team that make the course possible.