The Panama-flag very large crude carrier Grace 1, which was carrying two million barrels of light crude oil, was boarded 2.5 miles off Gibraltar just before 2am on Thursday morning.

The vessel and its cargo have been detained, the Gibraltar Government said in a statement.

The Gibraltarian authorities said they had information giving “reasonable grounds” to believe the vessel was acting in breach of European Union sanctions against Syria.

“In fact, we have reason to believe that the Grace 1 was carrying its shipment of crude oil to the Banyas Refinery in Syria,” said Gibraltar’s Chief Minister, Fabian Picardo, in a statement issued in the early hours of Thursday.

“That refinery is the property of an entity that is subject to European Union sanctions against Syria.”

The move had the strong backing of the UK Government and appeared to stem from an intelligence tip-off from the US Government.

The UK's Foreign Secretary, Jeremy Hunt, said the swift action by the authorities on the Rock and the Royal Marines would deny valuable resources to Bashar al Assad's "murderous regime" in Syria.

The operation was led by the Royal Gibraltar Police, which sought the assistance of the Royal Marines to use their specialist boarding skills to help ensure the police and Customs officers could gain access to the tanker at sea.

The Gibraltar Port Authority was also involved in the operation, as were the Gibraltar Defence Police and Gibraltar Squadron. 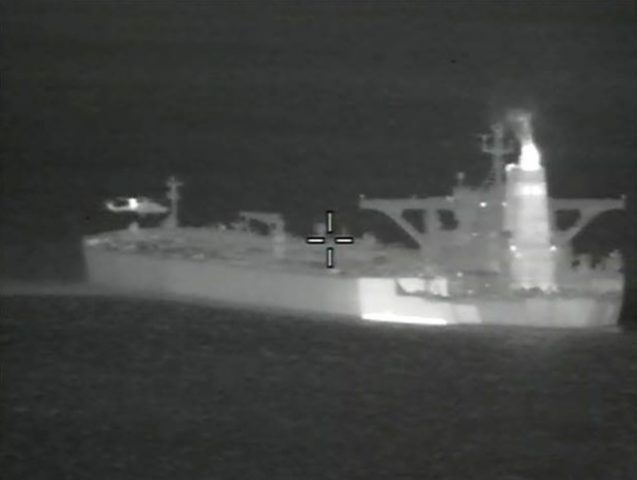 A Royal Navy helicopter drops Royal Marines on the deck of the Grace 1.
Photo: Ministry of Defence

Royal Marines from 42 Commando were the first to board the vessel by helicopter, taking control of the vessel's bridge within minutes without any shots being fired.

The first marines onto the vessel descended on ropes from a Royal Navy Wildcat helicopter, while others boarded from rigid-hulled inflatable boats.

Around 16 armed Royal Gibraltar Police officers were also involved in the mission, including one who was helicoptered onto the deck of the ship during the early stages of the police-led operation.

Customs officers also later boarded the vessel, with around 60 people in total involved in the operation.

Downing Street welcomed the operation and said it sent a clear signal about the sanctions regime.

The Prime Minister's official spokesman said: "We welcome this firm action to enforce EU sanctions against the Syrian regime and commend those Gibraltarian authorities involved in successfully carrying out this morning's operation."

"This sends a clear message that violation of the sanctions is unacceptable." 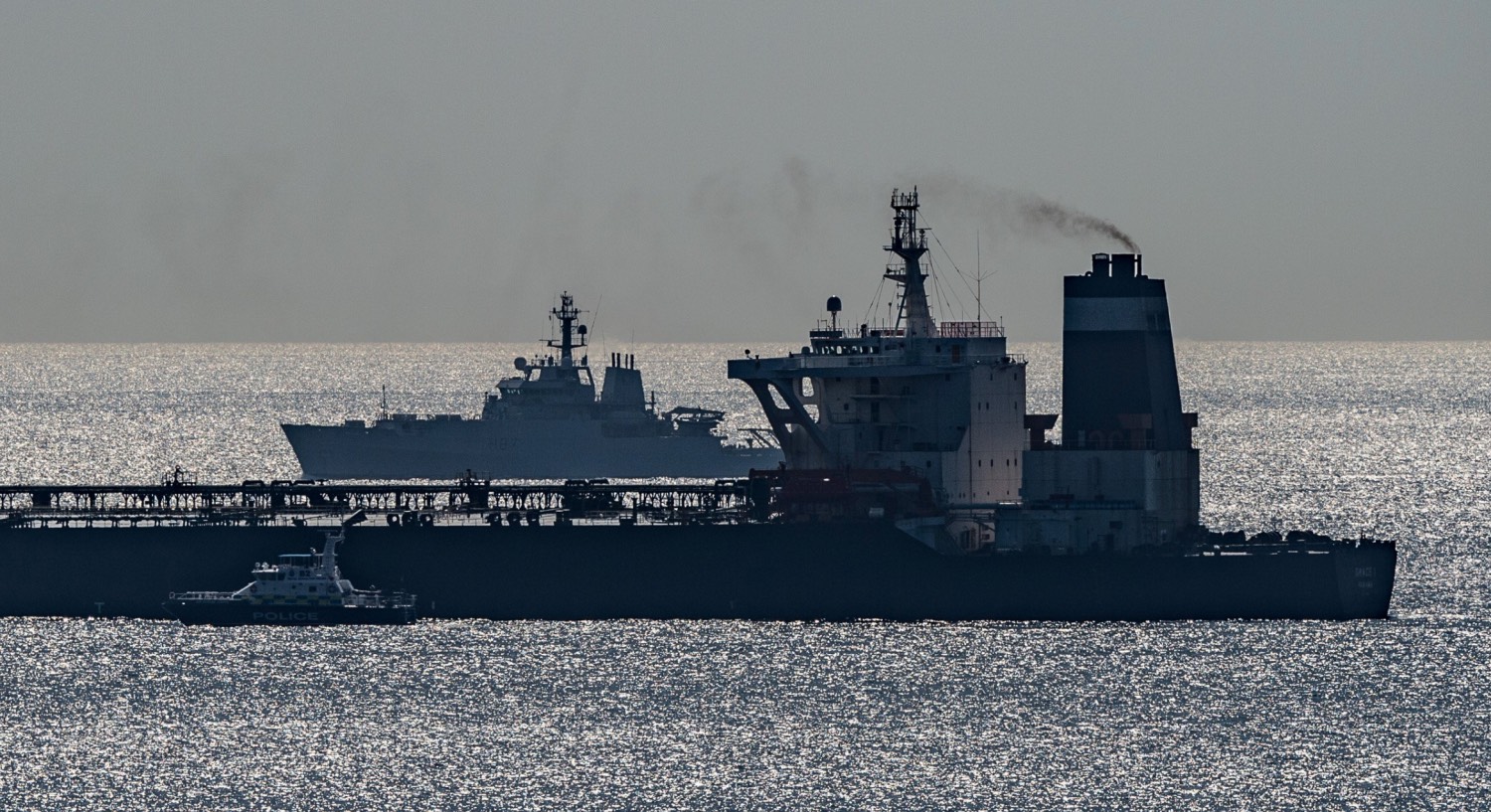 But Iran's response came within hours, summoning the British ambassador to voice "its very strong objection to the illegal and unacceptable seizure" of the ship.

Spain's Foreign Minister, Josep Borrell, said Spain had been aware of the operation, which happened in British waters that Madrid claims are Spanish.

"Naturally we were aware of this operation," Mr Borrell told reporters.

The Spanish minister, who was nominated this week as the candidate for the EU's top foreign policy job, claimed Guardia Civil vessels had been "guarding the area" in which the operation unfolded.

The Chronicle understands, however, that only a single Spanish vessel monitored the operation from a position well outside British waters at the time.

Commenting on the boarding operation, Mr Borrell added "we are studying the circumstances in which it happened."

"It was a demand by the United States to the United Kingdom and we are looking into how it affects our sovereignty because it happened in, what we understand, are Spanish waters," he said. 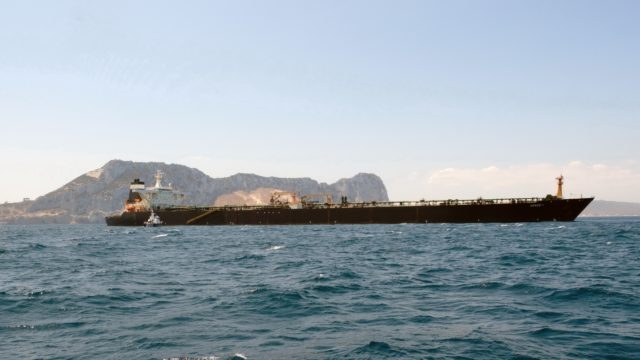 Iran's angry response yesterday confirmed the origin of the oil shipment, although the key reason for the seizure of the vessel was its destination, not its source.

While Europe has banned oil shipments to Syria since 2011, it had never seized a tanker at sea. Unlike the United States, Europe does not have broad sanctions against Iran.

"This is the first time that the EU has done something so public and so aggressive. I imagine it was also coordinated in some manner with the U.S. given that NATO member forces have been involved," said Matthew Oresman, a partner with law firm Pillsbury Winthrop Shaw Pittman who advises firms on sanctions.

"This is likely to have been meant as a signal to Syria and Iran - as well as the U.S. - that Europe takes sanctions enforcement seriously and that the EU can also respond to Iranian brinkmanship related to ongoing nuclear negotiations."

Authorities in Gibraltar made no reference to the source of the oil or the ownership of the ship when they seized it.

But Iran's acknowledgment that it owned the ship, and the likelihood that its cargo was also Iranian, drew a link between the incident and a new U.S. effort to halt all global sales of Iranian crude. Iran describes that as an illegal "economic war".

Last night, a spokesman for the Gibraltar Government said documents on the vessel confirmed its cargo was light crude oil, though he would not be drawn on the source of the shipment, only on its destination.

If both aspects are proved, however, the attempt to deliver the Iranian crude to Syria would signal a breach of both EU and US sanctions.

Prior to the boarding operation, the Gibraltar Government published regulations and a notice to enforce the EU sanctions against the vessel and its cargo, in line with the Rock's obligations under international law.

According to data from the specialist maritime publication Lloyd’s List, the ship sailed around the Cape of Good Hope after loading around mid-April off Iran and spending time at anchor in two different locations in waters off the United Arab Emirates.

On Thursday, the vessel was boarded while carrying out an off-port-limits logistics stop in British Gibraltar territorial waters, where it had been due to collect foodstuffs while transiting past the Rock.

The Chief Minister also gave a direction requiring the Captain of the Port, assisted by the Royal Gibraltar Police and Customs, to take control of the Grace 1.

“With my consent, our port and law enforcement agencies sought the assistance of the Royal Marines in carrying out this operation,” Mr Picardo said.

“As the sanctions being enforced are established by the EU, I have written this morning to the Presidents of the European Commission and Council, setting out the details of the sanctions which we have enforced.”

“I want to thank the brave men and women of the Royal Marines, the Royal Gibraltar Police, Her Majesty's Customs Gibraltar and the Gibraltar Port Authority, for their work in securing the detention of this vessel and its cargo.”

"Be assured that Gibraltar remains safe, secure and committed to the international, rules-based, legal order.”

The Governor, Lieutenant General Edward Davis, also congratulated those involved in the operation.

The Governor, himself a senior Royal Marine who has headed the UK's special forces, tweeted: "The Governor joins the Chief Minister in thanking Gibraltar's Law Enforcement Agencies, supported by the Royal Marines, for their professionalism and courage in enforcing EU sanctions by detaining the ship Grace 1 en route to Syria."

Yesterday a spokesman for the Gibraltar Government confirmed that a police investigation is ongoing and that officers are on board the vessel interviewing its crew as witnesses.

If evidence is found on board confirming Syria as the vessel's destination, then arrests could follow.

Under EU law transposed in Gibraltar, breaching the Syria sanctions is a criminal offence.

The Grace 1 had a crew of 28 seafarers, mostly of Indian nationality but including Ukrainians and Pakistanis too.

Customs officers are also on board searching the vessel, which remains at anchor off the east side of the Rock.

The authorities can detain the vessel for a maximum of 72 hours before they have to seek an extension from the Supreme Court.

Beyond that, officials could seek judicial permission extend the detention period for a further 14 days, and periodically up to 90 days after that subject to court clearance.

Aside from any potential criminal case against individual crew members, the fate of the cargo will also have be resolved in Gibraltar's courts, something which is likely to prove length and complex process.

Reuters and PA contributed to this story.

Feetham’s message to Govt on public finances: ‘We told you so’

Govt has lost financial control of a GHA ‘in crisis’, Phillips says

GHA to change board structure to more ‘strategic role’