By Dr Alex Menez
As I surveyed the conference hall from the front table, I counted about 40 people, all readied for the second day’s lectures. The first speaker of the day, Professor Michael Walker from the Universidad de Murcia lectured on Neanderthal research in Murcia. Michael’s comprehensive lecture included accounts of finds from excavations from a range of caves. He explained how the discovery of a small sample of breccia by a speleologist in 1991 led to systematic excavation and research at the Sima de las Palomas del Cabezo Gordo at Murcia.

The breccia contained most of a human mandible. Excavations have provided Neanderthal remains of at least 14 individuals, faunal remains, burnt bones and teeth, and Mousterian implements. Cueva Negra, also at Murcia and dated to 990-772 thousand years, has precocious evidence of fire, the earliest at any Palaeolithic site outside Africa. In addition, a bifacially-flaked hand axe found there is the earliest in Europe.

One of the main research interests of Professor Alvaro Arrizabalaga from the Universidad del Pais Basco is the reconstruction of the life of Palaeolithic hunter-gatherers from the Cantabrian region, northern Spain. The region, he said, had been understood as a narrow corridor in which favourable environmental conditions had “made possible the Neanderthal settlement with an almost continuous character.”

He explained that research over the last few decades including the study of raw materials, geochronology, and anthropogenetics has changed this view and shows that the geography, habitat types, functionality (lithic workshops, kill sites) and location (mountainous areas, moors or plateaux) are important factors. He noted that “the Basque Crossroads on both slopes of the western Pyrenees is constituted in a geographic hinge” and that “this distributes the flow of human and animal populations.”

The next speaker, Dr Enrique Baquedano from the Museo Arqueológico de Madrid described what was clearly an ideal place for Neanderthals. In the Valle del Lozoya, Madrid, “Neanderthals had, all year round, all the essential resources they needed.” These included water, large prey animals, caves and shelters, materials for the production of implements, and wood.

Enrique discussed the three types of sites in the Calvero de la Higuera at Pinilla del Valle. Hyena dens which he said provide information about the fauna that lived at the time of the Neanderthals; hunting camps that record their daily activities; and, at Cueva Des-Cubierta, the accumulation of hunting trophies, some associated with small fires that demonstrate an intellectual capacity superior to what, until now, was considered applicable to Neanderthals.

Genetic research has become central to our understanding of human evolution and over the last few decades genetic data have become essential in the field of palaeoanthropology. The next speaker, Professor Carles Lalueza Fox from the Institut de Biologia Evolutiva, Barcelona participated in the Neanderthal Genome Project which resulted in the first draft genome sequence of this species in 2010. He provided a detailed account of the contributions to the ever-growing knowledge of Neanderthal genetics based on material from Iberia.

The first genetic data from Iberia was a small mitochondrial DNA fragment retrieved by PCR from a bone flake from El Sidrón in Asturias, published in 2005. Since then, further research has been published including the first functional study on a Neanderthal-specific amino acid-changing allele; the retrieval of a complete exome; a complete chromosome 21 and a complete Y chromosome coding region (from El Sidrón); genome-wide data from sediments (from Atapuerca); and the oldest DNA data from the Neanderthal lineage, this from 430,000-year-old Sima de los Huesos at Atapuerca. Carles noted that “Despite being a region not especially rich in Neanderthal skeletons, the Iberian Peninsula can still provide crucial evidence for understanding the evolutionary history of these extinct humans.”

Research at the Gorham’s Cave Complex UNESCO World Heritage Site by scientists at the Gibraltar National Museum and collaborators from over 30 institutions worldwide has contributed significantly to our understanding of Neanderthals, their behaviour and ecology, their environment and associated flora and fauna, and much more. A voluminous literature, both academic and popular, has amassed over the years. This, and worldwide reportage of research and discoveries at the Complex in the news and press have put Gibraltar on the palaeoanthropological map in a big way. And flowing on from that, provides a welcome boost for Gibraltar from those who want to learn more about the place, its history and people.

These were some of the thoughts I had during the prelude to the next lecture. Sitting at the front table, I told the audience to “Prepare for suspense, novelty, and excitement.”
Professor Clive Finlayson then announced an astonishing discovery that had been made at Vanguard Cave just a few weeks previously. He explained that the cave had not been excavated prior to 1997 and that interesting information had been derived from the excavations. In 2012 excavations began at the top of the cave, these continuing to the present. Then, an exciting moment where “suddenly a little opening at the top…and we peered in. Stewart and Fran were the first to pop their heads in.”

They found a chamber that had been sealed for over 40 thousand years and which was pristine. Clive said that the “deposits plugging this, the youngest dates we have are in the region of 40-45 thousand years ago so anything inside, we are working on is older than that.” During the initial carefully-orchestrated assessment of the chamber there were “surface finds…an interesting whelk, lynx, griffon vulture, hyena, scratch marks from a carnivore which we will have to work on to identify.” Professor Joaquín Rodríguez Vidal from the Universidad de Huelva, a geomorphologist and authority on Gibraltar geology, described the structure and deposits in the chamber noting that broken flag stalactites provided evidence of earthquakes. It was all very exciting indeed.

Articles in the Gibraltar Chronicle and other publications contribute to Gibraltar’s historical record. As fellow researchers know, these sources are used extensively by historians in order to piece together events, views, changes, and many other factors that help in understanding the past. 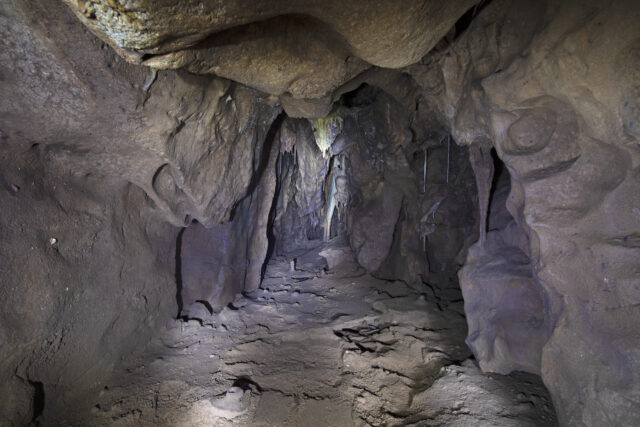 As regards the Vanguard Cave Chamber, Eyleen Gomez from the Gibraltar Chronicle reported upon the discovery in the 25th of September 2021 edition; and Alice Mascarenhas, seasoned broadcaster, presenter, and journalist, well known for her coverage of Gibraltar’s social and cultural life, added a great report to the many she has already written about Neanderthals and related subjects: a speleological and archaeological account of the discovery of a space in Gibraltar not seen by any human for over 40 thousand years. Her report “Vanguard is a time machine, and we will be stepping back in time” was published in the Saturday 2nd of October 2021 edition of the Gibraltar Chronicle and both this, and Eyleen’s account, are essential reading for those who want to know more about this discovery and what the first people to enter the chamber and their colleagues felt and thought at the time.

Think of all the events both inconsequential to the majority of people and those that have become cornerstones of our history over the period that the chamber had been sealed. All the people that have lived or visited Gibraltar, carrying on with their day-to-day lives. Births, deaths; happy and tragic periods, good and bad times. And all the while the discovery made just a few weeks before the Calpe Conference had been hidden and unknown to all. 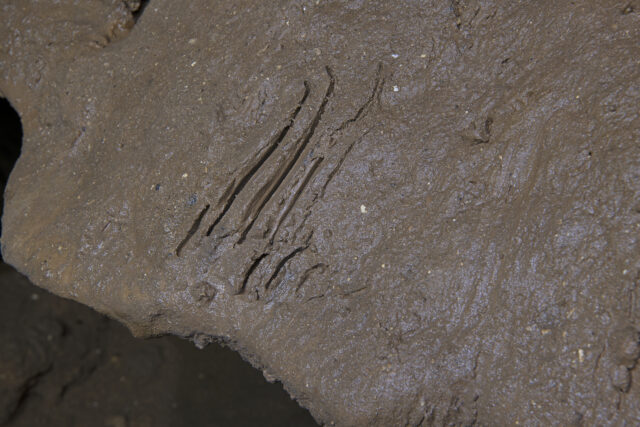 I felt that it was appropriate that the very first people to have entered the sealed chamber had been Dr Stewart Finlayson from the Gibraltar National Museum who has been visiting the Gorham’s Cave Complex with his parents and other researchers since he was a mere nipper, and is now himself a researcher; and, Francisco Giles Guzman (Fran), archaeologist at the Gibraltar National Museum, and son of Francisco Giles Pacheco (Paco), from the Museo Arqueológico Municipal de El Puerto de Santa María, and a founding member of the Gibraltar Caves Project with over three decades of research experience in Gibraltar.

Many years ago whilst I was at Vanguard Cave examining mollusc material from the surface of the sand slope, which ran all the way into the cave and to its ceiling, Clive had told me that he thought the cave may extend back beyond that slope. That was in November 1990 and almost 31 years to the month his prognostication was proved right. This, and the over thirty years of research involvement and leadership by the Finlaysons at Gorham’s Cave Complex led me to think how fitting it would be to name the newly-discovered chamber, Finlaysons’ Cave.

Taphonomy, the study of how organisms decay and become fossilized, is a fascinating area of research. It includes the processes that affect remains from the time of death of an organism through decomposition, burial, and then preservation as mineralized fossils or other stable biomaterials.

Neotaphonomy, focuses on the study of relatively new corpses. Professor Jordi Rosell from the Universitat Rovira I Virgili, Taragona explained that “carnivores are often considered one of the most significant disturbing agents during the formation processes of archaeological sites” and that significant research has been undertaken to identify the behaviour of different carnivore species and their taphonomic signatures including markings on bones such as tooth pits, punctures, and scores. Using the principle of actualism which is “the similarities between current and past phenomena and their causes,” experimental work can be undertaken with extant fauna, including feeding habits and disarticulation of prey to compare with materials at archaeological sites.

A neotaphonomic study of brown bears and other carnivores in the Pyrenees were used to interpret taphonomy at two cave sites in Moià near Barcelona which included “the sequence of consumption of whole carcasses by bears to demonstrate cannibalistic events” and “the impact caused by scavengers on Neanderthal assemblages.”

The final lecture of the day was by Dr Keith Bensusan from the Gibraltar Botanic Gardens and Tyson Holmes from the Gibraltar National Museum. In a fascinating study Keith and collaborators researched a species that has been present at the Gorham’s Cave Complex for millennia. Fossil material of the Eurasian Crag Martin has been found in abundance in deposits at the Complex dated to when the Neanderthals occupied the caves. “Some species present in the fossil record may continue to exist at an archaeological site, allowing study that can fine-tune our picture of the ecological past.”

The Crag Martin roost was first documented in the 18th Century and studies continued through the 20th century to the present. Work since 2016 has revealed this to be the largest known roost for the species globally. The birds use different micro-sites within the roost. Mark-recapture of birds and assessment of their condition “showed very high fidelity towards micro-sites, within and between years.” The study also “provides current knowledge of a bird that has been using these caves since the Pleistocene and more generally on these caves as a refuge.” After the lecture and questions, a lively discussion that covered a wide range of topics from the day’s lectures ended a very successful second day of the Calpe Conference.