By Dr Alex Menez
In my reportage of the Calpe Conference last year I wrote about how restrictions during the Covid-19
pandemic had limited the number of people that attended. Of how difficult it had been to meet and greet
friends and colleagues. This year was different. There were still restrictions in place but as several
speakers noted, “it was almost like the good old days.” It was fine to shake hands, to chat and catch up
with peoples’ news and to discuss research, all without the need to wear masks. And at each of the
sessions, there were between 30 to 50 people in the audience. 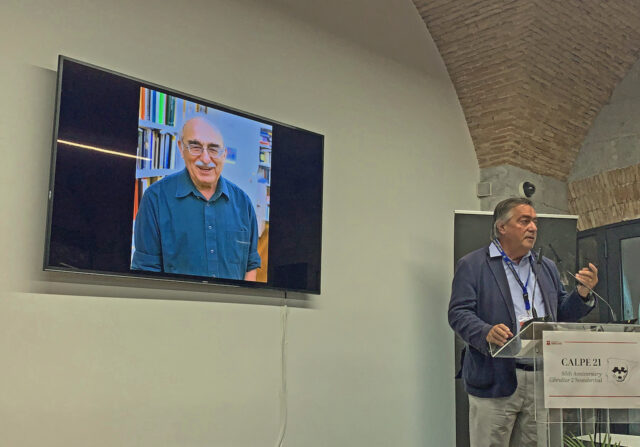 This year’s conference, which ran from the 23 rd to the 25 th of September at the University of Gibraltar,
was the 25 th Calpe. Titled “Iberian Neanderthals,” it both commemorated the 95 th anniversary of the
discovery of the Devil’s Tower Skull, also known as Gibraltar 2, and was a memorial to the world-
renowned Israeli archaeologist and anthropologist, Professor Ofer Bar-Josef (1937‒2020). In her
welcoming address, Vice-Chancellor of the university, Professor Catherine Bachleda, noted that “It’s
such a welcome change to be able to meet in person and be actually able to interact with colleagues” and
said that “we look forward to three days of the latest research . . . the programme is packed with an array
of topics . . . and promises to provide discussion and insight.” She then introduced Professor John Cortes,
Minister for Education, Public Health, Environment, Sustainability, Climate Change, Heritage, and
Culture, who inaugurated the conference.

Minister Cortes dipped into his scientific background to provide some insight to similarities between the
Neanderthals and us noting that “The passage into history of the Neanderthals reminds me of our
vulnerability as a species to disease … to climate change … the Neanderthals were resilient but as a
species they reached an impasse . . . the Neanderthals are no more. They faced challenges related to
climate and social changes and, at a different scale and with many different caveats, so do we. I think it’s
sobering to realize that a species of human can disappear, and that’s a message that I think is not really
part of the debate about the dire situation in which our planet is heading.”

Professor Clive Finlayson from the Gibraltar National Museum then paid tribute to Ofer Bar-Josef. Ofer
was Professor of Prehistoric Archaeology at the Hebrew University in Jerusalem, then Professor of
Prehistoric Archaeology at Harvard University. He studied Upper Palaeolithic assemblages from Sinai,
Israel, the Czech Republic, the Republic of Georgia, and China, and was the world’s foremost authority
on the transition from the Palaeolithic into the early Neolithic Period. His interests included human-
Neanderthal interactions, early pottery production, the relationship between environmental and
behavioural change, and the development of agriculture, among others. Clive and many others at the
conference had known Ofer for many years. He had been an invited speaker at the second Calpe
Conference, “Gibraltar and the Neanderthals,” in 1998 at which he delivered a lecture titled “A
Mediterranean perspective on the Middle-Upper Palaeolithic transition.”

Clive reminisced about the final discussion of the 1998 Calpe noting that “You may not realize this, but
we’re all here thanks to Ofer, because he proposed, he was very impressed with that conference, and he
said that the Calpe Conference in Gibraltar on a regular basis, maybe every three years, should be a
conference on Neanderthals where we all get together and take stock, and here we are.” Also at this
year’s Calpe, and very welcome, was his wife, Dr Daniella Bar-Yosef Mayer of the Steinhardt Museum
of Natural History and Institute of Archaeology at Tel Aviv University, and the Peabody Museum of
Archaeology and Ethnology, Harvard University.

Next on were two Calpe veterans, Dr Marcia Ponce de León and Professor Christoph Zollikofer, both
from the University of Zurich. In what was the Inaugural Lecture, they highlighted how Iberia, with its
rich fossil and archaeological records and great palaeoecological diversity, had played a key role in the
understanding of the biology and culture of Neanderthals. Iberia, they noted “is extremely rich in middle
and upper palaeolithic sites” and these were still providing important data to researchers with many sites
having “been systematically excavated or re-excavated over the past twenty years.”

From the Gibraltar National Museum and the University of Gibraltar, I was the next speaker. Drawing on
published and unpublished primary sources including Dorothy Garrod’s Excavation Journal, I provided
an updated historiography of Garrod’s extraordinary discovery of the Devil’s Tower Skull (Gibraltar 2).
In a similar way that the Forbes’ Quarry Skull aided researchers in understanding the Feldhofer
Neanderthal (Neanderthal 1), so the Devil’s Tower Skull aided researchers in understanding the
Neanderthal child skull from La Quina, France, discovered in 1915. The sensational finds at Devil’s
Tower Cave established Garrod’s reputation as an archaeologist and launched her long and distinguished
career, leading to her becoming the first woman and first prehistorian to be elected to the Disney Chair of
Archaeology at the University of Cambridge, and the first woman to hold a Chair at either Cambridge or
Oxford.

Professor José María Bermúdez de Castro from the National Research Centre on Human Evolution,
Burgos, introduced an intriguing hypothesis at the conference which generated some discussion. A
generally accepted view places the origin of Homo sapiens in Africa as the result of the evolution of a
Middle Pleistocene species. José María noted the lack of evidence of a clear transition between Homo
erectus and the more archaic populations of H. sapiens in the fossil record. The hypothesis is based on
fossils from the Gran Dolina cave site in the Atapuerca complex, Burgos, attributed to Homo antecessor.

Morphometric and molecular analysis suggests this species to be very close to the last common ancestor
(LCA) of H. sapiens and Homo neanderthalensis. The variability of the fossil record in Southwest Asia,
in particular the regions closest to the Levantine Corridor, raises the possibility this could be an
alternative location for the “speciation process that gave rise to H. sapiens and H. neanderthalensis.”
The afternoon sessions commenced after the lunch break during which delegates had enjoyed an excellent
selection of food and drinks and interesting discussion about the morning’s proceedings.

I chaired the
sessions for the afternoon as well as those for the following two days of the conference. Dr María
Martinón Torres, Director of the National Research Centre on Human Evolution, Burgos, was the first
speaker. She noted that the morphological variability of the Middle Pleistocene hominin fossil record is
central to the debate on the biological processes that gave rise to Neanderthals. She provided an overview
of dental samples from a range of hominin sites from Western Europe including Atapuerca-Sima de los
Huesos, Arago, Mauer, and others, comparing these to assemblages from the Near East and China. The
results suggest that settlement patterns, population fragmentation, local extinctions and other factors may
explain morphological variability maintained by Middle Pleistocene groups until the appearance of classic
Neanderthals in Europe, with Southwest Asia playing a role as “the potential residential area of the source
population that gave rise to the hominins that dispersed into Europe and Asia at different times during the
Pleistocene.”

Professor Antonio Rosas from the National Museum of Natural Sciences, Madrid, tackled genetic and
phenotypic “conceptual frameworks” in Neanderthals noting that “the origin and evolution of the
Neanderthal phenotype is still largely unresolved.” He described an updated model based on that of Rosas
and colleagues in 2006. In the first phase, derived characters appear “involved in the anteroposterior
corporal dimension: midface prognathism, external face of the mandible, invagination of the spine and
lumbar hypolordosis,” these hypothesized to be the result of a specific gene regulation “establishing the
dorso-ventral body axis.” Rosas explained that a second phase, at 300-250 thousand years ago, results in
marked increase in brain size, reduction in stature and modifications in the upper thorax and shoulder
girdle “that affect the position of the mandible.” A genetic transfer event from Homo sapiens to the
Neanderthal lineage is inferred at the time, this requires further study but, he added “the combination of
an evolution of the Neanderthal lineage and the genetic influence of the ancestors of H. sapiens support
the distinction of the Homo neanderthalensis species.”

The final lecture of the day was by Professor Juan Luis Arsuaga from the Universidad Complutense,
Madrid. Juan Luis described how he had been contemplating patterns in history regarding people and
events. This led to palaeontology, and “patterns in the history of life.” This extended to patterns in human
evolution that might be similar to other species. He summarized his lecture noting that “Although it may
seem surprising, human evolution in Europe and that of bears have points in common. We can learn about
the human evolutionary pattern by studying the history of European bears, including current populations.
We are a unique species, but just another unique species.” The talk generated questions about species,
speciation, and related topics, which spilled into the final discussion, and which included themes from
previous lectures.

So, the first day of Calpe had ended. As delegates left the University they were still discussing material
from the day’s lectures. Many, I was sure, also contemplating the lectures still to be delivered over the
two following days.