TNG Global Foundation insisted on Tuesday that the development of the east side project will be handled “sensitively”, against a backdrop of protests from Catalan Bay residents concerned about the impact the project and the proposed marina will have on the area.

On Tuesday TNG published a fly through video of its proposed plans for the east side, adding that the project will “cement Gibraltar’s place on the map as a prestigious destination, providing the community with a sleek, modern, exciting development”.

The developer was asked to make two amendments relating to the residential tower and the reduction of the small boats marina, with each phase of the 10-year project also to be further assessed by the DPC.

For his part, Chief Minister Fabian Picardo said the project will still need to go through the different stages before the DPC to gain full planning permission and reassured residents that the Government “will never permit anything that damages Catalan Bay”.

The plans for the east side project will also see the removal of the rubble tip, which has accumulated in the area as an eye-sore for over 25 years, TNG said in a statement.

“The construction at the Eastside of affordable homes, berths for small boats, and 500 parking spaces - which will be free to use for beachgoers during the peak summer months - will maximise the use of the development for the benefit of the local community,” the statement added.

“TNG has also agreed to take-over the cost of the revetment works at the site of Hassans Centenary Terraces, highlighting its commitment to assist the Government of Gibraltar and the wider community with much-needed infrastructure works in the area.”

TNG said it has the “platform, resources and drive to create a vision” for a mixed-use area that will complement and add value to its surroundings.

The project will be developed over a period of around 10 years, and TNG said it is “well alive to the importance of doing so sensitively”.

“It will embrace the history, culture and uniqueness of the Catalan Bay beach and village, as well as Gibraltar’s wider heritage and history as the gateway to the Mediterranean,” TNG added.

“At the same time, TNG will focus on delivering a project that is environmentally sustainable, to include the latest technology and know-how in this sector, a factor that was positively highlighted by the DPC during the application for outline planning permission.”

“TNG has a clear vision for a project that has been described by the Government of Gibraltar as ‘transformational’.”

“This is geared to complement and improve Gibraltar’s landscape by building a development that will blend into the social DNA of our homeland.”

TNG said it is already an important partner to Gibraltar and its people, and wants to continue to be so.

It cited its acquisition of Jyske Bank, now operating as Trusted Novus Bank, which it said preserved over 100 jobs and thousands of customer relations at a time when Gibraltar faced the loss of another retail bank.

It also highlighted the bank’s donation of £200,000.00 to the GHA’s Covid Fund during the initial stages of the pandemic and its donation of £3.9m to cover the costs of Campion Park.

Additionally, TNG is currently building two new schools for the Government of Gibraltar and will thereafter embark on another mixed-use development in the Bayside area.

“TNG remains committed to continue liaising with the Government of Gibraltar and with other stakeholders, when considering other projects to invest in,” the spokesman said.

“This will serve to further enhance TNG’s relationship with Gibraltar and its people, as well as allow TNG to continue contributing to Gibraltar’s social and economic future.”

The Gibraltar Government welcomed the release of the fly through video by TNG Global on Tuesday.

“The GSLP/Liberal Government promised the residents of Catalan Bay that it would remove the unsightly rubble mountain on the Eastside and this project will achieve that, as well as beautifying the area for all residents of Gibraltar and creating new economic activity,” a spokesman for No.6 Convent Place said in a statement.

“The video by TNG is of the parts of the project that have received outline planning.”

The project will return to the DPC for full planning permission in stages, and the Government said that this will be where the public will be able to make their views known as part of the planning process.

“It was the GSLP/Liberal Government under my leadership that transformed the DPC planning process after it was elected in 2011, busting it open, making it public and the minutes and decisions transparent despite the GSD arguing that it should keep it secret as it used to be under their administration,” Chief Minister, Fabian Picardo, said.

“The Government also subjects itself now to planning for all projects.”

“This project will therefore be subject to the DPC process for full planning which it has not yet received.”

“It is therefore wrong for anyone to suggest that the process of listening and working with residents of Catalan Bay and the wider community is over.”

“This is the beginning of a much wider planning process.”

Mr Picardo said that in a “thriving democracy like Gibraltar”, all points of view of expressed are taken into account.

“I love that about our small but proud nation,” Mr Picardo said.

“The planning process is a part of our vibrant democracy I am particularly proud of, as it is the GSLP/Liberal Government that has opened up the DPC and the planning process to enable all our citizens to have their say and to ensure that projects are improved in the process.”

“We will never permit anything that damages Catalan Bay.”

“The DPC will be listening for any concerns about any part of this project that can be improved.”

“This is a great project for those who will live on the further affordable homes to be built on this site.”

“This is a great project for our economy and, as a result, for our public finances.”

“This is not a project for the rich.”

“This is a project for all of us and for our future generations.”

“The positive economic impact of this project will be massive.”

“I look forward to seeing the full planning stages resolved positively and work starting on this project for our all our people.” 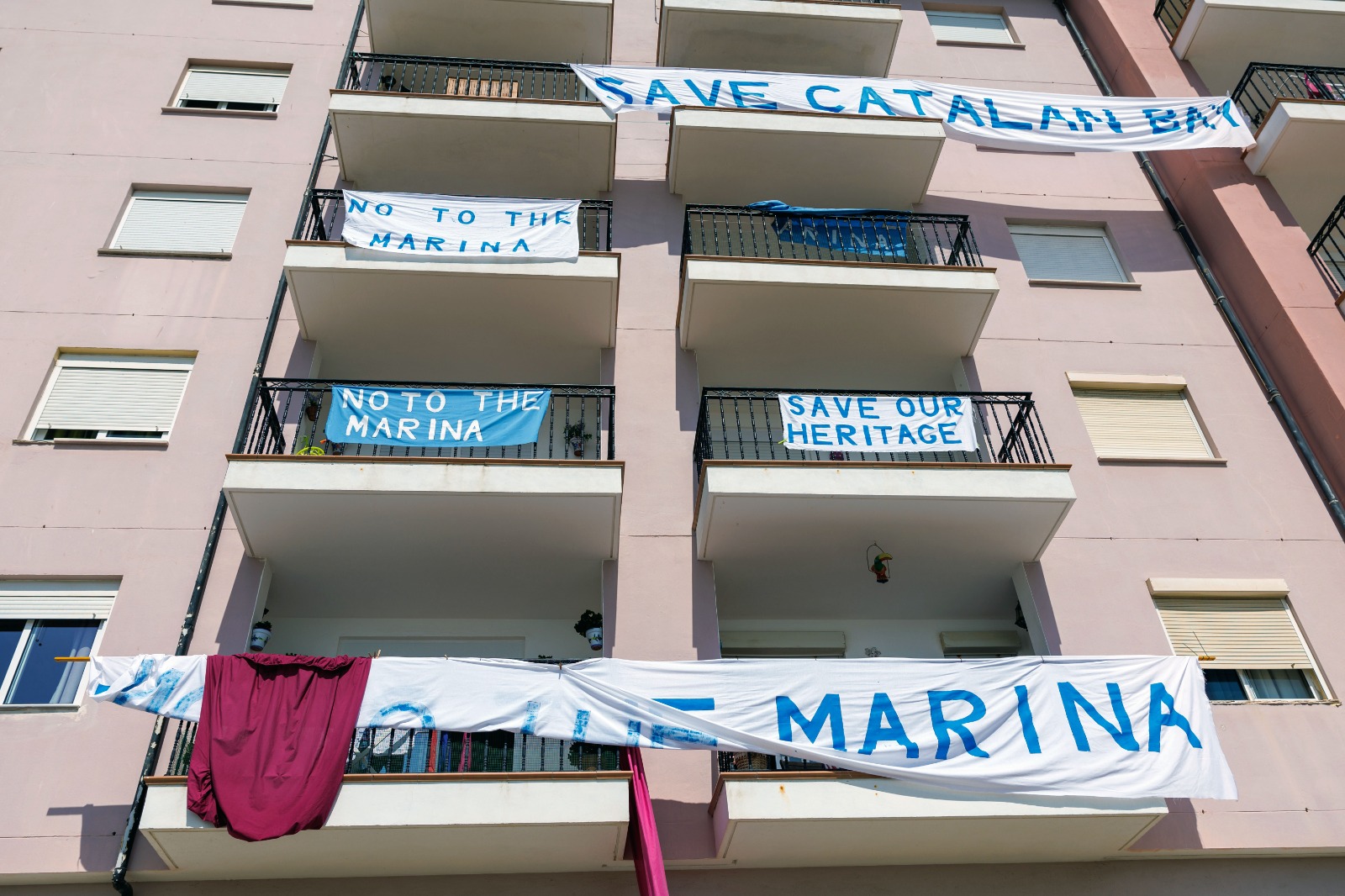 ‘NO TO THE MARINA’

But aspects of the project planned for the east side plot continue to generate concern in Catalan Bay.

Following the granting of outline planning permission, residents of Catalan Bay launched an online petition against the plans for a marina. The petition has already attracted over 2,600 signatures.

On Sunday, residents in Catalan Bay Village unfurled banners protesting against the marina from their homes.

The petition is being organised by the Caleta Youth Committee, which is concerned about the impact the marina project will have on the coastline and the beach itself.

“The youngsters in Catalan Bay decided to form a committee and take the mantle and really tackle this,” Gianni Cumbo, a resident of Catalan Bay and organiser of the petition, said.

“We feel that this is a concern that all of Gibraltar should share we have already surpassed 2,000 signatures.”

“We want to make it very clear that we are opposing the marina [rather than the overall project itself].”

“We know the mountain of shame needs to go and we are fully behind that and support it, but we have an issue with the proposed marina that extends all the way out into the bay.”

“This would enclose the Caleta and create a stagnant pool effect, so the tide that we have naturally with the waves would not clean the beach properly.”

There are concerns about pollution from the marina, as well as the “detrimental” impact it will have on the marine life and the beach itself.

Mr Cumbo said that during the Covid-19 pandemic, when beaches were quieters for months on end, sea life had been returning including bioluminescent plankton and a dolphin that came to the shore.

“The size of the marina and the breakwater according to the plans is going right out to the area of the Caleta hotel, and it will enclose the beach completely,” Mr Cumbo said.

Mr Cumbo said it is “very contradictory” that this is being planned when the government is fighting to protect the environment.

He added that Gibraltar already has four marinas, and very few beaches, and Catalan Bay is “one of the best beaches in Gibraltar”.

He said that although people are not aware of the size of the proposed plans, the petition is gaining more interest every day.

The Caleta Youth Committee will present the Government with the signatures of the petition in due course.