Royal Gibraltar Police officer Tony Gaul climbed the Med Steps 24 times over the weekend, totalling a staggering 76kms and an ascent of 10,000m, to raise money for charity Hope for Grace and local man Wesley Warwick.

Mr Warwick, is a young GDP Officer who has recently suffered a stroke and who will now need a variety of equipment to help him reach his goal of self-sufficiency.

The Hope for Grace charity is raising funds for Grace Beverton, the three-year-old daughter of a police officer in the UK who is one of only 17 people in the world diagnosed with a rare gene mutation which caused her to have multiple life-changing seizures in the early months of her life.

Setting off at sunrise on Saturday he climbed the first of 24 with Wayne the father of Wesley Warwick.

Wayne was there for Mr Gaul’s first climb and also for his last climb just before the sunset on Sunday evening.

“I feel amazing,” Mr Gaul said as he reached the summit of the Rock at O’Hara’s Battery for the last time during his challenge. 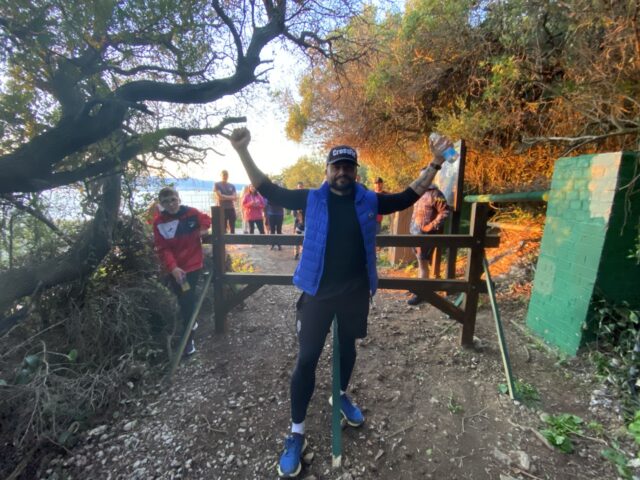 He credits some of the ability to do it down to the support he had around him over the weekend.

“There are so many people to mention and I wouldn’t do it justice because I would forget somebody but the support from the community, the people on Facebook with the likes and the shares,” he said.

“The Chief Minister [Fabian Picardo] supporting it and tweeting it and all of the kids who have done some fitness over the weekend as well.”

“And all of the adults who have done it as well over the weekend. We are probably looking at in two days 100 people.”

“The aim of the challenge was to promote fitness and wellbeing, tick.”

“The aim was to raise awareness of fitness being good for mental health, tick.”

“The aim was to raise a minimum of £5,000 to share between Hope for Grace and Wesley, we have raised more than that, tick.”