The Gibraltar Government has said Gibraltar Fire and Rescue Service believe the fire is extinguished, adding the laying of the new temporary water pipe is complete with the final connection to the reservoir expected later today.

This comes after a water disruption Strategic Coordination Group meeting was held this morning, which was convened by the Deputy Chief Minister, as Acting Chief Minister, Dr Joseph Garcia, at No.6 Convent Place.

The latest information received by the Government from the Gibraltar Fire and Rescue Service is that they believe the fire is now extinguished, however, the affected area is still suffering from a huge amount of heat.

“I would like to once again take this opportunity to thank all those who are currently on the ground working to resolve the water shortage issues we are facing,” Deputy Chief Minister, Joseph Garcia, said.

“I am in touch with the Chief Minister and have briefed him on the latest situation.”

“I have convened a further Strategic Coordinating Group meeting for this evening where we will be receiving the latest information available regarding both the repair works and the state of water levels.”

“The Government has been assured by suppliers that there is ample supply of bottled water in Gibraltar and that water bottles are being delivered across all affected areas.”

“AquaGib have told us that there are now five water bowsers at different points around Gibraltar which are supplemented by an additional five more trucks which are distributing bottled water.”

This was the eighth meeting which has taken place since the fire at Power’s Drive Tunnel began on Tuesday.

The Governor, Vice Admiral Sir David Steel was also present at the meeting together with the Minister for Civil Contingencies Samantha Sacramento. 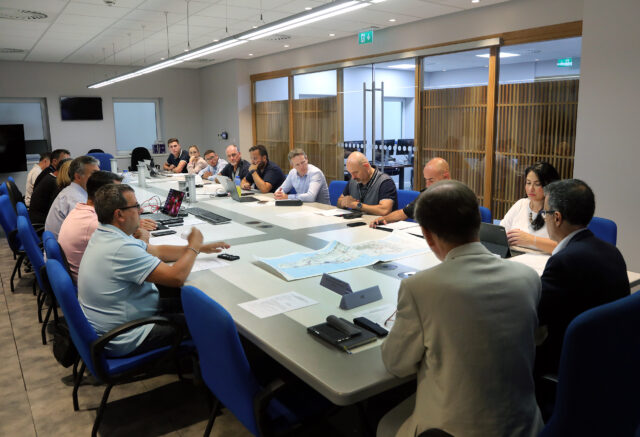 Following the outcome of the meeting, Dr Garcia has briefed the Chief Minister on the latest situation and a further meeting has been convened for later this evening.

“There is also a significant amount of structural damage to the tunnel and geotechnical engineers will be examining the site in coming weeks,” the Government said.

“GFRS expect to scale down their fire-fighting operation shortly, at which point the site will be handed over to the Government’s Technical Services department.”

“The advice to the Government from AquaGib is that the laying of the new temporary water pipe to supply the Governor’s Cottage Reverse Osmosis Plant is complete and that the final connection of this pipe to the reservoir is expected later today.”

“At this stage, however, AquaGib have said that it is not yet clear how long it will take for the Beefsteak reservoir to fill up and for normal water supply to be restored thereafter.”

The Government added as a result of the contingency planning which has been taking place, the arrival of supply from 6 water tankers carrying approximately 25,000 litres of water each was successfully carried out.

These six water tankers are unloading at Hesse’s reservoir and reloading with water in Spain, with this happening in a continuous cycle.

Equipment from the Airport Fire and Rescue Service was set-up overnight to ensure the operation could be carried out successfully and that water can be pumped from the portable tankers into the reservoir.

There is also provision for two of the tankers to be able to unload simultaneously.

“The reason for this is to allow production to be transferred to the Waterworks reservoirs and build up stock,” Aqua Gib said.

“However, as stock levels remain low, there will still be water pressure issues and interruptions on the following day.”

“Unfortunately, as a result of the damage to water pipes, we are currently in a position where stock levels are low.”

“Therefore, this process may not allow full pressure and supply throughout the whole of Gibraltar when the restrictions are removed each morning.”

“This means that although water supply may not be physically cut off, consumers may still not have water because of the low water pressure.”

“Production of water will increase once works are completed and reconnection to the Governor’s Cottage Reverse Osmosis Plant is established.”

AquaGib said it expects stock levels to recover and the daily pressure and interruption issues to reduce.

AquaGib also thanked the public for their continued understanding as they work to improve the situation.

The Government reminded the public that an emergency helpline has been set up for those who are vulnerable, elderly or with disabilities. Those affected should call 20073659 or email hearing@aquagib.gi.