The tunnel fire continued to burn on Thursday afternoon but was now under control, the Gibraltar Fire and Rescue Service said, as it released dramatic images of the horrific conditions that firefighters faced inside.

“It's under control, it's not going to spread,” said Colin Ramirez, the Chief Fire Officer.

“It's nearly extinguished. The only thing is that we cannot, at the moment, risk any more fire officers.”

“So we're doing that periodically. We will be checking in certain instances. But as it stands, it was burning, but quickly decreasing in its intensity. So it's under control.”

Firefighters managed to extinguish the fire in Vault 3 of the tunnel on Wednesday but items stored in the adjacent Vault 4 remain alight, although it appears to be contained there.

Firefighters had overnight been tackling Vault 4 directly but were forced to pull back because of safety concerns.

Mr Ramirez told the Chronicle the GFRS crews had been working in conditions that “go beyond what can be expected of any normal human being”.

“They have worked under very, very risky conditions, to the point where now we've had to withdraw them because at times it was getting a bit too much to be honest.”

There is no confirmation as yet as to how the fire started and police said it was too soon to comment while the GFRS was still tackling the blaze.

The was no confirmation either as to what exactly was alight, although it is believed the fire in Vault 4 may be centred on rubber tiling used to protect the ground for large stadium events such as the music festival, and which was being stored there.

“We suspect it's plastic tiles that were used for to cover the pitch for GMF,” Mr Ramirez said.

“But again, that has to be confirmed. The problem is that there's near zero visibility so the crews are working in extremely challenging conditions. We can't really investigate.”

The fire started at around midday on Tuesday and the emergency response has been non-stop since then, with the GFRS supported by the Royal Gibraltar Police and other agencies, alongside utilities operators AquaGib and GibElec.

Protecting the integrity of the nearby reverse osmosis water plant has been a top priority since day one, but yesterday it emerged that a collapse in the tunnel had damaged pipes and cables.

The plant itself has not been operational since Tuesday because power was cut, with the Gibraltar implementing water restrictions on Thursday to ensure supply to the community and essential services.

And even after the fire is extinguished – and there is no guarantee as to when that will be given the “incredibly unpredictable” nature of the blaze – it may take some days to make the area safe,

"If it is what I think, which is plastic, that takes time,” Mr Ramirez said.

“But nevertheless, even after the fire is extinguished, it will be a while for that to clear up, and for us to ventilate the whole area and make it safe, because you won't be safe because of roof collapses and so on.”

The road between Sandy Bay and Europa Point has been closed to the public since Tuesday and will remain closed for now, though officials will assess whether it can be opened in the coming days. 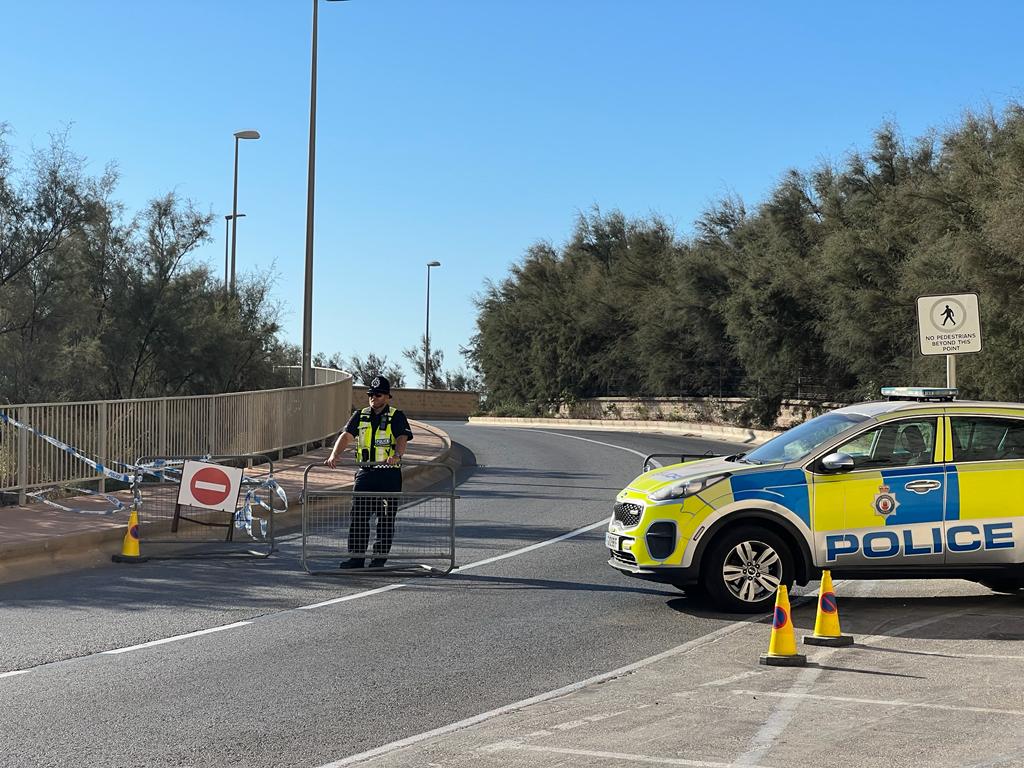 The road between Sandy Bay and Europa Point remained closed again on Thursday as firefighters continued to battle a blaze in a tunnel on the east side. Photo by Johnny Bugeja

At present, there is no concern that the fire could cause external rockfalls although the area is under constant monitoring.

For the firefighters, a key priority is to manage the impact on crews of working in intense heat of up to 120 celsius in the tunnel, and emerging into scorching summer heat outside.

“Obviously the fatigue is setting in,” Mr Ramirez said.

“But we're resting [the firefighters] and we have the necessary rotations.”

“We're trying to look after them at the same time as they perform tasks they need to.”

“We're trying to limit the numbers [actively fighting the fire] as much as we can in the risk area.”

Currently the fire is being monitored using remotely controlled equipment.

Mr Ramirez said this had been the most challenging fire he had seen during his years in the service.

And he had a message for the community.

“Basically, thank everyone,” he said.

“The public for the support that we've been getting these past few days, and that our crews have been getting, and thank all the department heads of partner agencies that are working hard as well.”

“So I think that it's important for us to remember everyone and obviously, me personally, thank my crews for the incredible work that they've been doing over two days.”