Unions urge ‘investment not cuts’ in May Day messages

Gibraltar’s two main unions on May Day called for the protection of workers against the backdrop of a battered economy, urging an end to poor employment practices and warning against austerity while highlighting the need for measures to address the impact of the rise in cost of living.

Unite the Union said the Gibraltar Government should target “investment and not cuts” as the key to ensuring Gibraltar recovers after the pandemic.

It said a long-term plan for economic recovery was needed, “not short-term decisions to balance the books”.

And with Gibraltar facing a massive deficit in its public finances, the GGCA echoed Unite’s concern about the impact this could have on workers.

“In the context of the working world, and the GGCA in particular, this has meant no public sector cost of living raise for the past two years,” the GGCA said in a May Day statement.

“With the recent 4.3% IRP increase, the uplift in social insurance payments and the rising cost of electricity, many of our entry grade members have been feeling the pinch.”

“We have been given a clear mandate to voice our members’ concerns on this matter, as we may well have to tackle the persistent rumours of civil service posts being axed as the Government of Gibraltar prepares this year’s budget.”

“Faced with these difficulties, it is essential for us to properly represent our members, addressing their needs and concerns, whilst still being mindful of the wider economic scenario and taking a responsible approach to trade unionism, that is also accountable to our community as a whole.”

The unions were speaking ahead of a rally on Sunday organised by Unite the Union, the first time since the start of the pandemic that the traditional May Day event had been hosted.

But the long weekend and warm weather meant attendance at the rally was low. 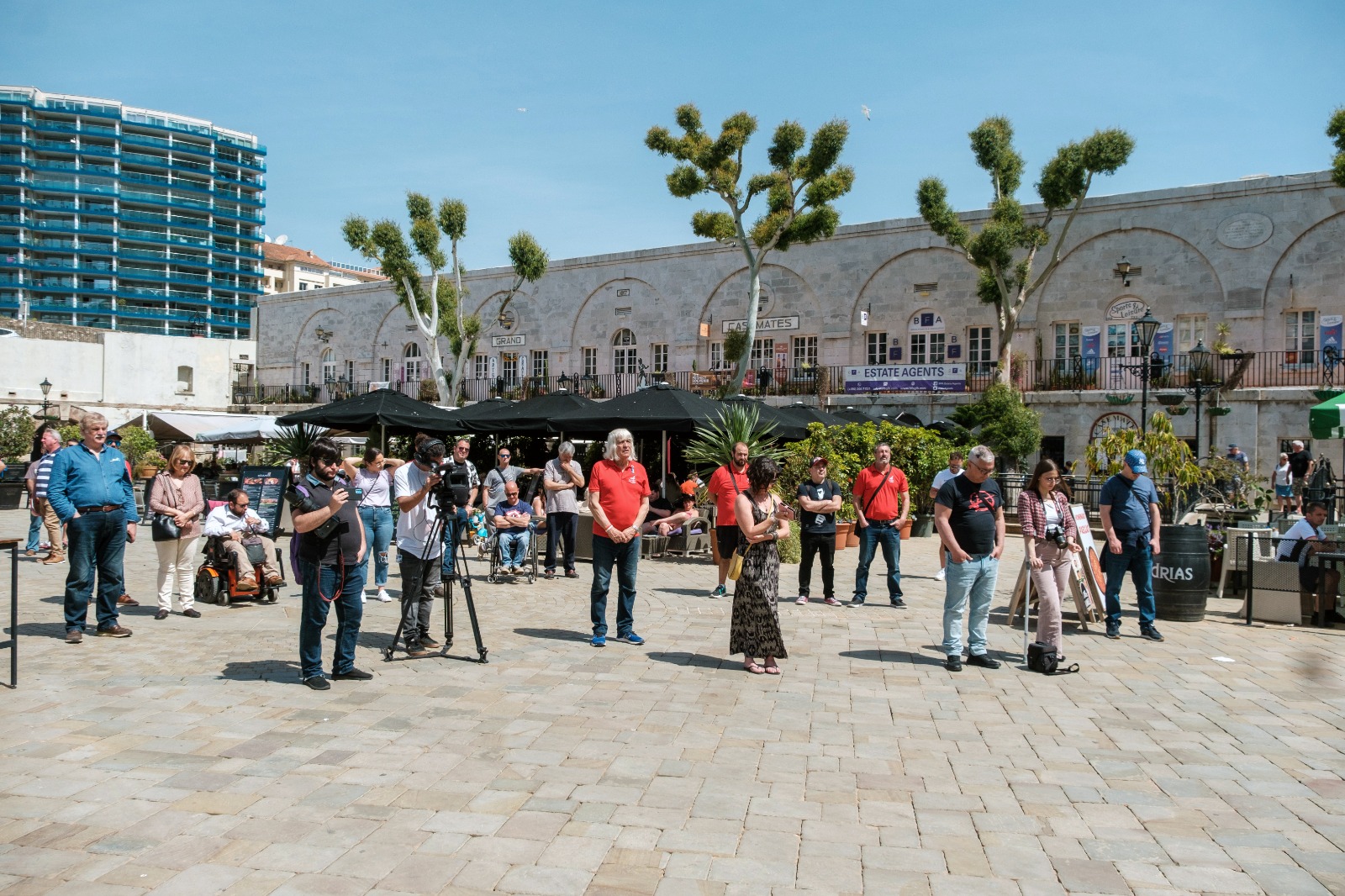 Speaking in Casemates, Unite’s Christian Duo played down the importance of the low turnout.

“It has been two years since we have been able to celebrate or commemorate international workers day so basically it was fundamental that coming back to the stage was something we had to do, regardless of the fact that it was an extra-long bank holiday and we knew there would be a lot of people going away on holiday after two years of not being able to do so because of the restrictions from the Covid pandemic,” he said.

“For us it was a situation where, regardless of what we thought the turnout was, which we knew was going to be low, we had to do it.”

“If not we obviously weren’t doing the right thing for working people, which is delivering our speeches on the day it should be after successfully campaigning to reintroduce the first of May as a bank holiday.”

“Let's not forget the significance of the day, remembering the struggles and hard-fought victories of our ancestors and trade unions, and thank them for the workers’ rights we enjoy today.”

Mr Duo said workers in the private sector must be enabled, where they choose, to be collectively represented and their conditions of employment bargained by a trade union.

He said it was time to pass into law the long-awaited statutory trade union legislation to give working people the choice as to whether they wanted to be represented individually and collectively by a trade union.

“There is clearly a need to bargain for better terms and conditions in all corners of the private sector,” Mr Duo said.

“But as Unite has stated on many occasions, employers need not to fear the union unite has worked and continues to work constructively with employers across both the public and private sector.”

“We now call on government to make this piece of legislation a reality after years and years of campaigning and commitment after commitment not seen the light of day.” 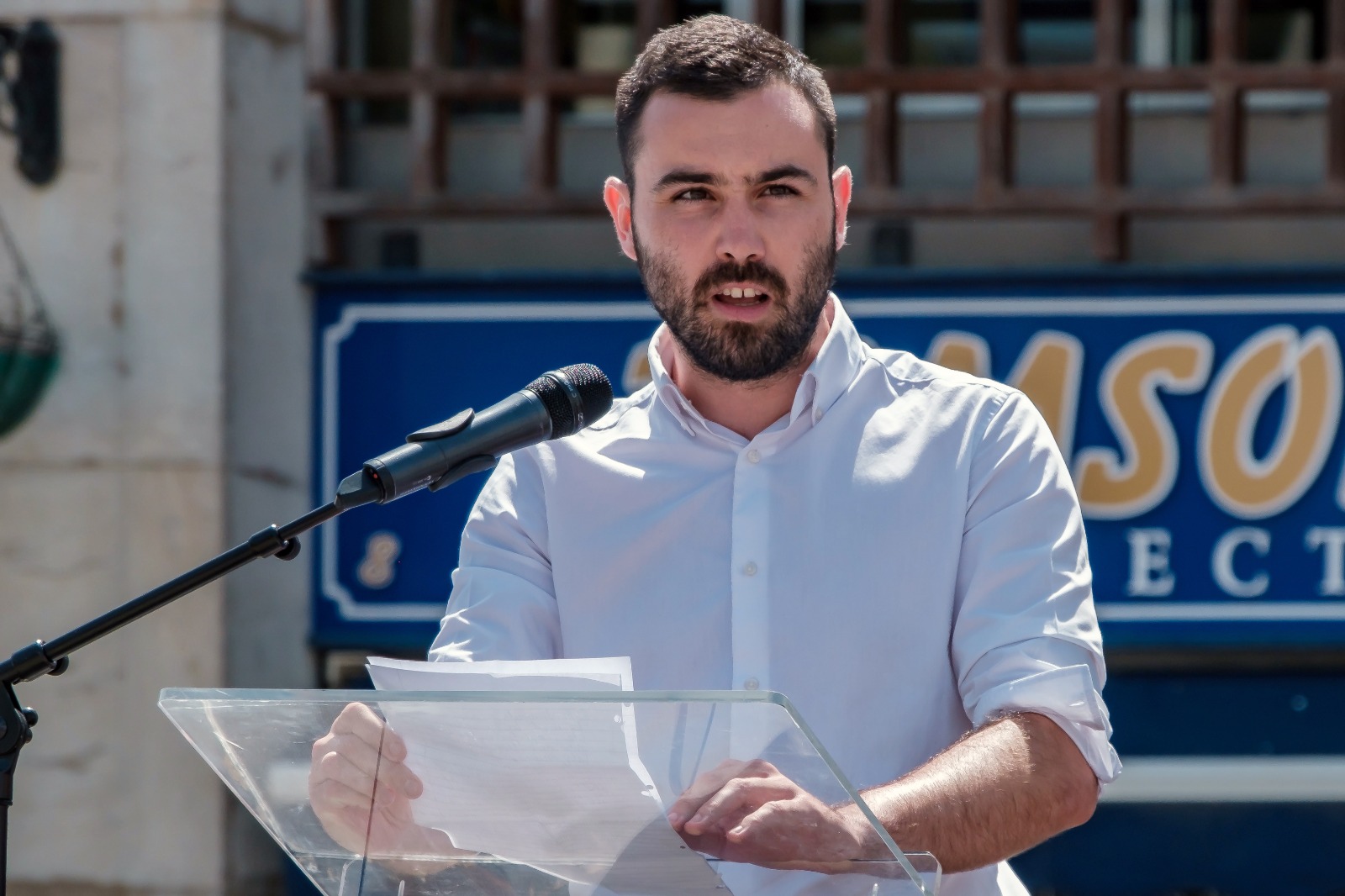 Unite regional officer Sam Hennessey reflected on the role played by GHA workers during the pandemic, highlighting recent progress in reaching agreements with the GHA and calling on the authority to ensure workers were well treated going forward.

And he cautioned against any attempt to divide workers in the public and private sectors.

“Some tried to claim that one is picking the pockets of the other,” he said, adding: “This is wrong. This is false.”

“The reality is, brothers and sisters, austerity and cutbacks will never work they never have worked and only real investment will benefit workers and our society at large,” Mr Hennessey said. 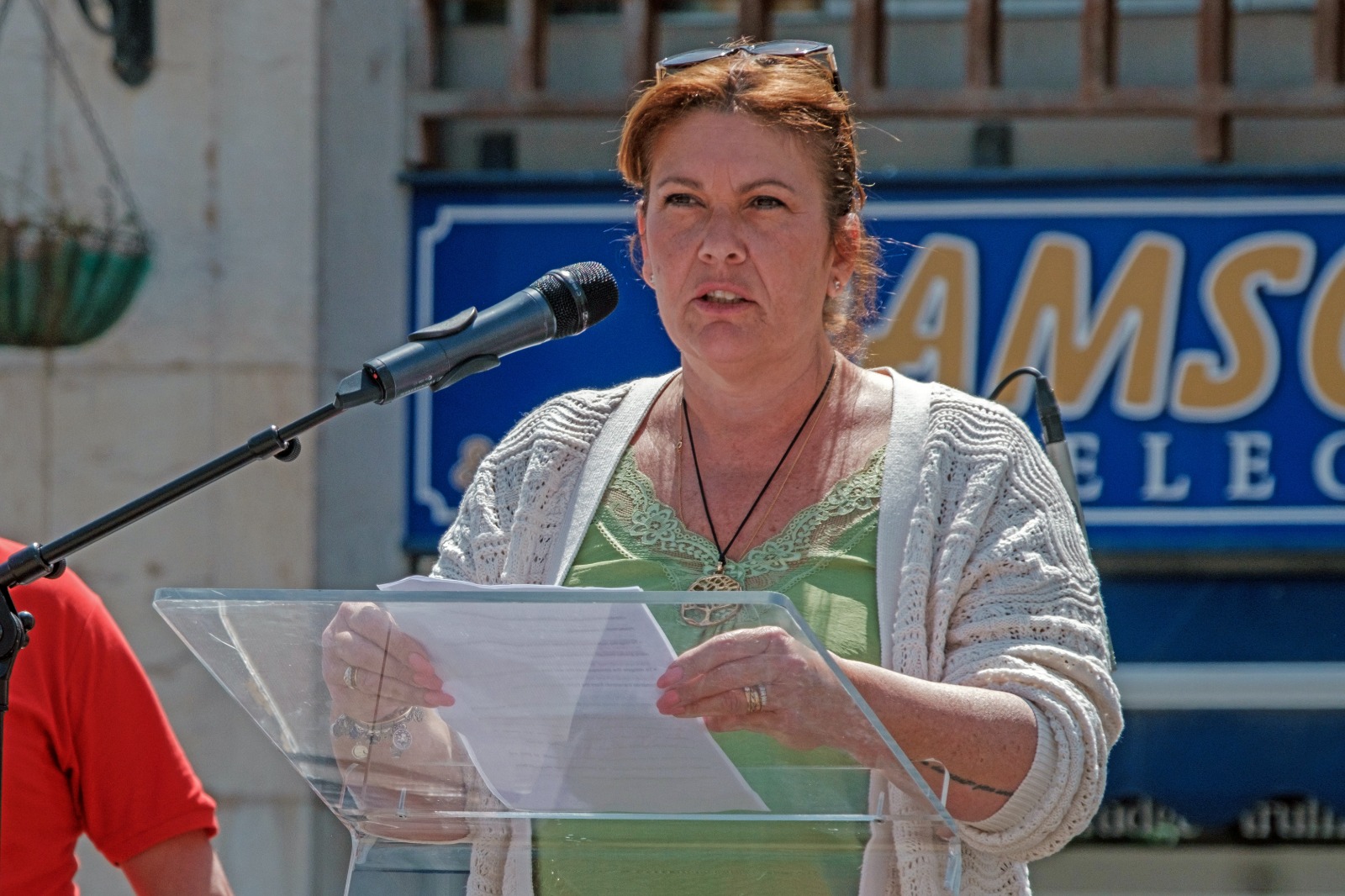 Unite regional officer Gillian Birkett said Unite’s priority was working to ensure that members had the recognition and respect they deserved.

“It is important that government engages in meaningful and transparent collective bargaining with the unions...” she said.

“Unite cannot agree to a one-sided decision-making machinery disguised as a united front, which has today meant pay restrictions, a 4.9% IRP, an increase in privatisation within government departments, the erosion of workers standards of living and the depletion of a public sector.”

She added Unite would oppose any privatisation of public services, or the replacement of human labour by technology and other measures.

“We need a joint approach from all stakeholders and for management and ministries to work on a quantified analysis before any decisions are taken,” she said.

“And for governments to make sure that change is sustainable in the medium and long-term future of public service.” 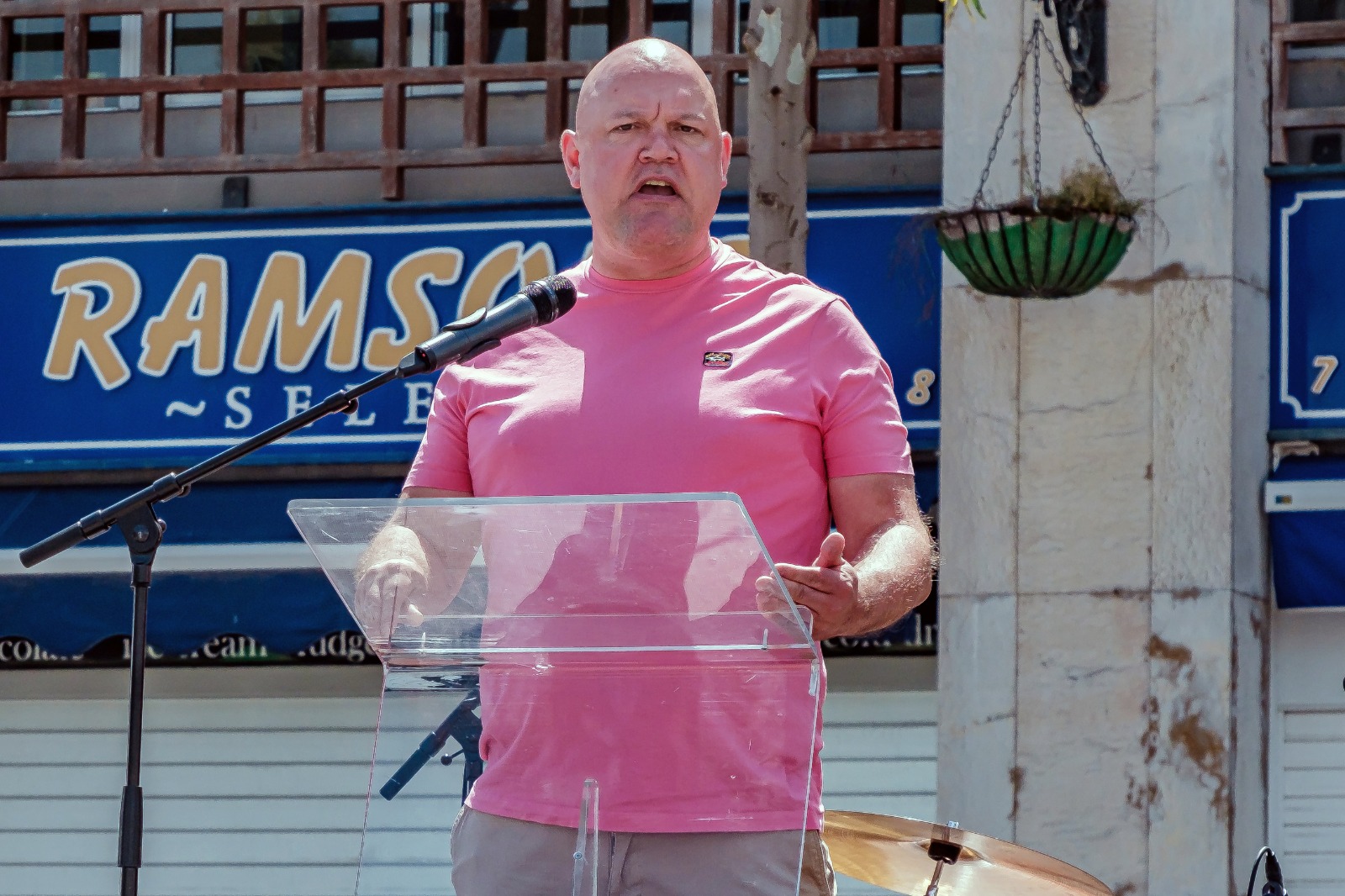 Unite’s national officer for Gibraltar, Stuart Davis, echoed that message and said now was not the time to pitch worker against worker.

“And that is why that repeated proclamations around the unsustainability of the public sector here in Gibraltar, or the private sector funding the public sector, are unnecessarily divisive.”

“Gibraltar successfully faced challenges in the past. And for the challenges ahead, we need unity and not division.”

In common with other speakers, Mr Davies called on the Gibraltar Government to “steer away from all and any” austerity measures in Gibraltar, adding the union would fight any such steps if need be.

“There is another way, and that is a long term economic plan to grow back out of the financial shock caused by Covid, not short term savings to balance of books,” he said.

“We need investment in quality jobs and quality conditions across all sectors of the economy.”

“We need investment in quality training and quality skills, we need proper pay rises, particularly for those are lowest paid, and we need an increase in the minimum wage.”

“And we also need collective bargaining across the whole of Gibraltar. And this is absolutely vital.”
“We need a more equal, a more inclusive and a fairer Gibraltar.” 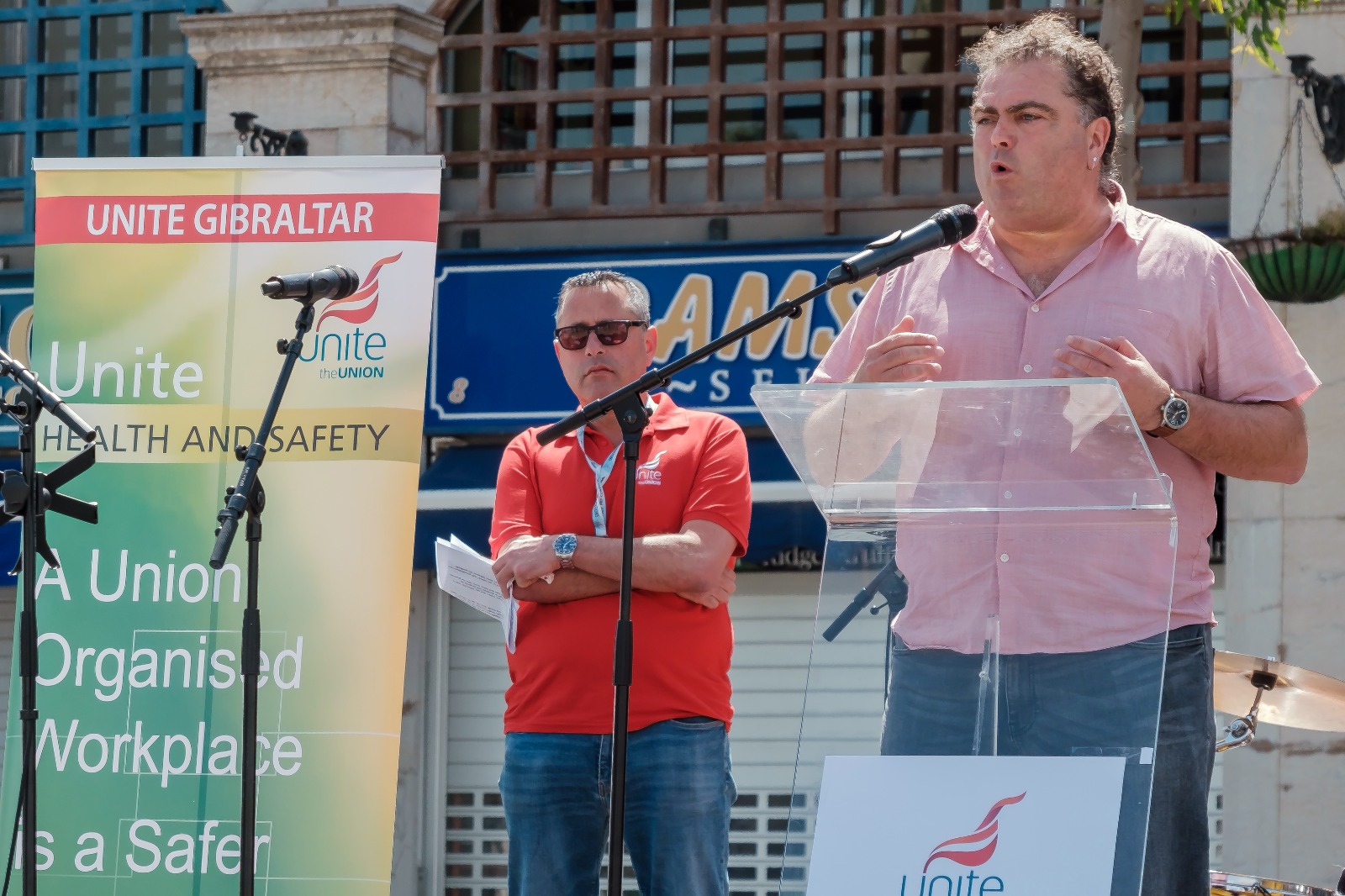 The rally heard too from Gibraltarian trades unionist Manuel Cortes, the general secretary of the UK GSSA union, who reflected on international developments and how these could affect workers.

“We live in very dangerous times,” he said.

“We have got the rise of the far right in Europe.”

“Across the border in Spain, we've got Vox.”

“In France, we had a run-off for the president between a fascist, LePen, and Macron.”

“And none of those two candidates actually represented the interests of working people.”

“What we have to do is build the alternative, build a Socialist alternative, that can deliver a different world a better world for working people.”

For its part, the GGC said in a May Day statement that Gibraltar must analyse what essential areas should be protected from cuts and savings against the backdrop of a “drastically reduced” economy.

It singled out health and safety as a prime concern, citing the problems faced by its members in the DSS who were housed in a building that was so damaged by water penetration, a ceiling caved in and the electrics were deemed unsafe.

“The entire workforce was inside the building when an electrical socket exploded, leaving scorch marks on the wall,” the union said.

“These officers have avoided serious injury through sheer luck and their urgent evacuation from their premises earlier this year should serve as a lesson to the GGCA and to all employers: no cost cutting that compromises the safety of workers should ever be tolerated.”

The GGCA also said issues impacting the care of vulnerable members of the community should be prioritised.

It welcomed news that supply SNLSAs would be offered permanent contract, while noting that 75% of SNLSAs at St Martin’s School were supply workers.

“This is the workforce that supports and cares for our special needs children, one of the most necessitous groups within our community, who deserve the very best standards of care,” the union said.

“Continuity of care, where the children can develop and sustain relationships with their carers is paramount, therefore keeping SNLSAs in insecure contracts of employment in this school is certainly something that should be eradicated.”

“Indeed, ensuring proper training and the retention of experienced SNLSA staff should remain a matter of priority, irrespective of our financial circumstances.”

The GGCA also called for fair distribution of available resources, citing the ongoing dispute at HM Customs over the decision to exclude the marine section from the normal staff rotation.

Union members in Customs felt opportunities for training, development and promotion had not been fairly distributed for the last six years, the GGCA said.

“Needless to say, there are many challenges ahead for the GGCA, and indeed for all trade unions in Gibraltar,” the union concluded.

“In these difficult times, we need to listen carefully to our members, respond quickly to the most urgent and pressing matters raised and, most importantly, pick our battles wisely.”

“Only in this way we can ensure that we protect those most in need of our defence, and that we do not fail to help those who need our help the most.”