The president of the European Commission has said the EU remains determined to forge a "close partnership" with Britain after Brexit.

As the European Parliament prepared to vote on Boris Johnson's Withdrawal Agreement yesterday, Ursula von der Leyen said in an emotional message to the UK: "We will always love you."

MEPs were meeting in Brussels to ratify the agreement, paving the way for Britain to leave with a deal in place on Friday.

Addressing the parliament, Mrs von der Leyen said it would only be a "first step", with negotiations set to start on a trade agreement once Britain is formally out.

"From now on, it's about our new partnership with the United Kingdom. The negotiations are about to start," she told MEPs.

"And just to be very clear, I want the European Union and the United Kingdom to stay good friends and good partners."

She quoted the poet George Eliot, saying: "Only in the agony of parting do we look into the depth of love."

She added: "We will always love you and we will never be far, long live Europe."

"It is sad to see a country leaving that twice liberated us, has twice given its blood to liberate Europe," he said.

He predicted, however, that the UK would eventually rejoin, with many British people deeply unhappy at the prospect of leaving.

"In the last couple of days, I have received hundreds of mails from British citizens saying they desperately want to stay or return," he said.

"So this vote is not an adieu, this vote, in my opinion, is only an au revoir."

He poured scorn on claims by supporters of Brexit that it would mean Britain recovering its sovereignty.

"What is in fact threatening Britain's sovereignty most - the rules of our single market or the fact that tomorrow they may be planting Chinese 5G masts in the British islands?" (PA)

However, Brexit Party leader Nigel Farage said the UK was "never coming back" as he gave his final speech in the parliament.

"This is it, the final chapter, the end of the road, a 47-year political experiment that the British frankly have never been very happy with," he said.

Mr Farage said that he hoped Britain's departure would start a debate across the rest of Europe about the EU's future.

"I'm hoping this begins the end of this project. It's a bad project, it isn't just undemocratic, it's anti-democratic."

As he finished, he and the other Brexit Party MEPs waved Union Flags, drawing a rebuke from the chair for their display.

The debate in Brussels follows the completion last week of the passage of the Withdrawal Agreement Bill through the British Parliament at Westminster.

The agreement settles the terms of Britain's departure, including future citizens' rights, the arrangements on the Northern Ireland border and the UK's divorce settlement.

It also allows for an 11-month transition period, during which the UK will continue to follow EU rules while talks take place on a free trade agreement.

Mr Johnson has said he wants a comprehensive deal - covering all aspects of Britain's future relationship with the EU, including security - by the end of the year.

He has been adamant that he will not contemplate any extension of the transition period beyond the end of 2020.

However, senior EU figures have repeatedly warned that reaching such a wide-ranging agreement will not be possible within such a tight timetable.

They have cautioned that the UK cannot expect to enjoy the "highest quality access" to European markets if - as Mr Johnson is insisting - it refuses to align with EU rules after Brexit. 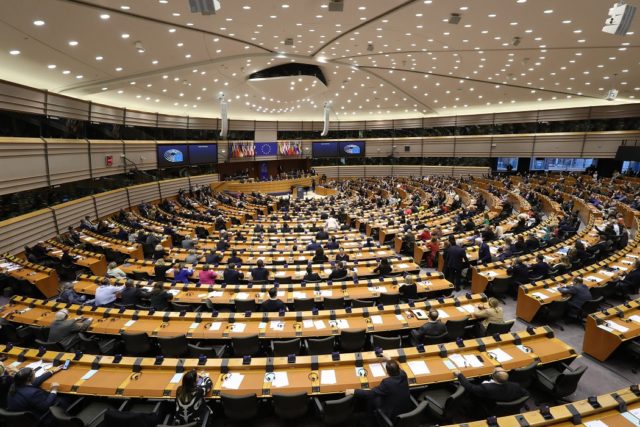 The EU Parliament was packed out with politicians, press and spectators ahead of the final vote on the Withdrawal Agreement - the last hurdle before the UK's departure from the EU on Friday.

Crowds of international news crews lined the walkways between the parliamentary buildings trying to flag down passing MEPs and diplomats for interviews.

A packing case had been placed outside each UK MEP's office to make way for new arrivals from the remaining EU 27 next week.

An exhausted-looking Nigel Farage could also be seen being chased by reporters for a soundbite.

The Brexit Party leader had reportedly been persuaded to pack up his office and unpack again several times so he could pose up with his boxes for photographers.

One departing MEP remarked that she had not been approached for a single interview from the British press since her arrival in Brussels in May, only to give 15 in a day.

Before the final debate on Brexit - seen by many as a victory for populism - the Parliament honoured the 75th anniversary of the Liberation of Auschwitz.

The commission president said: "Europe rose with the intention never again to give quarter to absolute evil.

"It didn't start in Auschwitz. It started much earlier in people's mind. It started with the weakening of the ability to be angry at the denigration that other people fell victim to.

"It started with brutality and hate speech against the Jewish community and then acts followed these words that became the unspeakable crystallisation of these words."

She added: "Europe rose with the firm will never again to give any quarter to absolute evil. Europe knows like no other continent, do not let it take root. Never, ever again."

It was standing room only in the press gallery as camera crews lined up for the speeches ahead of the vote.

"I will be honest, if you could stop Brexit by voting 'no' today then I would be the first to recommend it.

"It's a sad issue. Sad to see a nation leaving, a great nation that has given us all so much economically, culturally, politically, even its own blood in two world wars.

"It's sad to see a country leaving that twice liberated us, twice gave its own blood."

He described Brexit as "a failure of the union".

"Yes, it is also our failure. We have to recognise that in our debate. There is a lesson to be learned," he said.

The final vote on the Withdrawal Agreement is due to take place at 5pm UK time.

Ms von der Leyen said: "We will miss you but we will always keep up our friendship with you and you can count on us as we know we can count on you."

But there were cheers in the chamber when she emphasised that the condition of a "unique" free trade agreement would be that British and European businesses "continue to compete on a level playing field".

But Mr Farage contradicted her in his speech, saying: "(Boris Johnson) has made it clear, he has promised us, there will be no level playing field.

"Once we have left, we are never coming back and the rest, frankly, is detail."

He added: "What we have proved is that the British are too big to bully, thank goodness.

"I hope this is the beginning of the end of this project, it's a bad project. It's undemocratic, in fact it's anti-democratic. It gives people power without accountability."

He described the current global political climate as globalism against populism, adding: "You may loathe populism, but I tell you a funny thing, it is becoming very popular."

Mr Farage, who had decorated his seat with his own flags, ended up being cut off by the speaker as he listed the "benefits" of populism.

"No more financial contributions, no more European Court of Justice, no more Common Fisheries Policy, no more being talked down to, no more being bullies. No more Guy Verhofstadt," he said.

Deputy speaker Mairead McGuinness told him: "Sit down, put your flags away or take them with you if you're leaving now."

"Now is not the time to campaign to rejoin but we must keep the dream alive, especially for young people who are overwhelmingly pro-EU," she said.

"I hold in my heart that one day I will be in this chamber, celebrating our return to the heart of Europe."